No. 9 Georgetown overcame a 17-point second half deficit to take down No. 20 Marquette in Wednesday's feature game.

Share All sharing options for: Duke Goes Down And Georgetown Uses Late Rally To Stun Marquette

Meet me in the Farg, Duke's goin' down.

Sorry, that was in my head, and when something's in my head I have to type it out and spread it to the masses (both of you). It's an unfortunate tick. One that ultimately ruined my academic career.

GAME OF THE NIGHT: Georgetown 73, Marquette 70

Almost unbelievably, Marquette blew a 17-point second half lead in a January Big East road game for the second time in as many years. A season ago it was Louisville (they actually led by 18 points in that game), Wednesday night it was No. 9 Georgetown, which extended its winning streak to 11 games.

The Hoyas, thanks in large part to Jason Clark and Henry Sims, just keep finding new ways to win. The bigger story, though, might be Marquette, which has lost 3-of-5 since beginning the season 10-0 and appears to have an abundance of issues heading into the heart of Big East play.

It's all been a little too much to take for SB Nation's Anonymous Eagle, which was finally sent over-the-edge by last night's events. 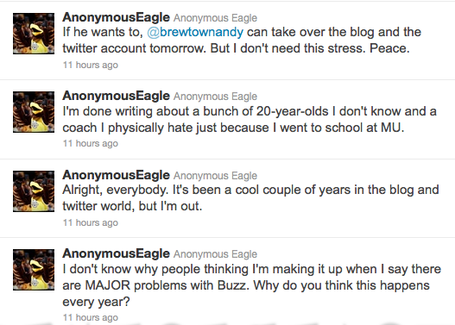 The Owls, playing without two starters, ended a nine-game losing streak to Duke with a near wire-to-wire victory that was easily their best performance of the season. The Blue Devils have now lost a non-conference road game to an unranked opponent in each of the last four seasons. It was also the fourth straight season where Temple has defeated a top ten opponent.

With all due respect to Temple - which notched a signature victory and has just as much of a shot at winning the A-10 as anybody - the major question born of this upset is just how good the No. 5 team in the country actually is.

The Blue Devils' Maui Invitational run doesn't look as impressive now as it did at the time, but their Nov. 15 victory at Michigan State continues to carry more weight every day. Aside from Wednesday's upset and the 22-point pummelling Duke took at Ohio State, there's really not much else significant evidence to study.

Still, I don't think there's any question that Duke is a flawed team. The Devils don't have an NBA player in their front court, they don't play defense like any Duke team I can remember and they've now been handed an embarrassing loss in each of the two true road games they've played. This team - as it stands - is simply not a national title contender.

Stutz dropped 29 points to go with ten rebounds, four assists and three blocked shots in the Shockers' big 67-66 win over Evansville. The Purple Aces had been 2-0 in Missouri Valley play.

Colt Ryan, Evansville - Scored a game-high 31 points in the loss.

Jason Clark, Georgetown - Absolutely took the game over with the Hoyas down 17 to Marquette and a little over 12 minutes to go. Finished with a game-high 26 points.

Jamelle Hagins, Delaware - Went for 21 and 18 as the Blue Hens edged Hofstra by a point to move to 2-1 in the CAA.

Truck Bryant, West Virginia - Hit 4-of-5 3-pointers and scored 29 points as the Mountaineers blew past Rutgers, 85-64.

IMAGE OF THE NIGHT: 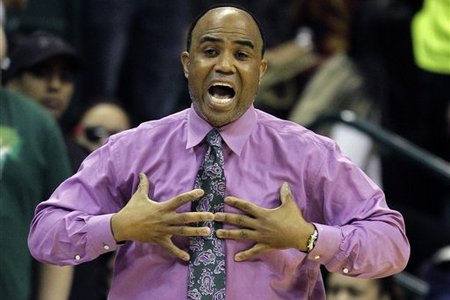 This is not an appropriate Charlotte 49er outfit, Alan Major.

QUOTE OF THE NIGHT: "I've never in 27 years, including coaching 13-year-olds, I've never been part of a game where our team got its tail whipped in the physical part of the game the way we did today.'' --Kansas State head coach Frank Martin after his team's 67-49 loss to Kansas.

1. Yancy Gates did not start for Cincinnati in his first game back from a six-game suspension for his role in the brawl with Xavier, but he did receive a rousing ovation from the Bearcat crowd when he checked into the game during the first half. He played 21 minutes and grabbed a team-high eight rebounds to go with six points as UC stomped Notre Dame, 71-55. Cincinnati is now 7-0 since the fight.

2. On the other end of the spectrum is Xavier, which was unbeaten and on top of the world before the brawl, but has now dropped five of six after Wednesday's 80-70 A-10-opening loss to La Salle. It's impossible to know what to make of the polar opposite reactions to this brawl...Zip 'em up?

3. Kansas has now taken 43 of the past 46 meetings with Kansas State, which is crazy for any conference series, let alone one between in-state rivals. The Jayhawks outrebounded the Wildcats 50-26, prompting the Frank Martin quote above.

4. Another night, another win for Murray State. The Racers were pushed slightly by OVC rival Eastern Kentucky, but ultimately walked away with a 76-67 victory to move to 15-0. They're now one win from matching the school's all-time best start set in 1935-36.

5. Northwestern fell 57-56 to Illinois in a game it once led by ten points. The Wildcats are eventually going to have to start pulling some of these out if they want to make the NCAA Tournament for the first time in program history. We all want this to happen, guys. Help us out.

6. Iowa hadn't won back-to-back Big Ten road games since 2007, but just achieved the feat by knocking off Wisconsin (which never loses at the Kohl Center) and a Minnesota team that had been 10-0 at home. Keep in mind that this is a Hawkeye squad which lost to Campbell by 16 earlier this year. It's going to be a wild few months.

7. Towson tied the record for fewest points in a CAA game with its performance in a 60-27 loss to Drexel. The Tigers (0-15) also tied the NCAA record for consecutive losses at 34.

8. Georgia State has now won 11 in a row after last night's 55-53 victory over CAA favorite VCU. The Panthers (11-3, 3-0), who were picked to finish 11th in the league before the season, haven't won more than 12 total games or finished better than 8th in the conference since joining the Colonial in 2005. First-year head coach Ron Hunter would warrant some consideration for Mid-Season Coach of the Year, you know, if such an award actually existed.

9. Northern Iowa snapped a three-game losing streak by routing Indiana State by 17. I'm telling you, take off work or skip school for the first two days of Arch Madness. That tournament is going to be insane.

10. Memphis won its rematch with Tennessee by the convincing final count of 69-51. The Tigers also topped their in-state rivals at the Maui Invitational in a two-point double overtime thriller in November. The Volunteers are just not very good.