Share All sharing options for: NIT Tournament 2012 Bracket: Second Round Games Are Set

The 2012 National Invitational Tournament is off to a rousing start, finishing up its first round on Wednesday night before Thursday's NCAA Tournament is able to overtake it. The NIT's first round went about as expected, but the bracket did see one surprising upset.

The top-seeded Arizona Wildcats lost to the Bucknell Bison, showing either that the seeding was a bit off or that the Pac-12 really was as awful as everyone said it was this season. The other top seeds all advanced as the Washington Huskies, Seton Hall Pirates and Tennessee Volunteers are all into the second round of the annual also-ran tournament. 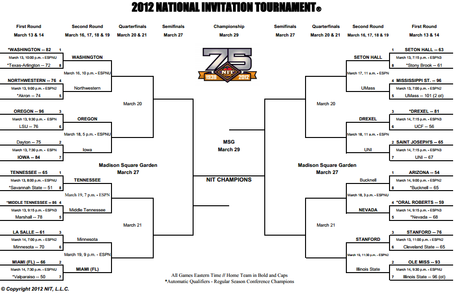