Missouri Vs. Norfolk State: The Best Reaction Photos And GIFs From Both Teams

Share All sharing options for: Missouri Vs. Norfolk State: The Best Reaction Photos And GIFs From Both Teams

For the first time since Hampton knocked off Iowa State in 2001, a No. 15 seed has upset a No. 2 seed. The Norfolk State Spartans will live on in infamy forever for their defeat of the Missouri Tigers, and some of the images from the post-game aftermath are just as good as the famous image of Hampton coach Steve Merfeld kicking his legs as he was being lifted off the ground. After the jump, you can find the best photos and GIFs of both teams' reactions.

Phil Pressey was Missouri's best player. He had a good look at a three to win the game at the very end, and he was devastated when he hit the back iron. 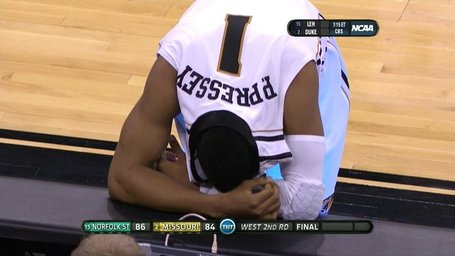 Kyle O'Quinn had, surprisingly, a much happier reaction than Mr. Pressey.

And the best shot in all of this: O'Quinn's face as he was being interviewed by Craig Sager. 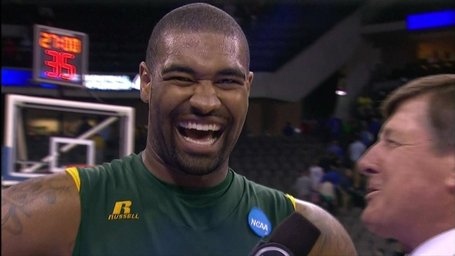