Share All sharing options for: NIT Tournament 2012 Schedule And Bracket: Drexel, Oregon, Iowa Among Teams Looking For Spot In Quarterfinals

Though upsets in the NIT don't quite carry the drama of, say, Lehigh over Duke or Norfolk State over Missouri, there have still been plenty of shockers in the National Invitational Tournament. In action on Sunday will be two No. 7 seeds and a No. 8 seeds that knocked out the one-and-two-seeds they played in the first round. These teams will try to keep their improbable runs alive when second round action continues Sunday.

First up will be the third-seeded Drexel Dragons against the seventh-seeded Northern Iowa Panthers, who upset Saint Joseph's in the first round. After winning 25 of their last 27 games, many felt Drexel should have been included in the NCAA tournament field. After the Dragons' 81-56 demolition of Central Florida in the opening round, they have something to prove. This game will tip off at 11 a.m. (ET) on ESPN.

Following the conclusion of that one, the Bucknell Bison, an eight-seed fresh off an upset of top-seeded Arizona, will take on fifth-seeded Nevada on ESPNU at 3 p.m. (ET). Bucknell, Lehigh's Patriot League companion, has all the momentum, but Nevada, which usually finds itself in the NCAA tournament, would appear to have the talent edge.

Finally, the last of the trio of games at 5 p.m. (ET) on ESPNU will feature third-seeded Oregon out of the disaster that is the Pac-12 against Iowa, the seventh seed, which beat Dayton in the first round. Oregon has had an up-and-down season and Iowa head coach Fran McCaffery (formerly of Siena) would love to see that take a turn for the latter. Here's the full bracket: 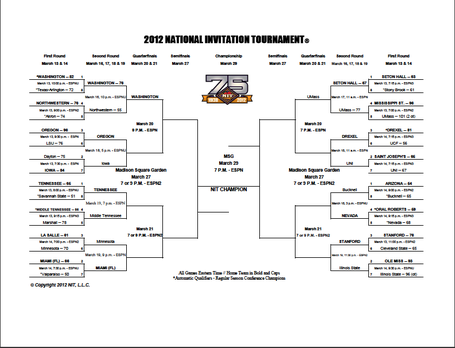