Saint Louis Billikens Might Not Be NCAA Tournament Material, But They Make Great GIFs

Share All sharing options for: Saint Louis Billikens Might Not Be NCAA Tournament Material, But They Make Great GIFs

The Saint Louis Billikens were able to advance in the 2012 NCAA Tournament bracket with a win over the Memphis Tigers on Friday, but the odds are not in their favor at making the Sweet 16 by way of upsetting the Michigan State Spartans.

The odds are in favor of the Billikens doing awful things during a basketball game to make excellent gifs, however, as the first 10 minutes of Sunday afternoon's matinee have already proven. A sample is included below.

Notice the beautiful gooseneck follow-through on the above three-point attempt ... and then notice the ball coming up about three feet short of its intended target. 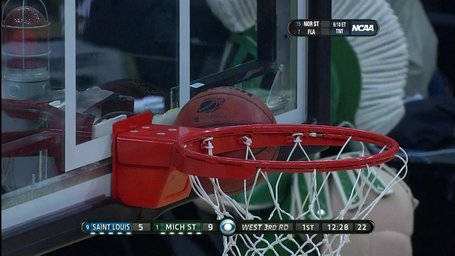 Here we see another shot that didn't really hit where it was supposed to and instead got jammed in between the rim and the backboard. Note: It isn't easy to get the ball stuck under the rim -- that takes true talent ... or the help of Michigan State's defense, I guess.

Anyway, let's move on and look at some more three-point attempts. Remember that clip from above that showed the short-armed three-point shot attempt? Well the Billickens are pretty smart cats (or whatever a Billiken is) and decided to adjust so that didn't happen again.

Unfortunately that happened. And then, not learning from their earlier mistakes, this happened:

At least their band looks cool: 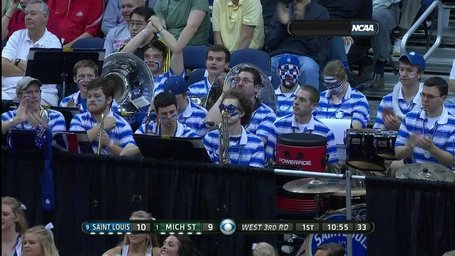 Their painted faces and subdued clapping make it clear they're thinking the same thing noted Billiken fan Bill Hanstock is thinking: We Billiken-lieve.