It's since been deleted, but Indiana basketball coach Tom Crean sent out a tweet Friday afternoon, which read: "I am doing great. I have been thinking about you alot since last weekend. A whole lot. How are you doing?"

Crean quickly apologized and said that the tweet was meant to be a private message sent to a new recruit. 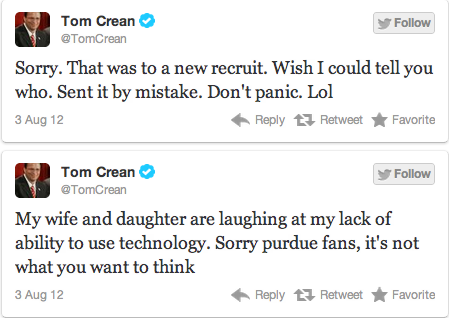 If this was actually a message to a teenage boy, then Crean did nothing wrong ... legally. College coaches are allowed to send direct messages to recruits on Twitter, but cannot interact with them publicly (gross).

The real issue is whether or not Crean's explanation is bogus.

Now I don't know anyone who talks to a friend, acquaintance, prospective employee, etc. like that. "I am doing great. I have been thinking about you alot since last weekend. A whole lot. How are you doing?" also doesn't read like a message sent to a wife, significant other or anyone else Crean would be especially familiar with.

Basically, Tom Crean either got caught cyber flirting with someone or he is the creepiest recruiter of all-time. Honestly, I hope it's the former.