A Reminder Of Home: Jim Calhoun, And Why He'll Be Missed

As Jim Calhoun retires, a Connecticut native looks back at his legacy in the state and why UConn fans will miss him so.

Share All sharing options for: A Reminder Of Home: Jim Calhoun, And Why He'll Be Missed

I grew up in Connecticut in the '90s. If you want to know what Connecticut was like in the '90s, go there now. One of the state's nicknames is "The Land of Steady Habits" (we need new marketing people) and that holds true. This resistance to change is perhaps best exemplified by Bradley International Airport, the shabbily gray-carpeted entry to the state that can only call itself international because of the occasional flight to Toronto. Whenever I'd fly home I'd always see an ad for a local bank on my way from the USAir gates to baggage claim that was essentially a giant picture of Jim Calhoun. For years, he was my reminder that I was back home. Now, according to reports, he's stepping down after almost 30 years as UConn's head basketball coach.

There are those who will celebrate this news as the elimination of another bad guy in college basketball. Calhoun has received plenty of criticism of late for his handling of the Nate Miles scandal, his "nawt a dime back" tirade and his leaving a team on the cusp of a postseason ban that could cripple the program. But as someone who grew up with this team, I'll miss him.

Jim Calhoun took over a basketball program that had only been to the Elite Eight once in 47 years and won three titles there. No other modern coach built up a national program out of so little. It's not like UConn is located in a great college town - the joke is that they call it Storrs because they finally have a second one. It has trouble attracting the best in-state students as well, which means that it is not afforded the same reverence by the state that the University of Michigan or even the University of Kentucky receives. And tiny Connecticut is not an ideal recruiting base.

Calhoun's 1996 Big East championship team had no state natives, and the player who played high school basketball closest to Storrs was South Carolina's Ray Allen. Yet, in spite of all of this, Jim Calhoun managed to turn UConn into a national power over his 26-season career in Storrs. 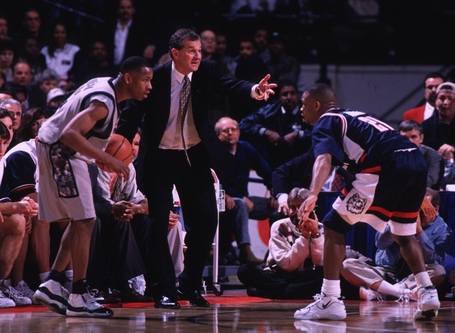 For the longest time, Calhoun could do no wrong in my eyes. I was 5 when his 1990 squad that was unranked in the preseason came within a Christian Laettner backbreaker of making the Final Four for the first time. The next nine years were marked by a frustrating inability to make it beyond the Elite Eight. Sweet-shooting Ray Allen arrived in 1993 and from then on we expected the team to finally get over the hump every year.

But in 1994 Donyell Marshall missed some key free throws and the Huskies lost to Florida in the Sweet 16; if they won they would have a faced 9-seed Boston College team that they swept during the regular season.

In 1996 UConn was the one-seed coming off a stirring Big East Tournament victory but it lost to Mississippi State after the Bulldogs bullied Allen into a terrible shooting night.

When the 1999 NCAA Tournament came around most Huskies fans were shellshocked into thinking that the team would lose again. And barely two years earlier our beloved Whalers had decamped for North Carolina, so state fandom was in a bit of a rut. But the 1999 team had a cold-blooded points machine in Rip Hamilton and a pudgy freshman point guard named Khalid El-Amin who drove the team past Gonzaga into the Final Four. The team beat Scoonie Penn's Ohio State Buckeyes in the national semifinals during my sister's bat mitzvah ceremony (my parents brought a portable TV so my alumni uncle and I could watch the game in a hallway). After the game, drunk relatives asked me if I thought UConn could win and I told them I was honestly just glad to be there.

But Jim Calhoun wasn't glad to be there. His team was a 9.5 underdog in spite of its 33-2 record, so perhaps we shouldn't have been so surprised they were game for a fight. Duke had Trajan Langdon, but Ricky Moore's lockdown defense forced him into a key turnover to end the game. UConn had 10 fouls to use on Elton Brand in the form of Jake Voskuhl and Souleymane Wane (though they only needed 7). Khalid El-Amin helped hold William Avery to a 3-12 night. And Rip Hamilton was omnipresent, running Duke defenders ragged to the tune of 27 points. UConn was the biggest underdog to ever win an NCAA Title, not just in point spread, but in where the school had come from in the span of a decade. 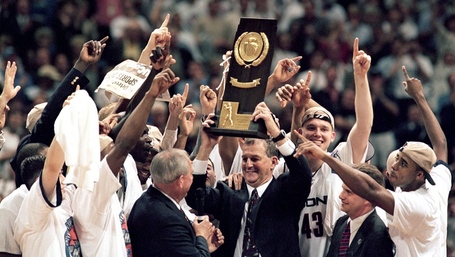 Jim Calhoun was an underdog too. He was playing baseball in high school when he was called out of the game so he could be told that his father had just dropped dead of a heart attack. He took odd jobs as a grave digger and working in a shampoo factory to support his family and eventually attend college. He started coaching at Northeastern, taking the team from Division II to Division I and feuding with BU's Rick Pitino over the same shrinking pool of players to recruit.

Then he took over a moribund UConn program whose main selling points were getting to play national powers like Georgetown and St. John's. Nothing ever came easy for the guy, so he never let up. And when he won the state a national title only two years after the Whalers left he was elevated into that Bear Bryant/Adolph Rupp stratum of college coaches who won college championships in states without a pro team. It made him the face of the state; the guy who greeted you when you came to the airport. We knew he could be tough (his hero was Bob Knight, not Dean Smith) but we saw him as curmudgeonly and not cruel. In 2006 he endorsed Democrat Joe Courtney the week before the election and Courtney ended up beating incumbent Rep. Rob Simmons by 83 votes. I'll go to my grave believing that Calhoun made Courtney a congressman.

Calhoun won two more titles, never taking his foot off the gas. He had gotten to the top by fighting, and he'd stay at the top by fighting. But a national title can change a coach from an underdog to a bully even when the coach himself doesn't change. Calhoun won two more titles at UConn, but now the Huskies were the bad guy, throttling Georgia Tech in 2004 and Butler in 2011. The 2006 team that lost to George Mason was the Goliath to a David, and the team itself was surly and marred by Calhoun's first major scandal; only suspending Marcus Williams for half a season after he stole a laptop when the same offense netted A.J. Price a yearlong suspension. His 2009 team had to go to Detroit for the Final Four to face a Michigan State team that was the poster child for laid off autoworkers. Calhoun had just told a reporter that he wouldn't give any salary back to help close the state budget deficit. UConn was the bully again and they lost. Somehow, Jim Calhoun became the bad guy even though he was the same as he was in 1986.

And with all of that he lost some support in the state. I haven't seen any reliable polls on his popularity but my PBS liberal parents certainly didn't like his tirade, and his years of indifference toward the state's media horde made him seem more crank than curmudgeon. Now that he's retiring I'm kind of relieved that he didn't hold on for too long, even though I wish he could stay for one last year to help see the school through its sanctions.

I left the state in 2002 with no intention of coming back. All that it had to offer me was a yearly Barenaked Ladies concert and a liquor store that didn't card. And I didn't want to go to UConn because the last thing I wanted was four more years of high school (at least 30 people from my grade went there).

But my UConn fandom was stickier. That's because I loved the Huskies as a child, and when you love a team as a child it's hard to let it go because you don't care that they didn't love you back. And people from small places need something to brag about when they move to the big city. My fellow Connecticut expats and I can go on about Tate George's miracle, Ray Allen's circus shot in the Big East Tournament and Kemba Walker's ankle-breaker against PItt. UConn is ours, and by connection Jim Calhoun is ours. I'll always have to forgive Jim Calhoun, even when he's at his worst.

I was back in Connecticut a few weeks ago and now that most of my 20s are behind me it didn't seem like such a bad place. Sure there are no bars but it's pretty and sensibly priced. It's a perfectly fine place to raise a family. But it's not an easy place to live until you've hit the complacency of middle age. When you're a restless kid you need something to keep you entertained when you're living out in the sticks. So I'll always owe Jim Calhoun for building the UConn Huskies into a pillar of my childhood, a totem of my state. He'll always be an ad on my way to baggage claim, a reminder of home. 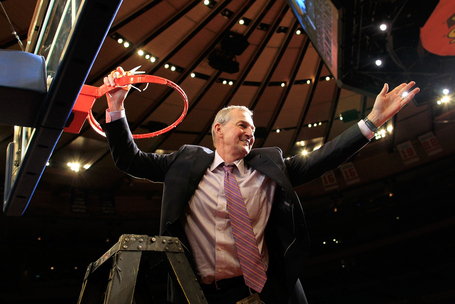