Don't have a horse in the race during Saturday's games? You do now, because Spencer Hall is here to help you decide which teams to root for in Week 5.

Quarterbacks aren't generally likable, but the ones that throw INTs have a certain joie de vivre to them.

Take Jacory Harris and his 31 flavors of pickishness. He'll throw them long. He'll throw them short. He'll loft a shot duck into the arms of a shocked defensive linemen after a hit, but he's also capable of the really artful deep ball thrown into the teeth of a safety, too. The inspiration comes with the next series, because no matter how many picks Jacory Harris throws he winds up for the next one like he's about to throw three TDs on the next single pass. Fifteen black roulette spins in a row? I'LL TAKE RED DEALER AND MAKE IT SNAPPY. It'd make me put my face through a sheet of glass slowly if I were a Miami fan, but the luxury of distance changes your flouncy nightmare of a turnover machine into my noon shift entertainment, Canes fans. 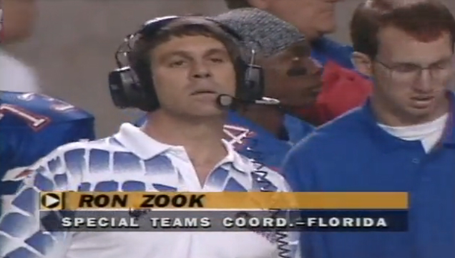 The 1990s were a special time for all of us. Fat pants. Seinfeld jokes. Tamagotchi. Using Football gear with unspeakable patterns, like the blue gator scale golf shirts seen here. Ron Zook was indeed once a young man with a Lloyd Christmas butt cut hairdo and a demotion to special teams coordinator, headbutting players when they came off the field and leaping around like a toddler who'd gotten into a bag of candy. Look at the sheen of youth on the man! The come hither sultriness about the eyes, the cocky tilt of his posture. That's a man about to take life by the udders and make himself some smooth, silky success-butter. 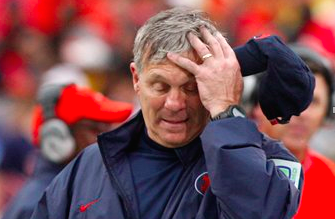 Lean: Illinois. (Out of sympathy.) (Because they gonna die.)

Russell Wilson is now the official most underrated quarterback in the nation, meaning soon everyone and Mark May will begin telling you this. We cannot have you behind the curve, football hipsters: you liked Russell Wilson so much better in his neglected work in 2008 and 2009, back when it was alt to like him and the lamestreamers hadn't discovered him yet. I mean, it's cool if you want to like him, but NC State is getting mentioned on ESPN and stuff. You need to get on the newness like Florida International or North Dakota State*. They're pretty obscure, you probably haven't heard of them.

*Liking an FCS team over an FBS team is the most football-alt thing you can do.

Michigan State fan: It would take an icy cold bastard to look at Michigan State in this game and pick against them. Mark Dantonio could have died after the Notre Dame game, and will return to coach from the booth. How can you look up in that booth with half a heart, reader, and not see the devotion of a man willing to risk life and limb to exhort his football team toward victory? How could you doubt that kind of dedication, and not reward it with your cheers and enthusiasm?

Wisconsin: We lead the nation in per capita alcohol, cheese, and sausage consumption. Heart attacks are called "Twice on Wednesday," dude.

Did you know they fried things at this game? Why, the Texas State Fair will fry just about anything!

Ah, you haven't lived until you've tried bits of flaky, delicious fried cat in the hot Texas sun. Texas lost to UCLA last week, so underdog points are awarded their way out of a mix of pity and admiration, since losing to a quarterback who only passed for 27 yards constitutes some kind of achievement in the field of "WTF Studies," and that kind of research and scholarship has to count for something.
Lean: Texas.

LSU will employ all-universe corner Patrick Peterson in a Wildcat-style formation called "The Thundercat," thus all but admitting that their only hope of scoring points in any fashion at all this year depends on playing Patrick Peterson at all eleven positions on offense at once. Additionally, Les Miles used the word "scotoma" yesterday in a sentence correctly, and you're going to need some paper towels to clean your freshly exploded head off the wall behind you now.  Tennessee is meanwhile coming off a thrilling double overtime win against UAB. No, that doesn't mean anything good for them at all in this game, but it's kind of you to ask.
Lean: LSU

Georgia is 1-3 and headed for Folsom Field, where Colorado aims for zero trash generated by having volunteers and students pluck half-eaten hot dogs from the trash.  There's a lot of metaphor there for how Colorado football has been under Dan Hawkins: a generally good idea whose execution turned out to be a lot less pleasant than one could have expected. And while we're extending the metaphor, the half-eaten hot dog of the Mark Richt Era is in need of some reheating or ketchup or something, because 1-3 headed to high altitude is scrounging through the trash by anyone's standards, much less Georgia's. AJ Green is back after a four game suspension for selling a jersey to a potential sports agent, so there's at least that much hope to go along with Boulder's cuddly, non-intimidating environment.
Lean: Georgia.

One of my hobbies is making up random overtime rules. 34th overtime: backflips by spry linemen determine winner. 58th overtime: coaches run 40 yard dashes to determine victor. The 83rd overtime, though, is a really special one since it involves the mascots fighting it out to the death to see who wins. If this game comes to the rare 83rd overtime, place not bets: the Duck and Tree are among college football's most savage and anarchistic mascots, and cannot be handicapped properly since both have dealt out asswhoopin' in the past decade or so to lesser, more pacifist mascots. And now we're rooting for the 83rd overtime just to see this happen. (If they sneak Harbaugh into Tree, however, then slam the mortgage down on Tree. Jim Harbaugh fears no man.)
Lean: Stanford

Never fear: the Florida fan whose trash-talking video has inspired a Facebook group dedicated to kicking his ass should he appear in Tuscaloosa will most likely not make the trip due to the minor detail of his probation. The internet: it's an amazing place that college football fans use to dig up the worst imaginable information on each other. This fight between two aristocrats can't evince much in the way of underdog sympathies, but if you're looking for an objective lean Alabama is the returning national champion, meaning if you're one of those flesh-colored robots who roots for whichever team is currently holding a trophy, you'll pull for Alabama.
This is not to imply that those pulling for Alabama on Saturday have no souls. That would be gently and indirectly suggesting this through a series of deft rhetorical steps. I'll just come out and say it: you have no souls, and I don't want you rooting for my precious football heroes anyway, person-bots.
Lean: Florida (Blatantly homerish here)