College Football Rootability Index, Week 8: The Cult Of Les Does Not Want Understanding

In this week's Rootability Index, we point out which college football team is best preparing for the apocalypse, reiterate our support of the Cult of Les, and identify the Tibetan Buddhist master most similar to Nick Saban.

Share All sharing options for: College Football Rootability Index, Week 8: The Cult Of Les Does Not Want Understanding

You have to resort to food tangents to care about the Big East in any serious fashion as an outsider, but you will watch it unless you and grandpa want to watch CSI: New York on television tonight. Network television! Helping old people fall asleep and stave off the fear of impending death for over 20 years. When funeral planning and robot insurance become the number one advertisers on the Big Four, we'll all nod and remember who called it first.

Tampa's got superb food, but if BJ Daniels were to throw you a tasty Cuban sandwich from across the room there's no chance it's getting to your hands before it gets intercepted by a hungry DB. The chance of getting the good Habanero cuisine, even if it's stolen before you can taste it, still trumps the guaranteed bowl of Cincinnati chili with spaghetti in it. You people are sick. SICK WE TELL YOU.

Ride the curve of football hipsterdom, and embrace the Ricky Dobbs for Heisman campaign since you don't really care about the Heisman anyway, and because Dobbs' for Heisman is ironic on like a thousand levels. (Option quarterback from academies who won't ever have the numbers or talent to compete on the national stage? Zero chance of winning? Clearly the perfect football hipster pick.)

I mean, you could pull for Cam Newton, but if you're a real football hipster you'll remind everyone that you liked him a lot better when when was still underground at Florida, and not so lamestream. As for this game, you must by definition root for Navy because they are our brave fighting men, and because they run the triple option, and because of Notre Dame's disproportional influence in the BCS. Remember: we hate the BCS, and have no alternatives, but really hate the BCS! This message brought to you by the BCS Know-Nothings Club of America: "We don't know what we like, but we know for sure we don't like you."

Iowa State, you are so close to getting the endorsement. You're already "plucky," that code word for "hopelessly overmatched at every turn but really, really trying." You're involved in a rivalry game called "Farmageddon" with Kansas State. You have to drive thirty minutes to get within striking distance of the middle of nowhere. I like to imagine that instead of Texas' huge Godzillatron, you just have an old black-and-white Magnavox propped up on the scoreboard. Don't tell me this isn't true, because I already recognize it and reject it for a funnier, more endearing reality for you, Iowa State.

Now if you just adopted the proper mascot-- 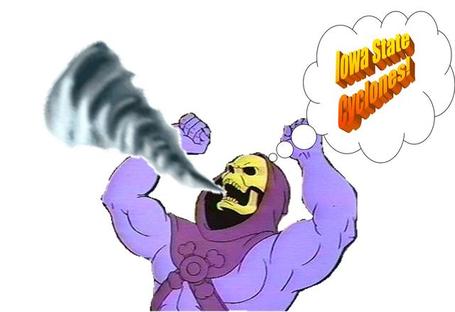 ---I'd be 100 percent on board. Until then, I'm afraid the bull-worshipping Texans get the nod for sheer rootability. This call has nothing to do with the young ladies in chaps on the sidelines. I am a liar, and I always tell the truth!

They talk on the phone sometimes, late at night. In Petrino's hand a tumbler of scotch; in Nutt's, a juice box.

Nutt: "So, have they left a dead deer on your doorstep."

Petrino: "Ah. Well, so the head is like a threat?"

Petrino: "Well, that explains the post-it note on it that says 'YOU'."

Nutt: "They're good people, Bobby. But don't ever start your own car after a loss, okay?"

Petrino: "Well, that is one way to cut players, isn't it?"

Nutt: "It's worked for Nick Saban for years."

Bret Bielema is single, making him something of a curiosity among college coaches. I always look for signs of bachelorhood surrounding him. Does his shirt look like it was just pulled fresh off the floor? Does he have a bit of beef jerky stuck in his teeth from his sensible gas station breakfast of Slim Jims and Red Bull? In the background of his appearances on ESPN does he have visible beer cans, pizza boxes, and wadded-up bar receipts?  Does he have a video game paused just off-screen, waiting to be re-engaged with three of his buddies sitting on the couch trying not to giggle during the interview? I don't know any of these for sure, though if he is coach at Wisconsin the beer is a given: it's just a matter of whether he has his own kegerator chilling in the kitchen or a supplemental fridge to hold a never-ending supply of fine American canned brew.

The entertainment alone is enough to pull for college football's Bachelor Frog. Add in the Wisconsin offensive line falling on Iowa's defensive line like beefy trees seventy times in a row, and the hilarity becomes irresistible.

I'm past trying to explain the Cult of Les. This is the picture that accompanied Yahoo!'s story about the improbably undefeated LSU Tigers. 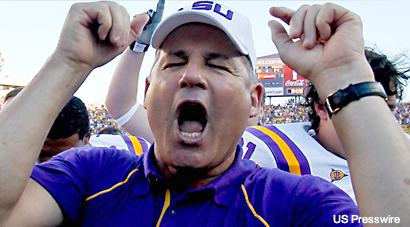 You either feel that, or you don't. There's no reason why Auburn shouldn't pave LSU: they have Cam Newton, who is like Tim Tebow but with the ability to read defenses. They're at home. They will have to confront their greatest weakness as a team--their defense--with the LSU offense, a unit that at their best appears to be playing a game of Pepper with the football without ever moving it further than four yards down the field at a time. Auburn should win this game.

They won't, though, and you'll have no idea how or why, because the Cult of Les asks no questions and offers only one solution: an improbable win, and a week's worth of stunned looks afterwards when you try to figure out how it all happened.

A real conundrum for the unaffiliated neutral, but the Rootability Index is here to help by pointing out that a pull for Oklahoma State is a pull for your future Post-Apocalyptic Nuclear Wasteland Overlord, T. Boone Pickens. Pickens is the number one bankroller of the Oklahoma State football program, and a megabooster unlike any other besides Phil Knight at Oregon. He's rich enough to shoot people as skeet if he chose to, and in fact does this on Thursdays. <----NOT FACTUALLY ACCURATE BUT TRUE IN SENTIMENT.

Anyway, he's buying up water rights in Texas. The plan is simple: when, in 10 years, or 50, or 100, the earth is ruled by mutant biker gangs, they're going to need water. And when they need it, the head of T. Boone Pickens--most likely speaking from a nourishing, life-supporting oxygenated fluid suspended in a bulletproof jar atop a robot body--will be the man with the water.

This started off as an indictment of Pickens, but now that we're thinking about it, that's pretty baller, T. Boone. Shine on, future wasteland overlord. I choose you in this matchup in order to suck up for future mercy at the hands of your mohawked biker henchmen.

This is being billed as a classic "student vs. the master" matchup, but let's just contextualize that for a minute. If Derek Dooley is the student, he's the very hardworking B student with neat handwriting, a great work ethic, and smart haircut. Unfortunately, the smartest thing about him might be the haircut, and in addition to that his resources are what a snobbish British novelist might describe as "limited despite his aristocracy."

Nick Saban, in contrast, is the Buddhist master Tilopa, who hit his student Naropa so hard in the head with a shoe that he knocked him out but somehow imparted enlightenment to his student through violence. He was also fond of regular-style beatings of his students, something only deepening the accuracy of this comparison, since you kind of feel like cattle prods would be part of the process if Nick Saban could only get these kids to stop whining about "human rights" and "burning skin."

This may be the most likable Mizzou team in recent history, even with the departure of dancing maniac Sean Witherspoon from the defense. The defense would be the reason for that, since for the first time in the Pinkel era the Tigers have something like a defense to go with the nutritionally responsible quarterback Blaine Gabbert. (Ribeye's a bit fatty, but otherwise the team nutritionist gives a big thumbs-up to your choices there.) Oklahoma is meanwhile number one in the BCS rankings, and if you really want to watch the world burn football-wise, there is only one truly honest lean for the anarchist no matter how inevitable the Sooner blowout of the Tigers on their home field may seem right now.

No matter what happens, no matter who deserts you in life, Jake Locker, you'll always have Todd McShay on your side. And possibly at your window, looking in and scouting you while you sleep. ("He comports himself on the pillow like a burly angel! His breaths are the exhalations of a champion! He just looks like a winner in pajamas or just sleeping in his boxer-briefs! Love, Todd. XOXOXOXOXO")

Arizona's Matt Scott will feel no such love from McShay, as he is making his first start for the Wildcats in relief of the injured Nick Foles, but he can run, and any time you have a running quarterback at home versus an often chaotically negligent defense like Washington's you have a recipe for some spectacularly blown assignments.  Washington knows exactly what they're going to do in this game, and that's ride Locker to the endzone. Arizona has no clue what they're going to do to score, and...well, that's going to be damn entertaining improv to watch.