Evil Contrarianism: Why LSU Is The Frontrunner For The National Championship

LSU is the favorite to win the National Championship in college football this year. We understand that sentence makes no sense, but WAIT -- allow Spencer Hall to explain ...

Share All sharing options for: Evil Contrarianism: Why LSU Is The Frontrunner For The National Championship

Luck and randomness control so much of your life it's terrifying. You shouldn't even be here: most of this reality is cold empty space, most people on the earth scratch out an existence on what you pay for a television, and the chances of any of those people getting together and successfully mating and creating you is so infinitesimally low you'd tremble with the kind of fear Kierkegaard would call fear if you knew how very small the chances of you being you really were.

Nevertheless, you exist, and you can't be too emo about the whole thing. In fact, a kind of brainlessness helps. Let's pass the mike to Gustave Flaubert for a minute.

To be stupid, selfish, and have good health are three requirements for happiness, though if stupidity is lacking, all is lost.

A little bit of stupidity is simply mandatory if one wants to be happy day to day, one has to get at least a degree of stupid on, and be a successful person. Stupidity is therefore like alcohol, right? If a little bit is good, a lot has to be even better, right? And won't leave you vomiting uncontrollably in an alley wishing you were dead? What? You say this reminds you of a certain college football team? And would serve as a delightful segue of sorts? 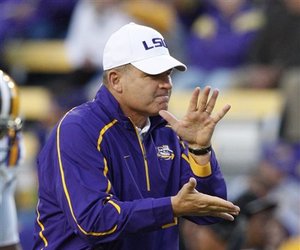 If Flaubert's even half-right about happiness, then you need to get on this bandwagon now, because we're running out of undefeated teams in college football and only one deserves your attention: The LSU Tigers, captained by the resident mercury poisoning king of college football, Les Miles, are this week's topic for Evil Contrarianism, where we take the indefensible and turn it into scientific truth. The following proves conclusively why LSU is a better candidate for the BCS Championship than any of the top six teams in the nation.

WHY LSU IS A BETTER NATIONAL CHAMPIONSHIP CONTENDER THAN ALABAMA: THEY'RE JUST LIKE YOU.

Just watch Alabama and stand in awe of their fearsome symmetries: their pinpoint precision with defensive assignments, their power run game coupled with an efficient and devious passing game, their locked-up special teams coverage. Alabama's pants are pressed to a fine crease, their hair styled to a fine edge, their ties knotted with a precision Germans would find intimidating. They write thank you notes with immaculate penmanship, and never forget their mother's birthdays.

This is not you, most likely. You forget things. You mismanage the clock, and often find yourself scrambling at the end of the day just to get the most basic assigned tasks done. You probably have a stain right now on your pants, and it's probably food, you disgusting pig of a person. You don't drive with your hands at ten and two on the wheel, and most likely sometimes hit the rumble stripes while looking at an interesting bird or shapely lady walking down the street. Honestly, sometimes you do it just because you're thinking about bacon or something. It's amazing you haven't killed anyone yet.

You're a lot closer as a person to being the LSU football team than you are to being the Alabama Crimson Tide, because admit it: sometimes, despite the bad snaps you've made in life, you're ahead of a lot of the plodding dullards who insist on showing up "on time" and "clean shaven" and "totally sober" to their required appointments in life. Sometimes that's been part of the fun, something you can only admit to yourself after you've run around with your hair on fire, broken several major rules of company accounting and best practices, and possibly stabbed a fellow employee in order to get done what you needed to get done to survive.

This is precisely how LSU wins football games. They beat West Virginia when Noel Devine suffered an injured toe and Patrick Peterson returned a punt for a TD. They beat Tennessee by having their slowish non-running running quarterback go for an 80-yard TD. They'll probably beat Florida by kicking a 70-yard field goal, punting for a safety, and scoring off a rugby scrum as the final whistle blows. Only one of those is possible by rule in college football, you say? Les Miles says you won't know until you try, son, and that's why he's making $3 million a year as football coach and you're sitting there reading about it.

You're practically a hunter-gatherer, man, and that's a lot more fun than plowing the boring furrows of Nick Saban's Process Farms. You're just like Les Miles, who may really not know where his next meal is coming from*, and whose football team isn't ever really sure they're going to score a point. Your aspirational self may lean Alabama, but you know at heart that you're just a fake field goal and an illegal substitution penalty away from victory at any point. Look deep into your soul: you know it to be true.

*Ha just kidding. He's lived out of the snack machine at LSU's football offices since 2005 off Zingers and peanuts alone. His doctor says he has the body of a 30-year-old. Les Miles is lucky in everything.

WHY LSU IS A BETTER NATIONAL TITLE CONTENDER THAN OHIO STATE: THEY ARE FRIENDS WITH MADNESS.

Ohio State is perhaps even more rigid than Alabama in terms of its offense, how they conduct business, and in their general approach to playing the game of football. Punting thrills Jim Tressel, which is why if you ever saw him at a blackjack table he'd pump his fist on every push. The run game leads the passing game, which is why Ohio State is happy to thump away for little yardage late into games no matter how many yards they game per carry. They have a schedule. Chains are supposed to creep along the sidelines along with their offense. Schedules are met.

This is all well and good until things don't run well, and then who do you need: a sweatervested and highly skilled football bureaucrat, or a lone cowboy whose white hat shines like a beacon of hope in a football desert? In a world gone sideways you need a sideways mind to survive, someone who doesn't flinch when their offensive coordinator throws passes when you need to run the clock out or when their defensive coordinator insists on a loose and perpetually ineffective zone coverage on third and long.

Such a mind belongs to one Les Miles, a man of such coaching talent he hires assistants who specifically will hinder his ability to win the game in order to prolong the contest, get into the fourth quarter, and then let hell loose on the field in the last four minutes of the game. You think stodgy Ohio State can put up with anything but a methodical, well-planned out game? Do you think they have the raw streak of berserker this LSU team seems to have for at least four or five minutes of a 60 minute football game?

Of course they don't. In a world on fire Les Miles is the man with asbestos skin, which is good for him because he doesn't really recognize fire as being something you shouldn't touch with your bare hand.

WHY LSU IS A BETTER NATIONAL TITLE CONTENDER THAN BOISE STATE OR TCU: THEIR RESUME IS PRETTY NICE, ACTUALLY.

They play actual teams, plus Boise and TCU try that dangerous "touchdown" play a lot. (Ewww.) You want to get tricky with Les Miles, Boise? He'll call trick plays that aren't even trick plays. His Statue of LIberty play involves one of his players actually wearing a Liberty Tax services Statue of Liberty costume. That's just how crafty his trick plays are. (It's also a paid advertisement for Liberty Tax services, which Les gets a pretty nice cut of after the game. Never. Stop. Hustlin'.)

WHY LSU IS A BETTER NATIONAL TITLE CONTENDER THAN OKLAHOMA: NO MESSY OFFENSE.

Hello actual football content; LSU currently has the nation's number 6th ranked defense, the number one corner in the nation in Patrick Peterson, an unbudgeable defensive tackle in Drake Nevis, and a budding pass-rusher in one Barkevious Mingo. And sure, LSU's offense is just south of Rice and Illinois in terms of total performance, but you know what happens when you score? YOU HAVE TO GIVE THE BALL BACK TO THE OTHER TEAM, GENIUS-PERSON. Nothing but bad things happen when you do that. Scoring touchdowns is downright dangerous when you look at it that way, meaning you should aim to hold the ball for as long as possible, punt, play defense, and then hope to win a football game that way. Think this sounds boring? It's what the entire NFL outside of the Colts and the New Orleans Saints try to do, and it's only the most popular sport in the United States, you commie terrorist waiting-to-happen.

WHY LSU IS A BETTER NATIONAL TITLE CONTENDER THAN OREGON: THEY WILL FRUSTRATE YOU UNTIL YOU KNOCK YOURSELF OUT WITH A BLUNT OBJECT.

The scene: Oregon versus LSU in the national title game. LSU has three losses, but still: they're in the title game because Les Miles has real, terrifying powers, and because LSU wins a 15.5 to -2 game against Florida in the SEC Title game in Atlanta. (See: "powers.") The ever-aggressive Chip Kelly watches in agony as LSU wins the toss and takes the ball. The Tigers move the ball exactly 3.4 yards a carry on every down, intentionally hold for penalty yardage, and succeed in running the clock out on the entire first half as the LSU offense scoots up and down the field like the twitchings of a slow needle on an voltage meter. Oregon has zero yards not because LSU was good, but because they have so mastered the art of frittering away clock without actually scoring any points. A last minute field goal attempt is squandered when Miles accidentally allows the clock to expire while the kick team is running onto the field.

The second half begins with LSU onsiding the ball and holding the ball for the entirety of the second half. This time LSU offensive coordinator Gary Crowton actually attempts to score, which results in the same endless possession game for LSU. Oregon has zero yards of offense; LSU has the equivalent of 800 if you count penalty yardage, yards lost to fumbles, called quarterback kneels, and other offensive atrocities. Chip Kelly is no longer coaching on the sideline as he has passed out after concussing himself with his own clipboard. Miles is watching and eating a Blizzard with his fingers on the opposite sideline.

The Tigers move in for the game-sealing field goal with eight seconds left. They ball is on the Oregon three yard line. With no timeouts, a hurried snap with one second on the clock is fumbled. The holder panics, looks at a wall of defenders, and reverts to his first love--volleyball--and pounds a thunderous serve with the football through the uprights. The referees award the Tigers one point for the spike*, and LSU wins the national title game as the first three-win national champion.

You know that as good as Oregon is, and as vastly superior as they are as a football team, this is therefore precisely how a game between these two would occur.

*These are Pac-10 refs. They're totally capable of this and you know it.