The TCU defense is a unique blend of confusion and pain, but the success of the Horned Frogs has been a long time in the making. Spencer Hall explains the bare minimum you need to know about the quirky defense of the team currently ranked No. 3 in the BCS Standings.

Share All sharing options for: TCU's Rise To BCS Power And Dominating Defense Somewhat Mythbusted For The Layperson

So, I just noticed a "TCU" at number three in the nation.

Should we do something about this? I'm not really sure this is a real university, school, or football team. Do we allow CFL teams to play?

You're clearly ignorant of Texas Christian's long and storied history in college football, stretching from college football's most famous proto-passer, Sammy Baugh, to their years in the SWC, and their recent climb from the WAC to Conference-USA to the Mountain West.

So I am. But please explain to me how this happened recently?

In short? A rebirth of the program beginning with Dennis Franchione's arrival from New Mexico in 1998, the year that TCU beat USC in the Sun Bowl. (Yessir, that USC. Most forget that pre-Pete Carroll they were the Pac-10's fallen aristocrats.) Franchione left in 2000 to accept the Alabama job, which he then left to accept the Texas A&M job, which he then left because he was politely asked to leave. This happens when things go very wrong, and you do not win games.Think of him as Dan Hawkins before Dan Hawkins was Dan Hawkins, only with a stronger sense of self-preservation, and without the Zen archery philosophy.

Yes, a defensive variant of the species, a successor who took the program over, made it better, and now is somewhere between establishing his school as a destination job in its own right or taking the next big job. Petersen is 57-4, which...okay, that's not really a fair comparison since Petersen's Boise teams have played an objectively easier schedule than a Mountain West slate, though that all changes when Boise joins the Mountain West next year.

Still, Patterson is 95-28 in 10 full seasons on the job (he technically took the job in December 2000), and has like Petersen taken the prior success of the program and expanded on it dramatically. Patterson accomplished this by building on defense first with a consistency found only in death, taxes, and the consistent quality of Five Guys bacon hamburger.* Since 2005, the lowest rank in total defense for the Horned Frogs has been 15th in the nation, and TCU has led the league in the category three years running. It's kind of their thing to crush bones, especially yours when you are the other team and have the ball.

Anything else notable about him, personally, before we get to the question of their defense?

Only that he plays guitar, and appears to have a nice singing voice.

So about that defense.

Yes, the defense. TCU runs Patterson's 4-2-5, a wrinkle from the usual 4-3 defenses one would see week in and week out in college football. To review: the 4-3 uses four down linemen and three linebackers, usually complemented by two cornerbacks on the edge and two safeties hanging back keeping everything in front of them.

The 4-2-5 likes to confuse opposing offenses by using just two linebackers and three safeties: a free safety, a strong safety, and a weakside safety. These three can be moved around into a dizzying series of variations pre-snap, the time when the offense is looking into the defense attempting to guess what the coverage will be. Without getting too technical, the effect can be one of complete disorientation for the quarterback unaccustomed to looking at the alignments.

A SIMULATION OF A QUARTERBACK LOOKING AT A NORMAL DEFENSE 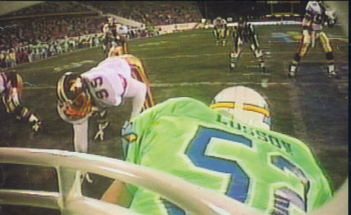 A SIMULATION OF A QUARTERBACK LOOKING AT A GARY PATTERSON DEFENSE AND HOW MUCH SENSE IT MAKES TO HIM.

If it makes no sense to you, you get the point. It's hard to read pre-snap, and often involves standard coverages presented in an unusual way, and often in the form of an eight-man front. Once a quarterback reads it, it might be conventional enough, sure. The quarterback usually has about 1.5 seconds to read it, or about half the time it took you to read this sentence. Very few quarterbacks at the pro level are that quick, and in college they're as rare as hen's teeth.

So pre-snap is difficult, but what about it after the snap makes it such a consistently good defense?

Because what starts as truth ends up as cliche but loses little of its intrinsic value, sir. Patterson's basic rules of defense all sound like football cliche, too.

The angles are good by design, and keep big plays from happening by funneling everything into the middle of the field. After you've walked a safety down the run game's production is threatened; after you've committed to the passing game, they alternately play tight coverage while blitzing you into oblivion off the edge, or worse still apply pressure with four while dropping into alternating coverages The "five spoke" secondary Patterson talks about is the three safety and two corner alignment, and as we mentioned earlier is a strength because of the difficulty of reading the different and uncommon variations Patterson's defenses throw at opponents.

The manual's all right there for you to see, and none of this is top secret. In fact, you can read it for yourself right here and right here. Once you get past the particular breakdowns of assignment versus formation, you'll see that it's relatively simple and can be simply taught by the right guitar-playing, visor-wearing taskmaster.

Is Mob Zero Cop the coolest name for a blitz in college football today?

So what of the personnel angle?

As stated in the "Why the 4-2-5" article above, the emphasis is going to be on speed. Patterson says himself that they recruit corners who can grow into safeties because he wants speed at every single position on the field on defense. A good example of this is TCU's safety Alex Ibiloye, a three-star recruit at corner who grew into a starting safety. Jurrell Thompson didn't switch positions, but was considered a bit short for safety at 5'11", and thus fell into Patterson's hands at TCU and became a key starter on this year's team.

Thompson is the exception to the three star talent you'll find on TCU's defensive side. TCU leans heavily on three-star talent in recruiting, and develops it into five star defenses the same way Boise does on offense: through scheme, through attentive player development, and with an eye for talent that is a step ahead of its competitors.

So how on earth do they remain so consistent?

Part of the stated purpose in adopting a 4-2-5 is adapting to change and turnover: without the same talent year in and year out, you have to scheme around attrition. This is the same theme you'll hear Nick Saban preach about his 3-4 scheme: it is a process, and it continues year in and year out regardless of the players. The 4-2-5 is designed to be taught quickly and simply, and to function not around the individual player, but instead around basic assumptions about defense: keep angles and leverage, set up spacing nicely, and then fly to the ball and keep your assignments. Learn them, execute them, and the system hums along nicely.

Is this where I get to ask if Dick Bumpas is a real name?

Yes, it is a real name, though you may feel free to sign in at a hotel under it if it makes you giggle. Patterson is the architect of the defense, but his assistants are owed credit for the consistency of the Horned Frog defense, as well. Defensive Coordinator Dick Bumpas has been there since 2004; safeties coach Chad Glasgow is in his tenth year with Patterson. There is a very strong correlation between staff continuity and winning teams in college football, and TCU has it on both sides of the ball. They teach their system very well, drill it to death, and earn their paychecks.

Does Dick Bumpas have a mustache?

You're damn right he does.

And Tank Carder? That's a real linebacker's name, too?

As real as his magic sternum, which is so magical he likes hitting teammates with it, too. 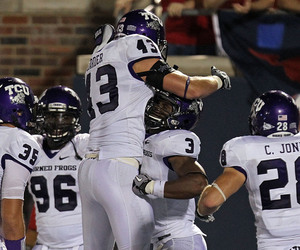 The net effect of this unusual but undoubtedly legitimate defensive scheme is what?

Pain. An abandonment of hope. Throwing gimme picks when the quarterback, thinking you've dropped into a Cover 2, throws a pick six into a Cover 5.  Centers blowing protection calls and watching as their quarterback takes a mouth full of shoulder pad as a mid-second quarter snack. Indecipherable coverages leading to the nation's number one pass coverage, so much so that cuneiform looks like speed-reading in comparison. Defensive players set in spacing so even an obsessive compulsive gives up and goes back to straightening your bookshelf. Losing a pass rusher like Jerry Hughes and chugging along without interruption. Sorrow. A lot of Froghorning. Getting embarrassed at home as Utah did on national television and watching your agony-drenched fans disrobe in the stands.

When you've driven people in Utah to public nudity, there's really not much else to say about how frustrating playing the TCU defense really is.