Helping you decide which teams to root for in Week 11 and familiarizing the dear reader with the universal rule of Joe Theismann-related distaste for Notre Dame along the way.

Northwestern was the site of Ricky Stanzi's injury last year. Ricky Stanzi is America. Therefore, Northwestern is Guadalcanal, and Iowa will remain dug in, will regroup, and will take this green purple hell you call Evanston and turn it into their field of glory not matter how eerily quiet you make the stadium, Northwestern fans, even if the Dan Persa Co-Prosperity Sphere has other ideas.

Skip the obvious vintage choice, since no one can be older than Joe Paterno and no one ever will be. Focus instead on Penn State QB Matt McGloin, the new starter who called out Kirk Herbstreit after winning the game for Penn State against Michigan with 250 yards and a TD. Joe Paterno things that scampish rapscallion has spunk and verve, and will make a fine spinning fullback one day. On the other hand, this is 2010, where throwing for 250 yards against Michigan must be given a special modifier to translate it to what a quarterback would do against "a defense not played by men in eyepatches who have severe cases of vertigo."

SITUATIONAL LEAN: OHIO STATE, AT LEAST UNTIL THEY TRY TO RUN THE CLOCK OUT WITH A 10 POINT LEAD, AND THEN FEEL FREE TO SWITCH TO PENN STATE.

Kansas State is the latest team to enjoy the rush of beating Texas, a narcotic whose power diminishes each time a team beats them. The comedown even off the weakened Longhorn-loss rush will still be bad, even as likable as the cromagnon attack of Kansas State is. (They passed four times last week. FOUR.)

Still, Blaine Gabbert is man of both sport and culture. Behold his culinary brilliance:

Grilled asparagus AND steak? We simply can't root against someone so young with such an appreciation for grill marks on his vegetables.

The neutral will want to instantly follow the Joe Theismann Rule of neutral fan alignment regarding Notre Dame and lean toward Utah.

REFERENCE: THE JOE THEISMANN RULE OF NEUTRAL FAN ALIGNMENT. We have a decades long disdain for Joe Theismann dating back to the 1980s, where reliable childhood sources reported both his general dickishness, and his fondness for prancing around in a Speedo at the pool. Remember that the only men who may wear speedos are Australians, citizens of East Asia, and Arnold Schwarzenegger in Commando. This was before he ever spoke a word in the broadcasting booth, which certainly hasn't helped.

This is a different Notre Dame team, however. This team works. This team has struggled. This team isn't very good, and no one's ever really thought it was very good. Utah, on the other hand, rode a cakewalk of a schedule to an inflated national ranking before a hideous embarrassment at home last week. In other words: they're exactly what you used to hate Notre Dame for being.

Oklahoma is like walking around naked: it's only good at home, and when you take it outside people tackle you and beat you into submission. The Sooners haven't won on the road this season, which would be a big deal for everyone if they weren't playing this game against Texas Tech at home. Meanwhile, Tommy Tuberville's Texas Tech team continues to juggle quarterbacks, struggles moving the ball, and now wins and loses most of their games by slim margins unfamiliar to the bewildered fans in Lubbock. In other words: all going according to Plan Team Auburn West.

The Las Vegas of games, since whatever happens here will likely remain here forever when it is vacated by the NCAA in the inevitable Cam Newton investigation. As of this writing Newton remains the likely quarterback, and if he's playing Georgia fans will probably being the vacating of the day anyway without the NCAA's say-so. The vacation of the day will begin at 10:00 a.m. with Bloody Marys, switch to beer sometime around 11:30 a.m., and will continue into the night with brown liquor applied liberally until all trace of the game disappears from the memory banks.

LEAN: AUBURN. (Let them enjoy it while they have it.)

As a Florida fan, it would behoove us to recuse ourselves from the picking here since there's no way we could prescribe a lean without---

/smashes any last shred of objectivity over head

We're confused about which team to pull for here, so we'll resort to our usual default in situations like this: head size, and it's not even close. 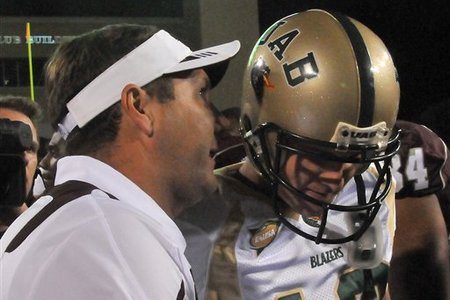 Mullen's head is almost as big as that kid's helmet is without him wearing a helmet. It's an asteroid of a skull, a titanic noggin whose visor could serve as a skirt for a smaller woman. That's astonishing cranial magnitude, and Saban can't possibly hope to compete here. Mississippi State didn't just shop for a coach by resume: they wanted a man whose skull was as disproportionately large as his mascot's, and by jove they found one.

LEAN: COACH MEGADOME AND THE BULLDOGS.

If the math seems awfully complex, don't get confused. It is very simple when you look at the ACC math determining who in the tangled mess of teams will emerge as champion. If Clemson beats Florida State and the price of kyat in Mogadishu falls to something below $3.45 a pound, then Maryland will become the champions if and only if the socialists hold a significant majority in Korean parliamentary elections, and then if and only if they win by no more than a field goal. HOWEVER: if Florida State wins, the heads of the four teams locked into a stalemate in the conference will be taken to an island fortress, given rudimentary weaponry, and ordered to fight their way off the island to an undisclosed location somewhere in the interior, where the Trial Of The Dyspeptic Python will determine their worth. You don't understand how the ACC works, and neither do we, so let's just root for something complex to happen and let John Swofford have a stroke over it, not us.

A train leaves Tempe at 3:05 p.m. heading west at 85 mph. Another train leaves Los Angeles at 65 mph at 4:15 p.m. The trains maintain constant speed. If the distance between the two cities is 375 miles, when do the two trains meet?