On Saturday, the football world was captivated by Wrigley Field's Northwestern-Illinois football game. It led us, of course, to wonder where else we might be able to set up hash marks. Pebble Beach? An aircraft carrier? The Roman Coliseum?

Share All sharing options for: Unusual Football Venues: After Wrigley Field, What's Next?

On Saturday, Northwestern and Illinois played football at baseball's Wrigley Field. Neither team was ranked, but the game drew national attention. Was the choice of venue a mere gimmick or a creative tribute to an historic stadium? I reckon that it was a little of both.

More to the point, it was fun. People love inventiveness, novelty, and intelligent use of spatial economics. It's the reason we still use the word "neat" to describe certain things, decades after the word "cool" usurped its previous definition in our lexicon. For example, remember the Tiny House? We don't describe it as "cool" or "awesome." We simply say, "neat!"

My generation is one that grew up with Legos and SimCity, further exacerbating our interest in how we can and do use space. In SimCity, once our cities grew large enough, we bulldozed the commercial zone near the water to build a stadium. Now we are grown, and we do this in the real world -- consider Pittsburgh's Heinz Field and PNC Park, or San Francisco's AT&T Park.

When the Chicago Bears played in Wrigley Field up until 1970, they did so out of necessity. On Saturday, Northwestern and Illinois played there because it would be neat, and it was neat, and some of us were inspired to wonder where else an American football game could be played. Here, then, are some potential venues, as well as some other locales that seem like a neat idea until we think about it for 1.5 seconds.

Venues that could work out

View Football at Fenway Park in a larger map

Football has been played at Fenway before, so it fits. But just barely. The confines are even more cramped than Wrigleys, as one of the end zones backs up flush against the wall. There would almost be enough space for it to run through left field, but even if there were enough space, placing goalposts at the Green Monster end would be problematic. I guess they'd just paint them on?

Injury risks: falling into seats in first base area, impaling one's self on the Pesky Pole

View Football at Churchill Downs in a larger map

The Downs, which sits just down the street from Louisville's football stadium, is a pretty enormous place. During the Kentucky Derby, it can accommodate 150,000 people, more than just about any other American sporting venue.

Injury risks: getting intoxicated, getting bludgeoned with a tent pole by someone who is intoxicated, inadvertent euthanasia, decapitation by fancy hat, being in Louisville's south end for longer than 15 minutes, being directed to run 45 consecutive quarterback sneaks by your coach, who is intoxicated

This hole is flatter than a lot of fairways out there. The golf world, though, is a hotbed of tradition and purism, so the powers that be would probably require you to follow course rules. Cheering is only permissible while the ball is in the air, throwing/fumbling the ball into a hazard is punishable by a one-down penalty, and teams must keep their own scores.

View Football at Bank of America Stadium in a larger map

I've stumbled across a somewhat unbelievable coincidence: in terms of dimensions, seating, and just about everything else, Bank of America Stadium is perfectly suited for football, almost as though it were designed with such a purpose in mind. NFL football could certainly be played here.

Injury risks: every consequence that comes along with the decision to enter the state of North Carolina to begin with; there may be scheduling conflicts as signage in building suggests that this building is leased by the Panthers, who are almost certainly an MLS team

View Untitled in a larger map

I feel confident in stating that this is one of the only vehicles in the world suitable for a football game. Confines are very, very tight, but it should just barely fit. (Side note: Michigan State and North Carolina have discussed the possibility of playing a basketball game on an aircraft carrier.)

There is not enough room for two sideline areas, so one or both teams would probably have to set up shop behind their end zones. One unfortunate consequence of this is that one or more plays may be inadvertently called by Tony Siragusa.

View Football in Big Chicken Island in a larger map

Fortuitously enough, this island is almost the perfect size and shape for football. And unlike many islands, this one does not have any trees.

Big Chicken Island sits in the middle of Lake Erie, just barely in Canadian territory. As such, CFL rules may have to apply. Kicking the ball into the ocean is worth a point. It's the ultimate neutral site, as there is practically zero room outside of the field for anyone to stand.

Injury risks: panic attack and subsequent depression after the football, on which you painted a face, drifts into the ocean and out of reach, being shot by fugitives and/or rum-runners who have not received word that Prohibition has been repealed

Venues that would almost certainly not work out

Why it wouldn't work: in the late 1980s, L.A. was home to Bo Jackson. Everyone, including you, agrees that Bo Jackson is the best and most awesome football player of all time. In 1991, Jackson suffered a career-ending hip injury, and understandably, the city's football fans couldn't really deal with it. The NFL fans of Los Angeles either renounced their fanhood or moved elsewhere, and within five years of Jackson's career-ending injury, both of the city's NFL franchises had skipped town.

Football fans have not returned since, rendering Los Angeles a concrete labyrinth wandered by 15 million people who have never truly appreciated the beauty of a third-down blitz or an onside kick. Logistically speaking, a game could be played here, but I'm afraid that it would not be appreciated. Leave them to their palm trees and traffic.

Why it would be nice: I think we can all agree that it would be in good taste to pay homage to the cooking apparatus that inspired football's colloquial nickname.

Why it wouldn't work: It's not big enough. If it were big enough, players would always be falling through the slots. Since we're taking the trouble, though, let's strike this down for good measure: supposing football players could be transformed into miniature people with the magical ability to avoid slipping between the grids, well... the thing about gridirons is that people often cook things on them, so they're really hot. Oh my creepy God, you really want your favorite team to play football on such a hazardous surface?

Why it would be nice: It's basically the oldest thing ever [citation needed].

Why it wouldn't work: The structure is known as Titus' Folly, and one of the few structural gaffes built by the Roman Empire at its height. Embarrassingly enough, the architects miscalculated the Coliseum's dimensions, and it wasn't until the building was completely finished that they realized it was completely unsuitable for a football game. It was at this point that arena football was conceptualized, but ultimately marginalized in Roman culture because it was "weird."

Why it would be nice: Ha, yes, I get the joke, it is quite funny.

Why it wouldn't work: Many a joke has been made about Ryan's girth, but may we please be realistic for a moment? Ryan does have a relatively large midsection, but it isn't nearly large enough to host a football game. His belly would need to be 360 feet wide and 160 feet tall. Not possible, and if it were, not polite.

The loft in my apartment 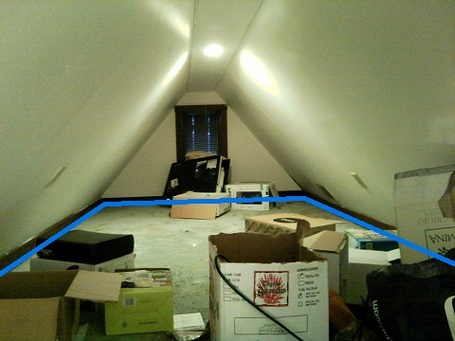 Why it would be nice: Football teams are always on the lookout for interesting venues, and I think my loft is pretty interesting. For reasons unknown, there are eight power outlets up here. What was the intent? Was this meant to be a bedroom? When I first moved into this place, I considered making this my bedroom, because my bed would fit. The thing is, there's already a room that works perfectly as a bedroom, so that would just be kind of stupid.

I have absolutely no use for this extra space, and it'd be really nice to find some sort of purpose for it. I'm honestly kind of embarrassed by how much of a dang mess it is right now -- I just sort of threw a bunch of boxes up here after I was finished moving -- but it really wouldn't be much of a problem for me to clean it up.

Best of all, I would play host to a college or NFL football game in my own apartment! How neat would that be?

Why it wouldn't work: This morning I was puttering around up here, and the hard facts dawned on me. Even if I moved all the boxes and stuff out of here, there still just isn't enough space. Proportionally it works, but dimensionally it does not. The ceiling isn't tall enough either. Oh well. I guess I won't be hosting the hit television program Trading Spaces anytime soon, huh?

Oh... I see. You're making a mockery of this discussion. You know as well as I do that a regulation football game cannot be played in outer space. There are at least a dozen reasons why this is not possible, but rather than list them, I'll simply end this discussion with egg all over my face. All I wanted to do was think of some neat new places to play football. No need to make me feel bad.