Rootability Index for Rivalry Week matches you with the rivalry interests that suit you, and also brings you a special message from T. Boone Pickens regarding the air you breathe and how he owns it.

Rootability Index this week chooses 10 of the most root-friendly rivalry games, and instructs you, the uninvested neutral fan on the couch for the holiday weekend, which one to pull for with irrational and limitless passion.

Texas A&M at Texas. Are you weird? Genuinely and truly strange? Like most things in life, reversing your answer will yield the truth. If you said, "Yes, my am I weird!!, then you probably say "My, this is spicy!" when something has an iota of garlic in it. You probably are the people who buy Trey Songz records. You are the people who watch Two and a Half Men. You are normal, and therefore conditioned to say you are not.

If you said "No, I'm not strange at all," you did this from your bathtub office, the tub of baked beans you regularly telecommute from while talking to your pet coatimundi and painting tiny faces on pistachio shells. When asked what your favorite flavor is, you say "burning." Your favorite beverage is air, and you only watch movies in Claymation because "it's the most realistic form of cinema." You consider all this normal, because you are very, very weird.

So if you consider yourselves normal--which you're not--then you should root for the very strange Aggies, the football team that put its best wideout at quarterback with spectacularly positive results and has a fanbase whose rituals are just a few degrees removed from North Korean stadium rituals. If you're so "crazy" you put ketchup on your eggs sometimes, then you root for the Texas Longhorns, who are terrible but just as weird* as you are, you crazy person!

THE BACKYARD BRAWL: West Virginia at Pitt. The rivalry game most likely to involve a death by pickaxe or a fatal beating with a hot pressed sandwich where fries are considered an acceptable "topping," the Backyard Brawl really won't mean anything in the grand scheme of things as long as UConn finishes out the rest of their schedule against Cincinnati and South Florida properly. They won't, of course, because this this the Big East, so the game could still have real live conference value. Pending that, you'll just have to satiate yourself with the genuine hatred these two teams feel towards each other, most especially on the West Virginia side for Pitt ruining the 2007 season for the Mountaineers by effectively knocking them out of the national title game with a 13-9 Panthers victory. For maximum chaos, root for West Virginia. <----This is usually a good rule in any situation, but especially so here.

The Spankmaster Saban says your decision is made for you by your uncontrollable urges, and by the inevitable nonexistence of this game in the record books for Auburn.

CAPPUCINOS VERSUS CORN: Colorado at Nebraska. This rivalry, once central to the fates of actual national college football and the Big 12, has slumped to somewhere below Bedlam and somewhere just above Farmageddon (Kansas State v. Iowa State) in terms of hate-wattage. Translated, that means "not good," since Nebraska is just emerging from the depths of the Callahan era while Colorado is a functionally headless team after the firing of Dan Hawkins earlier this month. Oddly, cutting the head off Zombie Colorado only made them stronger. The Buffaloes have won two in a row without Hawkins as head coach, proving that motivational tactics and Zen philosophy are no substitute for having nothing to lose.

If this game ends in a tie in regulation, have the Pelini brothers and Ralphie face off at the fifty in a headbutting contest. Final prediction: one dead Pelini, one live Pelini, one dead Buffalo.

TINAAAAAHHH. Boise State at Nevada. FACT: Colin Kaepernick, maestro of Nevada's Pistol Offense, looks like an ostrich when he runs. FACT: the representative film of Idaho is Napoleon Dynamite. FACT: You sort of hate this movie for becoming a favorite of dumb people, too, since it's so good even they recognized the quality. FACT: It's a movie of deep secret knowledge. FACT: Tina the Ostrich is owned by an Idahoan. FACT: IDAHOANS HAVE A NATURAL DOMINANCE OVER OSTRICHES AND OTHER LARGE FLIGHTLESS BIRDS INCLUDING EMUS. Fact: Boise will beat Nevada at home in Reno thanks to their defense and Idaho's innate ability to control ostriches.

THE COMMONWEALTH CUP: Virginia at Virginia Tech. Virginia, at one point this year, thought the Punk Janitor Horse of Sadness was a good idea. 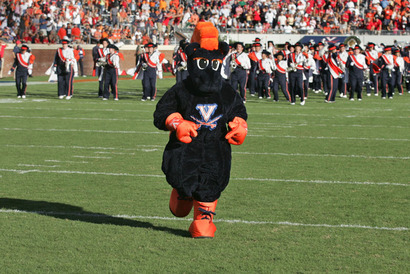 You can apologize by taking him off the field, 'Hoos, but you'll never take him away from our nightmares.

LEAN: Virginia Tech. At least until we stop seeing him in our worst dreams.

Michigan at Ohio State. Gordon Gee might have sealed the Rootability Lean for us this morning by refusing to come out and say "We don't like sharing money" in regards to BCS schools and their opposition to seeing Boise or TCU in the title game, but there's other, more quixotic reasons to like Michigan. They're doomed. Their defensive coordinator has gone barking mad. Their head coach may be coaching his final game. Their quarterback has accounted for 66% of their total yardage in a record-setting season where he still can't keep pace with the bleeding incompetence of his defense. Their fanbase is now just openly admitting they're in a huge Ionesco play, and will watch this game in the stands wearing rhinoceros masks. Fortunately for Michigan, Rootability just adores absurdist theater.

THE SERIOUSLY WE KILLED PEOPLE OVER THIS CUP: Mizzou at Kansas.  There is no hope whatsoever of Kansas winning this game. None. This note is here to remind you, dear reader, that this is the only rivalry involving people actually killing each other in great numbers as a reference point for taunting, since Mizzou fans actually did make a t-shirt in 2007 referencing Quantrill's Raid into Lawrence, KS, where the future Confederate general rode into town, burned a good portion of the city down, and killed 150 people. 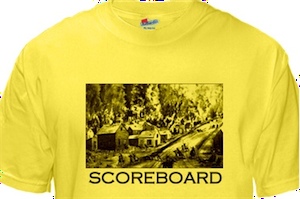 BEDLAM: Oklahoma at Oklahoma State. THE FOLLOWING IS A SPONSORED MESSAGE FROM T. BOONE PICKENS. 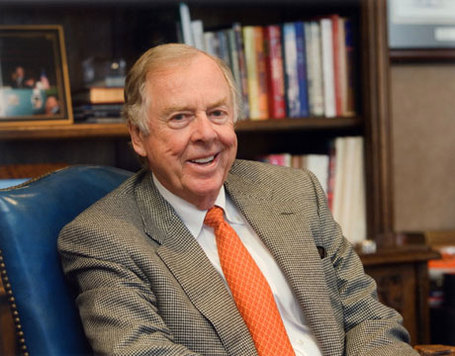 Hello, I'm T. Boone Pickens. As a supporter of Oklahoma State football, I'm naturally biased. Of course I want you to pull for my Oklahoma State Cowboys. After all, we've got a dynamic offense, anchored by the national leader in receiving yards Justin Blackmon. We've got an improved defense. We've got one of the brightest young coaches in the country, Mike Gundy. Shucks, we've got the best gameday experience in the country, but that's just me talking. You'll have to come see for yourself sometime and visit Stillwater! It's just a great place to be.

I'd also like to remind you that I just bought the air rights to your city, and will begin processing and selling the oxygen you breathe at a nominal fee to you and your family.

Which city, you ask?

Wouldn't want to have to cut off oxygen, even at a marginal rate, if Oklahoma somehow beat my Cowboys, now would I? No one wants that to happen, most especially me.

I hope you're hearing this, Bob Stoops.