Randy Shannon Fired: Who Will Replace Him At Miami?

Share All sharing options for: Randy Shannon Fired: Who Will Replace Him At Miami?

With Randy Shannon out at Miami, the attention turns to the coaching search. Athletic director Kirby Hocutt clearly wants to make a splash while finding a coach to return the Hurricanes to glory. Who will the next head coach be? Time to take some guesses.

Mike Leach: The pirate wants to get back into coaching, and has said as much, but still has to overcome the stigma attached to his name. With a lawsuit against ESPN pending, Leach is trying to clear his name while lobbying for another shot at a head coaching job. Luther Campbell already took to Twitter to give Leach a ringing endorsement, so he's got that going for him.

Mark Richt: The Georgia head coach hit a rough patch this season and currently sits at 6-6. As a former Miami quarterback, Richt has ties to the university already. The honeymoon is over in Athens and Miami could provide an easy escape route for Richt following a disappointing season.

Gus Malzahn: The offensive coordinator at Auburn has plenty of buzz surrounding his name and is a prime offensive coordinator turned head coach candidate. If there is fire to go along with the smoke surrounding the Cam Newton investigation, the time may be right for Malzahn to make the jump. Even if there's no fire, a head coaching job at a storied program like Miami would be tough to turn down.

Chris Petersen: Another year, another round of coaching rumors for the Boise State head coach. Petersen's name always seems to come up as a candidate for any major opening, so why not Miami. The Broncos seem destined to be a big fish in a small pond, even with the impending move to the MWC. If Peterson is looking for a step up in competition, Miami would be it.

There is one final head coaching candidate. Mere minutes after Shannon's firing was announced, an industrious Twitter user put Photoshop to work in an effort to lobby for an unlikely candidate. 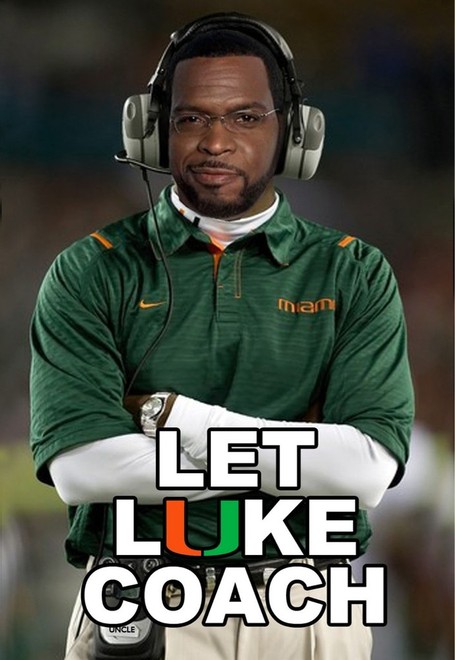