The Oregon Ducks' Offense Somewhat Mythbusted For The Layperson

Share All sharing options for: The Oregon Ducks' Offense Somewhat Mythbusted For The Layperson

Oregon has been the source of much analysis lately, much of it bad. Here is a short list of things that have been misunderstood and misunderstood very badly about the Oregon offense.

"Wow they run a crazy unconventional offense OMG!" If someone says this, then they're the kind of person floored by the perpetual resurrection of the McRib and the endless ingenuity of Chili's and the same five appetizers they've been serving you for over two decades in different permutations.

No one singular part of the Chip Kelly offense is unique. The hurry-up came from Sam Wyche's Cincinnati offenses of the late 1980s. The shotgun run game is one of the oldest formations and concepts in football.The passing concepts are basic, white bread staples of any cromag NFL or college playbook. Any and all option elements have been SOP since Rich Rodriguez popularized the zone read.*

*Here's one thing Gregg Easterbrook got badly wrong in his piece: the influence of the pistol. Anyone who watched the Oregon/USC game would have seen very little pistol formation involved, and with good reason: the Ducks barely run it relative to the rest of their run formations. Rather than a cornerstone of the Chip Kelly offense, it's simply another wrinkle, albeit a shiny, easily spotted one like the Pistol. If you want a Pac-10 offense that relies heavily on it, go watch UCLA. On second hand, don't, and just go watch Nevada's, since they're a true functioning Pistol offense, and UCLA's is more like a Derringer With A Hacking Cough in comparison.

Point being, no one part of the offense is that kooky or walleyed when seen in individual components. It's when it hums down the field in four plays and 56 seconds that it seems like some new beast, but in reality it's like many "new" offenses in design, an amalgam of troublesome offensive parts sewn into a seamless and intimidating new monster.

"That's just one of them fancy West Coast finesse offenses." This point is very stupid, but that doesn't mean it won't be made by the fanbases and aligned pundits of whomever Oregon faces in the BCS title game. (This also assumes a lot, but for simulation's sake go with me here.) The assumption that this is an offense relying exclusively on sleight-of-hand, misdirection, and cagey play-calling to con clueless, bamboozled defenses out of yardage.

Please note all the bodies on the ground in this video dissecting Oregon's run game.

You do not get the leading rusher in the country, LaMichael James, three yards into the defensive backfield on every play with finesse. You get it there with four upperclassmen on the line and an offensive line coach, Steve Greatwood, who clearly understands exactly what the zone blocking scheme in Kelly's offense requires in every situation and who can teach it clearly, effectively, and consistently no matter who is in the lineup. Oregon's blocking is not only about interior blocking, either. The wide receivers must be savage blockers in their own right, something you'll see countless times in any footage of the Ducks' offense in full rage mode. Good blocking is nothing finesse-y or newfangled, and never will be.

"Man, they go fast!" This is a misconception only in degree, since "fast" doesn't quantitatively cover it. The Ducks do in fact run 35% faster through their plays than other teams, and rank at the bottom of the national standings in terms of of time of possession, a stat which is for this team effectively meaningless. Perhaps the improved phrase should be "The Ducks take fast, slap a black market Mexican nitrous system on it, buy a JATO pack and strap it to the top of their offense, and then point the whole thing facing downhill on an icy mountain road in January. Going fast has obvious advantages: wearing out the defense, maximizing the number of plays, and placing pressure on the defense and the defensive coaching staff to process information.

"That's one complicated system they have there, but they make it work!" Hogwash. Start with the playcards, for instance. 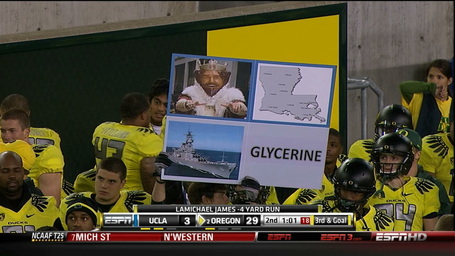 Complex? Not really, though it's certainly amusing dada jibberish if you're looking at it without knowing that the signs are crafted to be the sort of dumb-smart absurdity that sticks in the heads of 18-22 year olds. The coaching staff admits as much regarding both the play cards, and even the terminology they use to determine snap counts.

"The code word for going on two might be, you know, "Mickelson,’’ because he always comes in second – stuff like that,’’ Asper said, referring to the golfer currently near the top of the Masters leaderboard. "So if the quarterback says Mickelson, it means we’re going on two. It’s usually funny, to help you remember it.’’

One of the reasons the West Coast Offense as practiced in the NFL has never succeeded at the college level in a large way is its complexity. You deal with limited practice hours as a college coach, teaching systems to kids who do attend class and who lack the football study skills of adult professionals. The West Coast Offense doesn't deal with that too well, and if you don't believe it just ask Nebraska fans who have not forcibly blocked the Bill Callahan era from their memory banks*

*Don't even mention Callahan's defenses. If you do, ask a bystander for a wallet, because the Nebraska fan is about to seize, and might bite off their tongue in the process..

The Kelly Offense and its concepts are simple, and can be taught in a very short amount of time. This is a hallmark of many successful college offenses, including Norm Chow's attack that broke every passing record imaginable at BYU and USC. Chow once said he could teach his entire passing game in a day. The same is true of Chip Kelly's offense: it's easily taught, but difficult to master.

"If it's so simple, then why is it so hard to defend?" Three-part answer, ho!

1. The concepts are simple, and simply deadly. Hey, we get the whole line running left. The option run then goes right. Look, you think this is a screen. Funny, we just threw down the seam of your defense for a huge gain. There's opportunity for misdirection on almost every play, but the reads are simple enough to present two options: take the misdirection, or simply run the play the misdirection is based on. The number of simple LaMichael James keepers this year is enough to prove this point: more often than not, the fear of misdirection has allowed Oregon to simply smash teams up the middle. (Please go back to the point about Oregon's line here: they are the reason this offense moves, not fancy design or deception.)

Simplicity improves processing speed, meaning that placing this offense in the hands of extremely talented players at Oregon is akin to running the state's favorite Apple IIe video game, Oregon Trail, on a massive supercomputer. In further similarity, both games usually end with the player dead from the runs. (For defensive coordinators, the system is a kind of dysentery of yardage lost and eventual death.) Simple is fast is death in yellow neon leggings, and when run perfectly they are very hard to defend.

2. It is executed perfectly by good players. Okay, not perfectly. Chip Kelly will never see perfection, but Oregon learns their system quickly and then spends the rest of the time working it down to a bare nub of perfected offensive poison for defenses to ingest. To finish the theme of the piece: this is about doing something fundamentally sound in a precise, highly effective, and endlessly reproducible way. The attack may be sexy, but the Six Sigma theory and assembly line production behind it are anything but alluring when seen in practice.

3. Chip Kelly, taskmaster. It's not that they go fast, it's that they go fast well under a taskmaster of a coach who moves as quickly and as precisely as his team does. The concepts of this scheme are all over the place, but few have tied them together as well as Kelly. He has an offensive coordinator, but make no mistake: this is his attack, his design, and most importantly his play-calling and emphasis on detail and execution. Phil Knight doesn't write checks to a playbook. He writes them to Kelly, and if the coach continues to coach this way he'll be writing them for a long while.