TCU Vs. Utah: Why This Game Matters For The BCS Standings, And Beyond

The TCU Horned Frogs play the Utah Utes this weekend in a game of national import. We will explain to you what matters about this game, what doesn't, and what strategic and personnel-related matters you may point out to your fellow game-watchers. Do this, and earn the admiration of ladies, the respect of fellow footballing men, and smiles from pleased football-savvy infants.

Share All sharing options for: TCU Vs. Utah: Why This Game Matters For The BCS Standings, And Beyond

So we're watching a Mountain West game, yes? You certainly are, and a deadly important one at that in terms of the conference picture--which you by percentages likely do not care about--and in the national picture, which you most certainly do.

TCU enters the game ranked third in the BCS standings with three games remaining. Though fleshy human voters have let their emotions cloud their judgment and have Boise over the Horned Frogs, their allies in the Robot-American community have rallied to TCU's side, and could likely stay there if TCU wins out and if their quality wins on the schedule remain high quality wins. If this scenario frightens you, you should blame formerly awful Baylor, the 7-2 team TCU claims as a quality win on its schedule, for their surprising schedule strength.

Noooo! I don't want to blame Baylor. They have adorable bears!

I didn't say you had to do that, though I do remind you that bears are remorseless killing machines, and that those two cubs are thinking of nothing but slaughtering everyone in the room for their meat and delicious blood.

Bears have to eat too. Let's agree to disagree, and go back to TCU.

Though San Diego State has suddenly remembered how to play football, Utah remains the biggest chance to impress the human portion of the vote remaining, and certainly the most public. But what about me not having the Mountain Network, the tiny sports channel the Mountain West designed just to keep its teams from ever being on meaningful television ever?

Not a problem this weekend: CBS College Sports will take a marketing tip from your neighborhood crack dealer and offer all Time Warner and Dish Network customers a free day of CBS College Sports Channel, a day that happens to feature this game.

So I may tell my local columnist what a lazy, non-DVR-literate person he or she is if they claim that this wasn't on television?

So this seems to be quite important for TCU. What is Utah playing for?

You know that long string of Presidential succession scenarios where, if enough people die in office, Big Ten Commissioner Jim Delany becomes acting President? Utah needs something that unlikely to happen to get them in a BCS bowl even if they go undefeated. Any and all discussion of a national title will be dismissed as infinitesimally small unless the entire SEC, Pac-10, and Boise are declared ineligible.

Jeff Blake works fast. He might be able to do that.

He might, but until then the computers hate Utah. This is a symptom of their schedule. Just as Baylor's success buoyed TCU's strength of schedule, the mediocrity of Pitt, Notre Dame, and BYU seasons do not find favor in the eyes of the machines. I will point out the obvious here that the computers are just faulty and machinistic representations of their flawed human masters, and in some cases make no sense whatsoever.

You're talking about the Billingsley Report, right?

Noooo, not at all okay yes. Some cases = The Billingsley Report, the computer formula put together by a man with a weak grasp on algebra and who most definitely doesn't have a fondness for cheap inhalants, especially Lemon Pledge huffed through a fine chamois.

So what can they do?

Given multiple Oregon losses, another Alabama loss, a pair of Auburn losses, and a loss by Boise State, Utah could emerge unscathed from the regular season, point at the ACC and Big East as it's fond of doing, and then jerk its head and get a BCS bid. If these things don't happen, an undefeated Utah team could be headed for the Maaco Bowl Las Vegas if an at-large bid is not offered. (And if Boise is out there, it will go to Boise, the team who has become a steady TV draw in its recent history as America's favorite BCS insurgent.) This is a nightmare scenario, but it is within the realm of possibility.

Yes. Utah could pull off the truly rare feat of being an FBS school with two undefeated seasons in a decade with both resulting in something other than a national title.

There should be some kind of award or recognition for this.

It's the internet. There is.

So who may we cite as people of great importance?

The TCU defense in total. The unit is first in the nation in scoring defense and allows 8.67 points a game. The Horned Frogs play brutal team defense, particularly against the pass, where they aim to blanket receivers and render passing lanes inoperable, and don't seem to care too much about interceptions. They seem to prefer knocking teeth loose first, and if a ball or two comes loose for them, well, that's nice, too. By the numbers this obviously works well enough for them. Watch for defensive end Wayne Daniels on the pass rush, and for linebacker Tanner Brock to play the part of human Roomba at the linebacker spot as the team leader in tackles.

And what of this TCU QB Andy Dalton?

The Ginger Avenger* is fun to watch, since TCU runs a version of the spread relying heavily on punishing inside runs, something Dalton is called to do from time to time in an attack featuring Dalton and backs Ed Wesley and Matthew Tucker. He's not a bad passer, either, though he is prone to making two plays a game that leave you wondering if he's suffering a stroke out on the field. As the nickname implies, he's got red hair, and not "auburn" red, but like "surface of the sun" red. How he survived playing in hot Texas sunlight without becoming a talking freckle is a testament to sunscreen and his toughness.

*Trademarked, but you have our permission to use it only for the purposes of impressing your company. 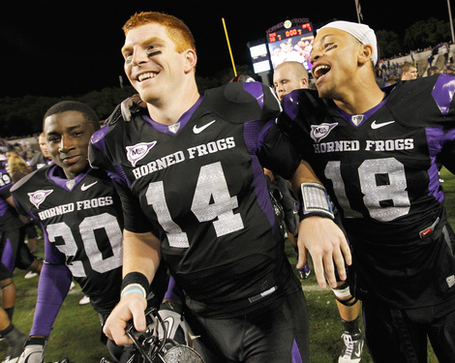 Neither has anyone else since they've been holed up on The Mountain. He's doing fine as a passer, with a 13/6 TD/INT ratio, a developing awareness of how to function in Utah's offense, and a far greater comfort level than you saw last year in Utah's 55-28 loss to TCU in Ft. Worth. That loss, by the way, was Wynn's first start on the road as a freshman QB. "Surprise! You're dead" won't be the theme this time around for Wynn and Utah at home.

We're guessing you'd be right. Utah has the sixth ranked scoring defense in the country, and while their third-ranked scoring offense is a nice match, it's deceptive given the competition on their weak schedule. Utah has two clear advantages: homefield, and punt returner Shaky Smithson, the nation's leader in that category. He's also named "Shaky," the kind of fantastic nickname we would have killed for as a middle schooler.

So you're guessing TCU wins, yes?

Certainly, but not quickly, and not in an overwhelming fashion. This feels very much like a 27-13 game, with few points scored in the first half as the two offenses take turns attempting to find any daylight whatsoever in the opposing defense.