UTEP's not going down in the 2010 New Mexico Bowl without a fight, it seems! (Albeit a very small fight.) BYU mercifully eases back on the blitz coverage, and Donald Buckram and Trevor Vittatoe engineer a two-minute touchdown drive ending with a 49-yard Vittatoe bomb to Kris Adams.

Jake Heaps is retired with just under 10 minutes to play, having broken the New Mexico Bowl record for passing. His replacement, James Lark, is intercepted on his second pass of the day. Then Vittatoe gets interceted back, and this thing is somehow even more over than it was before. 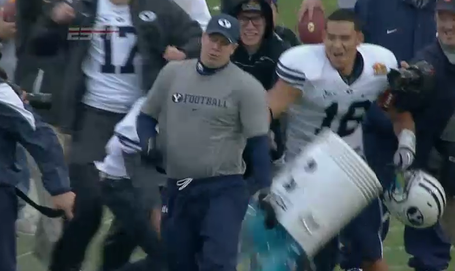 Bronco Mendenhall gets Gatorade down the back of his pants trying to dodge his victory bath, and that'll do it for our brief stay in Albuquerque. Special shoutout to Vittatoe, UTEP's all-time leading passer, who tore every ligament in his ankle in mid-October against UAB, and who still hasn't missed a game for the Miners. He's undergoing surgery Monday morning, and he should've had a better sendoff.