The third quarter of the 2010 Beef 'O' Brady's Bowl passes largely without incident. A 29-yard field goal attempt on Southern Miss' opening drive of the half is blocked. Louisville executes another pair of ruthlessly efficient three-and-outs. Key Golden Eagles receiver Quentin Pierce suffers a left leg injury late in the period and has to be helped from the field. Larry Fedora pulls a fake punt out of his hat (sorry) that sustains what will be the last drive of the quarter, notable chiefly because Southern Miss is fielding the girthiest punter we've ever seen in major college football.

And then the fourth quarter begins. On the first play following the swapping of endzones, Austin Davis hits Zeke Walters with an eight-yard touchdown pass ... and the attendant catch is a thing of beauty: 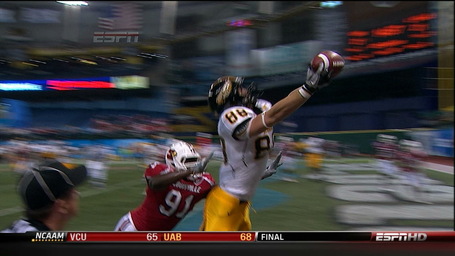 Any partisan joy is short-lived, as Jeremy Wright returns the answering kickoff for a Louisville score. With 14:40 remaining in the game, the Cardinals and Golden Eagles are tied, 28-28.

Join the discussion with Louisville fans in our live game thread.