The greatest college football stories in 2010 were about titans falling and rising. None stood taller than Auburn's Cam Newton.

The pundit class gets to spout truisms about college football like "It's another wacky year!" and "Every week matters!" because there is typically enough anecdotal evidence to barely support those truisms every year. This year was "wacky" because blue-bloods like Texas and Florida declined while Auburn, the SEC's red-headed stepchild, and Oregon, the future in football form, ran the table. Boise State and Virginia Tech got to prove that every week matters, sort of, but especially if the undefeated team loses late and isn't in a BCS automatic qualifier conference. And USC proved that no Camelot is untouchable.

But before we get into the top five college football stories of 2010, a brief apology to the honorable mentions: Andrew Luck, the best player not to win a Heisman since Vince Young; Les Miles and LSU doing the voodoo that they do; the Big East and ACC taking mediocrity to new and more painful places; Texas and Florida being bad after being really good and then really overrated; New Mexico coach Mike Locksley somehow still having a job; Washington's Jake Locker proving that hype is worth nothing, as ever; Rutgers' Eric LeGrand, this year's cautionary tragedy; Army heading to a bowl game for the first time in more than a decade; Alabama winning a national championship in January; and everything else I forgot that you can remind me of in the comments.

And now, the countdown. 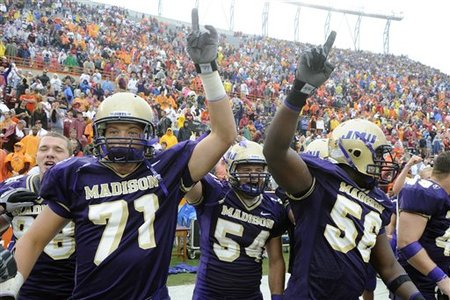 Yeah, the Hokies were coming off a loss that effectively ended their BCS National Championship Game hopes before they ever got a win. But James Madison came to Blacksburg and shut down Virginia Tech, winning a 21-16 rock fight despite trailing 16-7 late in the third quarter, attempting just eight passes, and gaining 235 total yards. Bigger than Appalachian State over Michigan? Nah. But it's probably the biggest win in the Dukes' history, and it was a rare highlight in an injury-scuttled 6-5 season for them. The Hokies got redemption in the form of 11 straight wins and an ACC title, but they'll remember their loss to James Madison forever. 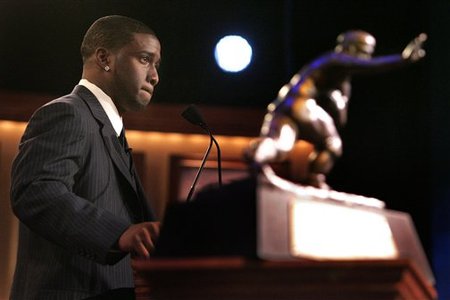 The long and sordid saga of what Reggie Bush did or did not do while at Southern Cal concluded (or at least climaxed) this June, when the NCAA finished its investigation and handed down punishments that included a two-year postseason ban, scholarship penalties, and the vacation of wins from the 2004 season, when USC won its BCS National Championship. Incredibly, Lane Kiffin has managed to keep the Trojans from staying in the ashes — a down Pac-10 helped — but the revelations about the not-so-squeaky-clean program Pete Carroll was running managed to not surprise anyone and produce NCAA penalties that shocked everyone. Flags fly forever, and memories can't be vacated, but with the USC tale nearly over, the question lingers: was it worth it?

The Broncos, everyone's favorite and least favorite BCS interloper and media fixture, had it all going for them late in the season: their path to an undefeated season was clear, TCU's stumbles had opened up a route to a Rose Bowl berth, and if either Auburn or Oregon faltered, Boise State could play for a national championship. Then Kyle Brotzman missed, and then he did it again, and Boise State lost to Nevada, 34-31, in one of the season's most exciting games. It snapped a Boise State winning streak that dated back to 2007, made Brotzman a momentary fallen star, and briefly gave Nevada the shine that coach Chris Ault and quarterback Colin Kaepernick haven't gotten for years, but the Broncos' loss is probably most important for the money it cost the WAC, reminding fans that college football is a business first, last, and always.

When LaMichael James broke this run against Tennessee, it seemed like Oregon's offense might just have enough to make the Ducks a national title contender in 2010. Little did we know, the Ducks had more than enough, and more than anyone else: the Oregon offense became a sensation, with Chip Kelly's "blur" attack getting explained by our own Spencer Hall and written up by the New York Times Magazine. The Ducks soared to an unbeaten regular season and a BCS National Championship Game date against Auburn, and averaged 49.3 points per game.

The one person who mattered more than any other in college football in 2010? Unequivocally, it's Cam Newton. He was the season's best narrative, completing a compelling arc from the Florida transfer who could have been Tim Tebow's heir to making the most of a second chance at Auburn. He was college football's best player, putting together a historically great statistical onslaught, winning the Heisman Trophy, and leading the Tigers to the top of the BCS rankings and the BCS National Championship Game. He was college football's biggest scandal, as his recruitment became the subject of an NCAA investigation. And he authored the season's best play, that weaving run against LSU, crystallizing in seconds the most important truth of the 2010 college football season: it belonged to Cam Newton.