This is a picture of Jeff Anderson's laptop. It's open to a Microsoft Excel spreadsheet. It may look just like the computer you are on right now! So who's Jeff Anderson? 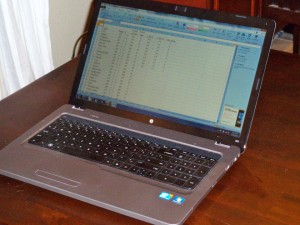 Jeff Anderson is one half of "Anderson & Hester" ... which is one of the six BCS computer rankings.

If you assumed that the BCS used a collection of super computers that sit in an all-white, dust-free room and calculate Will Hunting-like formulas, Playbook's report (Game of Numbers: How the BCS Rules College Football), will change your thinking -- did you know that at least three of the six computers use Excel, C++ and Fortran -- a programming language created in the 1950s -- to churn out the BCS rankings?

Wes Colley runs his calculations in a database from his home in Alabama. Jeff Sagarin works from his home in southern Indiana, using Fortran, a once popular program used by old-school mathematicians.

Peter Wolfe compiles his rankings baked in C++. Anderson and Hester use a complex spreadsheet and an ordinary HP laptop in Southern California. "When we started, it took Excel half an hour to calculate the rankings," Anderson says. "Now it takes a fraction of second."

From there, a quick double-check of the math is in order before releasing the latest BCS rankings to the public.

Once all six providers compile their rankings, they're submitted to Big East associate commissioner John Paquette, who doubles as the BCS' "communications guru." Rankings are also sent to executive director Hancock, the National Football Foundation and four of Paquette's counterparts from other conferences. "All of us compile the information independently," Paquette tells Wired.com. "Then we compare the results to make sure we all agree, after which the National Football Foundation issues a news release."

Perhaps most telling of the BCS as a whole, though, on numerous levels, was this section with executive director Bill Hancock.

Despite its cultural impact, the BCS is tiny. It staffs just three people: Hancock and two part-time office assistants. And it's headquartered out of the director's suburban Kansas City home. "I don't give out my address," he says with a laugh, "because I don't want someone egging my house."