During the broadcast of Saturday's Virginia Tech-Boston College game, some attention was given to Virginia Tech's lunch pail. This, apparently, is the idea:

Every day [defensive tackle John Graves] walks off the practice field he carries a lunch pail, an honor bestowed on him by the defensive coaching staff, acknowledging his status as the unquestioned chief of the Hokies' defense.

Problem: it is not a pail at all! 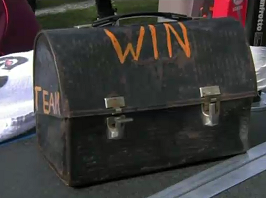 Of all the inane trinkets that are lugged around by college football teams (pretty sure it's all just crap they took out of my grandpa's basement; only a matter of time before some FCS rivalry bowl uses his vintage collectible can of Billy Beer as a trophy), this might be the most mailed-in. First, though, to address what a pail is and isn't:

I know that if you look up "lunch pail" on Google images, you will see pictures of lunch boxes. Pails are buckets that may or may not have a handle. I will argue this point for hours and hours and I will win, if not by logic, then by attrition.

Now to address this lunch box that they are calling a pail. Why is it an honor to carry around? How does dragging around a lunch box signify leadership or authority?

As if this weren't underwhelming enough, someone has taken the liberty of painting the words "WIN" and "TEAM" on it. If a lunch box did not helpfully remind them, would the Hokies forget that they are a team and that they are expected to win?

Look, if they would make noon games more worthy of attention, we wouldn't have to talk about things like this.