A weekly examination of the lesser luminaries of Division I-A. On this week's agenda: Boise State cheers and fears Nevada, Houston survives without Case Keenum, and all three service academies have better records than Notre Dame. Ya heard.

Share All sharing options for: Mid-Manifest Destiny: Boise State And Nevada Are Each Other's Biggest Fans

• Buck up, Broncs. Boise State's actual win over Oregon State didn't earn too many style points on its own merits, but BAWWWWW LOOKIT THIS GUY: 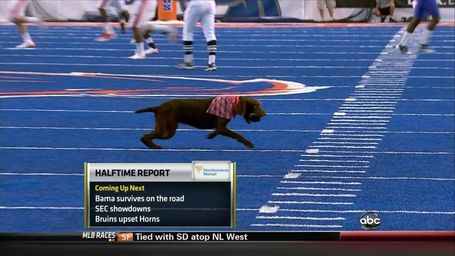 Maybe, just maybe there's more to charming a nation of voters than just the scoreboard.

Boise's done gracing your television sets for the moment; their WAC slate kicks off this weekend with a road trip to New Mexico State. They're also in the curious position of having to cheer very hard for the only rival still standing in their way: Nevada. The Wolf Pack is gracing the national polls for the first time in over 50 years, and as such are the Broncos' last best hope for a high-profile matchup late in the season to remind the polls why they loved them in the first place. (As long as they win.)

• Depleted stable. Boise State will go forward for one game without defender Winston Venable, suspended for a helmet-to-helmet hit on James Rodgers during the Oregon State game. Worse, they'll be without the services of running back D.J. Harper for the rest of the year thanks to a treacherous ACL. Harper, the team's No. 2 backfield threat, had 160 rushing yards and 144 receiving over the Broncos' three games. This is his second consecutive season-ending knee injury.

• Still hopping, for now. TCU found putting SMU away to be more difficult than many anticipated, allowing the Mustangs' Zach Line to barrel over their ballyhooed defense for 139 yards. The Horned Frogs remain top-five poll material, but Andy Dalton's Heisman campaign probably took the biggest hit: The Ginger Avenger threw for "just" 174 yards and two picks, which qualifies as an off day for him.

• 'Pack masters. BYU at 1-3? Really? We're baffled, but fine with Nevada being the ones dropping them below .500. They did manage to hold Colin Kaepernick to 278 all-purpose yards, which really is a dip, but his last pass moved him to 8,000 career aerial yards, right on the dot. (He's on pace to throw for over 3,000 this year; safe to say that with Case Keenum gone, we've found our new pinball wizard.)

• Backing up Broadway. Terrance Broadway, the freshman thrust into action after the demise of Case Keenum and Cotton Turner, threw for 174 yards but was sacked five times by Tulane. Tulane. If the Cougars want to finish the season with any quarterbacks at all, they'll need to rely more on a rushing attack. Two backs who combined for over 100 carries in 2009 were slated to return, but with Charles Sims ineligible for the season, the better share of work will fall to Bryce Beall. (Who scored four touchdowns against Tulane, so we suppose he's up to it.)

Keenum, by the way, sounds like he still hasn't decided quite what to do with himself:

Keenum will undergo knee surgery on Wednesday, and he’s putting off any decisions about his future beyond that. He hasn’t ruled out trying to play one more season with the Cougars by asking the NCAA for a medical exemption. Or, he could turn his sights to next year’s NFL draft.

"No matter which way I go, I’m going to push to get healthy as quickly as I can," he said. "It really doesn’t matter where I’m playing. That’s not really the pressing issue right now. The pressing issue is getting healthy."

• He's still got two limbs. Bernard Pierce, Temple's backfield cannonball, followed up an early-season hand injury with an ankle sprain against Penn State in the third quarter, which may very well have swung that disappointing outcome of the Owls' first 2010 loss. He's currently listed as a game-time decision for Temple's Saturday stand against Army.

• The numbers love us. Four teams (Boise State, TCU, Utah, and Nevada) are in the Top 25 for Week 5 in the AP, Coaches, and BlogPoll rankings. (The BlogPoll, for the record, devalues Boise State just a tiny bit over mainstream media voters but ranks Nevada four spots higher than either traditional poll at No. 21.)

• Plug it in, baby / Where you been, baby? Meet one of SB Nation's newest editions, Bull Run, covering Buffalo. Love them, read them.

• Toledo, who delivered a solid knockout to a little-known outfit called "Purdue," thanks to the Boilermakers turning the ball over three times and allowing Austin Dantin to complete 24 of 31 passes for 209 yards and run for 64 more.

• Northern Illinois takes home second prize this week, because by now we're all aware that beating up on Minnesota can be done by just about anybody.

• Florida International, who didn't have a good day, but who we swear is going to beat the pants off one of these Big Six teams they're so insistent on playing, just any day now. (Spoiler! It's going to be Pitt!)

• Army, who beat an honest-to-Sutekh major program (well, Duke), and did it by a healthy two-touchdown margin.

Not ready for primetime.

• UAB, who by all rights should've beaten a hilariously depleted Tennessee team, but lost in double overtime.

• Central Florida, who couldn't stop a 14-point fourth-quarter comeback by Kansas State after holding them to a mere field goal the entire rest of the game.

• Fresno State, who got completely wrung out by an Ole Miss team, allowing three touchdown runs of at least 50 yards.

• And we don't cover them in this space thanks to their unique status as special BCS-enabled snowflakes, but let us point out that Notre Dame trails both Army and Navy in overall record among I-A independents. [derisive snickering]

• This week it's all Southeast Louisiana, who took ULM to the wire in a 21-20 loss only achieved by allowing a fourth-quarter Warhawks touchdown.

• This is your weekly reminder that DAKOTAS ARE POISON STOP PLAYING THEM IF YOU WANT TO LOOK GOOD. Who held No. 6 Nebraska scoreless throughout their entire first quarter? South Dakota State. Of course. Do we have to do everything for you people?

That whole Day of MACkoning didn't work out quite as well as we'd hoped. The MAC came with one good win (Toledo's) and one bad (Northern Illinois').Those two, Boise State, and Army were the lone survivors of Big Six play in Week 4. Mid-majors were 4-13 on the week, which moves them to 14-61 overall.