Michigan State announced last summer they'd be wearing a modified throwback uniforms for their game against Michigan, eventually revealing their Nike Pro Combat threads in September. But leave it to the Wolverines to spoil the Spartans' fashion show, taking the field minutes before today's game with surprise throwbacks of their own (via @bubbaprog): 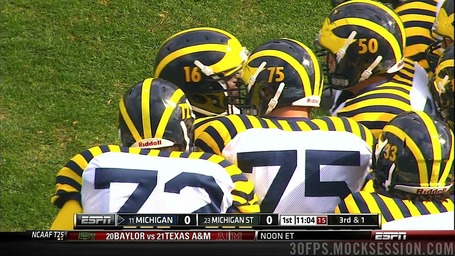 And here's the view from the front. No one saw it coming, but of course the Wolverines would try to upstage the Spartans -- it's not only Ann Arbor vs. East Lansing, but adidas vs. Nike. In case you're not by a TV, here's MSU's Nike Pro Combat uni: 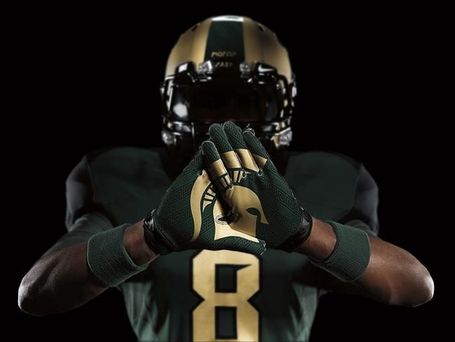 Why black and gold? It's a nod to 1934, as C.J. Shenayder explained in this morning's The Historical:

The Spartans certainly looked different when they appeared on the Michigan Stadium field on Oct. 6, 1934 before an opening day crowd of 25,644 (far less than the venue's 85,752 capacity). Bachman had abandoned the school's green and white colors and outfitted the squad in gold and black uniforms. In time their apparel would earn them the sobriquet "The Black Knights of the Red Cedar."