A Day In The Life Of Denard

Share All sharing options for: A Day In The Life Of Denard 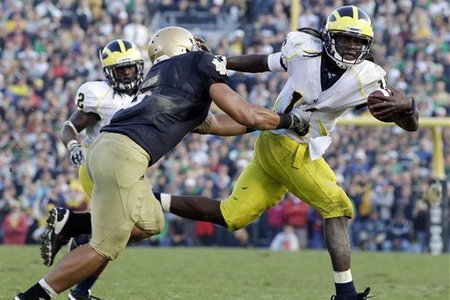 Denard Robinson—seen above living the Heisman pose on the way to a game-winning touchdown against Notre Dame last year—spent the bulk of last fall hypnotizing college football fans and doing his best to single-handedly resurrect a lifeless Michigan program.

Yeah, that sounds like a lot of work on its own, but you really have no idea. In this weekend's Wall Street Journal, we got an excerpt from a new book on Michigan by John U. Bacon. This particular section follows Denard Robinson around for an entire day in 2010.

Four highlights are below.

1. Your reminder that college football is a full-time job.

He rolled into Schembechler Hall, Michigan's football building, at 7 a.m. ... Robinson, who is now 21 years old, looked half-awake when he walked into the training room for treatment on his left knee, which was swollen so badly you couldn't delineate the kneecap. After an hour of receiving treatments that looked like voodoo to a layman, Robinson went to a side room to do some physical therapy.

The worst part, said the Deerfield Beach, Fla., native, was the cold tub, which is kept at 50 degrees. He slowly forced himself down in the water, grimacing the whole way. "'Y'all got it made,'" he said, mimicking the usual charge of his non-athlete classmates. "That's what everyone thinks. They don't see this!"

2. Your reminder that college football players get totally screwed.

Robinson walked past a retail tent selling yellow T-shirts with "SHOE" at the top, "LACE" at the bottom, and an untied cleat in the middle. "Think they'd give me one?" he said, walking by unnoticed.

"Only if you want an NCAA violation," I replied.

3. But being a college football star is pretty incredible regardless.

While Robinson packed his things to go, a female student slipped him a small, handwritten note, which he tucked away.

He walked with Gardner and receiver Kelvin Grady across campus for lunch. He peaked at the note: "For your eyes only," written in purple ink."You seem like a really nice guy and I think it'd be cool to hang out with you. And no, I'm not a creepy stalker! Text me some time." ... Robinson grinned and shook his head. Grady demanded to see it, then started laughing. "Ahhhhh! Same note I got!" he said.

At 7:30, Robinson sat with a few teammates in the commons for dinner. In less than an hour, he ate two biscuits, 16 chicken wings, two Gatorades, two caramel cheesecakes and a big scoop of rice. All told, he consumed well over 4,000 calories that day—which paled in comparison to the linemen's max of 14,000 calories a day.

That was my favorite part, I think.

In any case, as much as the 20,000-word sermons sound the alarm for reform in college athletics, it's actually pieces like this one that make the strongest case. When you really think about what playing big time college entails, it's pretty mind-boggling that were Denard Robinson to accept a free "Shoe Lace" t-shirt, his whole career gets put in jeopardy. That, and 14,000 calories-a-day for lineman—that's pretty mind-boggling, too.

Read the entire excerpt over here, and buy John U. Bacon's book on Michigan here.