The Arizona-UCLA Field-Stormer, Or, The Man Who Would Be Referee

Thursday night, while the world's eyes were on the World Series, a gentleman dressed in a referee's uniform, ran on the field during an awful UCLA-Arizona game, successfully blew a play dead, and started a brawl. And it was glorious.

Share All sharing options for: The Arizona-UCLA Field-Stormer, Or, The Man Who Would Be Referee

Sometimes, the world is every bit as terrible and depressing as the holy books claim it to be. Perhaps you found yourself in such a world Thursday night, when you were doomed -- or, more accurately, doomed yourself -- to watch a miserable UCLA-Arizona college football game instead of an absolutely terrific Game 2 of the World Series. Arizona, a bad team, was preparing to bring a 42-7 lead into halftime against UCLA, a bad team. The End Times would not come, because they would bother: the world had ruined its own self.

And sometimes, everything is a miracle and we all stand as angels in a jester's Heaven, where moths and rust do not destroy, where thieves do not break in and steal. Such glory came to pass on that very same Thursday night. The seeds of our labors sprouted, pushed through the cinders and broken asphalt and animal skeletons, and bore fruit in the light of the doting Sun.

I am not invoking such elaborate imagery here because it's "fun" or any such nonsense. I do so because Thursday night, we witnessed one of the very most ambitious, spectacular field-stormings in the grand history of the art.

The water is wine; the basket is full of bread. The waves of the deep sea lap at our feet. A dead man speaks. Those who bore witness to those miracles surely would not have fully understood what they had seen, so allow me to summarize the event. If I can settle down for long enough, of course:

To the projector. Someone get the lights, please. 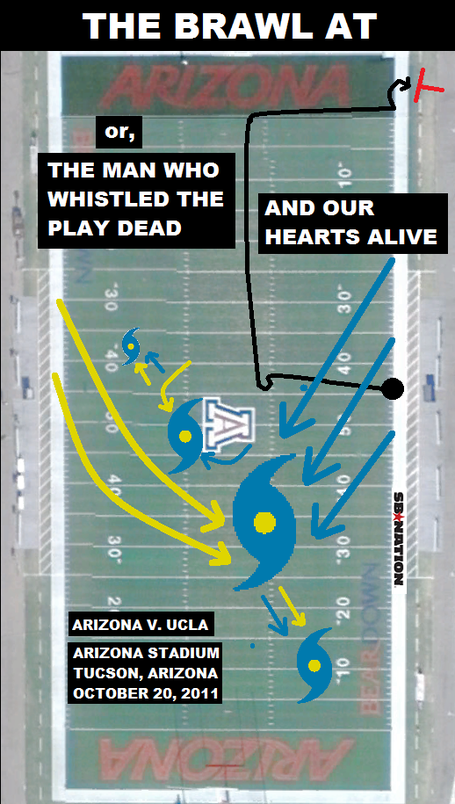 Would the brawl -- or, more accurately, the massive, F5-grade outbreak of brawls -- have happened were it not for he field-stormer? Well, such a contest provided plenty of reason for the players to be frustrated, but a spark was necessary. A fan who managed to blow the play dead, thwarting a downtrodden team's attempt to salvage some measure of respect? That was certainly enough to do the trick.

All season over at Baseball Nation, I have chronicled the adventures of fans who run on baseball diamonds. Football field-stormers are relatively rare. But few field-stormers have ever impacted the actual game itself. And to my knowledge, none have incited a brawl.

We have seen one of the greatest field-stormings in the history of the craft. Perhaps the very greatest. Everything is a miracle. I love you all, each and every one of you.