College Football Rootability Index, Week 8: You Might Win, But You're Gonna Bleed

Friday's College Football Rootability Index returns to help you, the relatively uninvested fan, decide who to pull for in games where you have no established interest. The methods used to determine this are arbitrary; the outcomes are decidedly not.

Share All sharing options for: College Football Rootability Index, Week 8: You Might Win, But You're Gonna Bleed

West Virginia at Syracuse (Friday night). West Virginia is a fun team for a lot of reasons. One is their propensity for lazing around and taking a few laps around the ring before really getting down to business, allowing fighters like Norfolk State and UConn to hang around for a half before going to the locker room. Another is that while in said locker room they get their Red Bull on, find the four plays that will gut the opposing defense like a fish, and then go points-mad in the second half. Syracuse, meanwhile, is 112th in passing defense going into this game, and upset West Virginia last year at home.This is a house fire waiting for someone to fall asleep on the couch with a lit cigarette in their hands, and...hey, speaking of--it's Dana Holgorsen, y'all!

Oklahoma State at Missouri.  Sure, go ahead and just pick Oklahoma State because you know who they are, and you know their offense can put up 50 points at a blink, and you know Mike Gundy is a man, 40, and all too happy to dance with his team and be the charismatic young coach everyone knows him to be. You sell short the skills and charisma of Gary Pinkel, Missouri's most successful coach of the modern era and a media dynamo in his own right.

Just look at the man's range!

Take that, Gundy. You're not the only one who can pull off the theatrical public appearance. Some of us are just into the subtleties of character acting, that's all.

Georgia Tech at Miami.  Miami's Jacory Harris--that Jacory Harris--is third in the ACC in passing efficiency. I don't know how it happened, either, but this is a new year, and offensive coordinator and mountain prospector Jedd Fisch may have something to do with it. The two teams ahead of Miami in this stat? UNC, who the 'Canes plowed last week in a phenomenally dirty game, and Georgia Tech, the team that has run the ball 386 times to a meager 88 passing attempts on the season.

What does this mean for this matchup on a lackluster daytime spread of games? It means we'll probably see both quarterbacks throw three INTs after a year of good behavior, because screw your statistics, nerd, and to hell with trying to predict anything in the ACC.

Auburn at LSU. Clint Moseley is your new Barrett Trotter, who was your new Daniel Cobb, who in turn was your new Ben Leard, who in turn was the new anonymous white quarterback who has ruled the roost at Auburn for much of its history. Moseley gets the rich opportunity of starting on the road at Tiger Stadium against an LSU team who may be better top-to-bottom than Les Miles 2007 BCS Title team, and gets to do so with an offense struggling to find its identity.  The good news: Tyrann Mathieu won't be there to ruin your day. The bad news: the rest of the LSU defense will, and you cannot hand off to Michael Dyer all day.

Pain builds character, though. This is Clint Moseley before the game, and this is what he'll look like after the game. Mmm, muy guapo, Senor Moseley.

USC at Notre Dame. There are just so many real, legitimate reasons not to pull for Notre Dame. They live the gigolo's life of football independence, flush with cash they swindled from a vulnerable lonely widow named Dick Ebersol's NBC Sports. They consistently look down their noses at the rest of college football while lowering their own academic exemptions for athletes, spending huge sums on facilities, and quietly competing just as savagely as everyone else (and without the benefit of the results that come with said competition.) They continue to secretly crave a Jumbotron in their stadium, but decry your poor taste at having one in the first place. They remain the only people convinced of their own magic, drunk on their own stale echoing flatulence and shrinking national relevance as a program.

These are all very bad things. And yet: 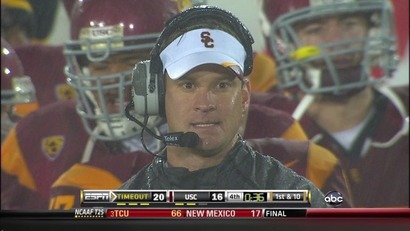 Wisconsin at Michigan State.  The plucky upstarts are always the easy Rootability pick, but Michigan State makes it a bit harder for everyone by being one of the least reliable rides on the Plucky Upstart Circuit. Remember last season's undefeated run that went fine until Dantonio hit the wall in turn three against Iowa, and then finished with one of the most lopsided bowl appearances we've ever seen against Alabama, a game where we feared we would see Kirk Cousins broken on the wheel at midfield? I mean this literally: at one point the Capital One Bowl crossed he line from football into sadism, and became uncomfortable to watch even for Alabama fans. (They have souls, I promise.)

This could look a lot like that, but with less mercy. This is Bret Bielema we are talking about: unlike Nick Saban, he actually likes playing offensive football, and does not see it as an inconvenience one goes through on the way to maiming quarterbacks. Once this cheese gets rolling downhill, people start getting hurt. And this cheese is going to roll, so best be on its good side when it blows through.

Washington at Stanford. Probably the most intriguing game of the day, and on a weekend like this of course that game is a night game on the West Coast. Stanford has looked magnificent while being magnificently underbooked against an early slate including such challengers as Duke and Washington State. They've also been hit by the injury reaper in a most unkind way, losing safety Delano Howell this week with a hand injury. Safety is not a spot you can afford a loss against anyone, but most especially against Keith Price, the Huskies qb who has quietly piled up 21 TDs against 4 INTs in 2011.  Stanford probably won't lose here, but as drunk redneck grandmothers squaring off with bareknuckles against bigger men are fond of saying: "You might win, son. But you're gonna bleed first."

LSU Vs. Auburn: No Badger, No Problem As Top-Ranked Tigers Maul Rivals