Maybe you don't know who to root for this college football weekend. We're here to help with that, and also to warn you that all things are possible when Ron Zook is in charge.

MICHIGAN STATE at NEBRASKA.  Mark Dantonio's on this Crank trip in 2011 and shows little sign of stopping. The Spartan defense has followed suit, playing like doomed men in the second half of games. We don't mean doomed men like Taylor Martinez running from Jerel Worthy down a long dead-end hallway; no, that's doomed as in legitimately doomed, and likely having discussions with themselves about fear, the end, and possible regrets in life (like how one ever decided to end up in a position to be chased by Jerel Worthy.)

We instead mean doomed men determined to take as many pieces of life's hide with them on the way out. You know, like the Spartans in 300, but without all the body-waxing and with slightly better body armor. Little-known fact about the Persians! Like Nebraskans, they were the first to tell you how nice they were before trying to burn your city to the ground. (Emphasis on "try.")

OKLAHOMA at KANSAS STATE.  Ye of faith, heed the perfection of Kansas State, recession football at its finest played with efficient startup spending (first quarter scoring,) tidy management (third in the nation in turnover margin,) and superb finishing skills (undefeated in this, the last week of October.) You prudent types might like the nickel and dime game, and you should, but one busted-ass millionaire fresh off losing his shirt at the tables is headed to town in the form of the Oklahoma Sooners. Did you remember how Bob Stoops once lost a Big 12 Championship game to Kansas State, and still made the BCS?* Well, neither of those things is happening this year.

*The box score for this game just says "DARREN SPROLES" like three hundred times in a row.

WEST VIRGINIA at RUTGERS. Like Kansas State, Rutgers is another group of turnover-dependent recession football specialists. Dana Holgorsen and the Mountaineers would really like to help, but the chances of Rutgers putting together the kind of airtight offensive performance Syracuse had against the Mountaineers is minimal. I mean, come on: Rutgers is 99th in total offense, and Syracuse is 92nd, and the difference seven spots can make against a West Virginia defense struggling to defend stiff breezes is ... never mind. This could totally happen again.

(On the other hand, West Virginia seems well ahead of schedule for Big 12 play in abandoning the notion of defense altogether.)

STANFORD at USC. Beware the late game against Lane Kiffin, especially since he gets awfully aggressive with the play-calling to make up for codger/dad/defensive coordinator Monte Kiffin's falling asleep in the booth after 8:00 p.m. The upset seems plausible both because Stanford has rolled so effortlessly over opponents, and because USC seemed to have solved some of their defensive issues for the moment after stifling Notre Dame in week seven. Then again, this is Andrew Luck throwing against the same secondary who occasionally seemed lost versus Minnesota, a team whose passing game literally consists of "y'all go deep" and "all button hooks."

Plus, as this column is fond of mentioning, this is their head coach: 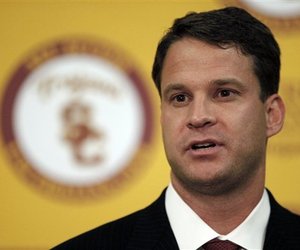 WISCONSIN at OHIO STATE. Ohio State's one-team campaign to eliminate the forward pass as a tactic in modern football continues. If you had to guess how many pass attempts they have actually made in seven games, you would have said something like nine or ten strictly going by gut instinct, right? That number is actually 138 pass attempts, a total of around 19 times a game. If this feels like an affront to Tresselball, it should. Stop with the confounded Air Raid crap, Fickell! If Ohio State passes more than 10 times this game, you're fired, Affliction T-Shirt Boy.

Signed, Some Ohio State Fan Who Really Believes This To Be True

BAYLOR at OKLAHOMA STATE. The sneaky secret of Gundyball: they have a defense, it just only likes to play against the pass.  Oklahoma State is covertly traditional and so totally does not want you to know that they like playing defense, creating turnovers, and then flipping the field for the offense to do their maddening offensive thing to make and keep leads. The Cowboys would be in trouble if they were facing a team with a real ability to rush the ball and play pass defense, and if you made the opposite of that potentially troubling team you would call them "Baylor." The Bears ran for a piddling 78 yards against the Aggies, and are currently 97th in the nation in pass defense.

They do have this decade's Jay Cutler in Robert Griffin III: a very good player doomed to play on mediocre college teams and only flirt with potentially great upsets. He differs from Cutler in his mobility, congeniality, and lack of 19th century portraitface, but otherwise their revenge on life will be the same: an NFL signing bonus, and Jon Gruden saying "[SMALL PRIVATE BCS SCHOOL], huh? How'd THAT happen, GUY?"

CLEMSON at GEORGIA TECH. Paul Johnson and Dabo Swinney should never be in an enclosed space together ever, ever, ever. Swinney is a gregarious young coach happy to mix and match assistants and systems until they yield something like good football, while Paul Johnson has been using the same offense he's used his entire life. One is eager to talk and emotional, while the other has perfected the art of the permascowl and barely polite non-answer. Dabo sports shiny new Nikes, and Paul Johnson has been using the same can of shoe polish on his loafers for the past 12 years, and will stop using it when it runs out, dammit.

I'm basically saying that if they were trapped in a diving bell for two hours, you'd haul the thing up to the surface and find one Paul Johnson, no Dabo, and a very unbelievable story about Dabo deciding to see what it was like to swim up to the sea from 800 feet below the surface of the sea. Fortunately for Dabo, he has someone else to play defense for him this weekend, and someone playing offense, and we'll see who makes it to the surface when Chad Morris is bending Al Groh's mind this weekend one rapidly taken snap at a time.

ILLINOIS at PENN STATE.  The end of a hard-fought game in Happy Valley. Illinois, down 19-18, lines up for the two-point conversion to win the game. An assistant notices Zook speaking rapidly into the headset and runs over.

The assistant is aghast. "Whaa--I don't even. What the hell was that?

Zook smiled. "Something they never saw coming, Jimmy. And that's what true victory's all about."

[Zook then turns into a large turkey, attempts to fly away dramatically, but just kind of skitters along the ground and is placed in a sack by stadium security.]

Note: this is not literally how this game will go, but it might as well because it will certainly FEEL like it.