Friday Night Lights (The Show) Is Going To Be A Movie, Y'all

Share All sharing options for: Friday Night Lights (The Show) Is Going To Be A Movie, Y'all 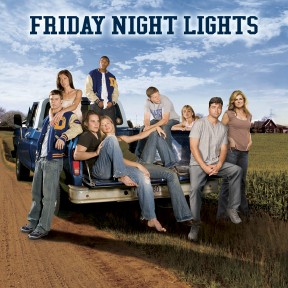 NBC's Friday Night Lights enjoyed a cult following for years, right up until its finale this past winter. And now they're making it into a movie, and we all get to enjoy it just a little bit longer.

"But Friday Night Lights was already a movie," you say. But WHO CARES, YAWL. There can never be enough Texas Forever in our lives. After the jump, Tami Taylor gives us the good news.

As Connie Britton (Mrs. Tami Taylor in the show) tells Us Weekly:

TV's cult hit Friday Night Lights is headed to the big screen for a second time, confirms series star Connie Britton. "It's happening for realsies," Britton, 44 -- who earned an Emmy nod for her role as Tami Taylor -- tells Us Weekly.

FOR REALSIES, YAWL. And just when you thought Tami Taylor couldn't get more adorable, we find out she says things like "for realsies" in real life. As she added:

"Pete is totally fired up to do it and I know Jason Katimis is talking about writing a script. I think it's really a matter of…getting everyone's busy schedules aligned and making it happen," says Britton. "It kind of feels like there's a lot of commitment to it."

"It's so funny to hear [from fans]: 'Do you think they'll do a movie version of Friday Night Lights?' and in the back of my mind I'm like, 'You do realize there already is a movie of it? I was actually in that one too!'"

Yes, there's already been a FNL movie adapted from Buzz Bissinger's book, but the tone and characters of the show were completely different from its predecessors, and the appeal for the second movie should be much wider. (My mom has no idea who Boobie Miles is, but she loves her some Matt Saracen.)

Now, a disclaimer: We're no experts on the movie business, but things like "writing a script" and "getting everyone's busy schedules aligned" can be pretty tough to pull off in Hollywood, so this is by no means a guarantee. This is going to take a whole lotta sacrifice.

A lotta clear eyes, and maybe even some full hearts. But let's make it happen.