If it seems like this weekend's matchup between Alabama and LSU is a hot ticket, well, that's because it is. According to SB Nation ticket partner, TiqIQ, the average ticket prices for this game are the highest of the year. With an average price of $699.10, this easily beats the price of the next highest game ($621.58 for Oklahoma-Oklahoma State). No other game has gone over $600.

Overall, the average price has leveled out in recent days after peaking at $740.23 on Oct. 20, which is mainly due to an influx of tickets on the secondary market. There are about 1,400 tickets available after only 1,100 were on the market last week. That's clearly good news for anyone who wants to see the game, and the "get-in" price is currently $350 after peaking at $390 a week ago.

Generally speaking, Alabama is among the more expensive tickets in college football. Their tickets go for an average of $281 on the secondary market right now, which ranks them second in the nation behind Oregon. Maybe not so coincidentally, they are also ranked No. 2 in the AP poll. LSU, the country's No. 1 ranked team, is currently ranked 14th in average ticket prices ($166).

If you are interested in buying tickets for this game, be sure to visit LSU blog And the Valley Shook or Alabama blog Roll Bama Roll. 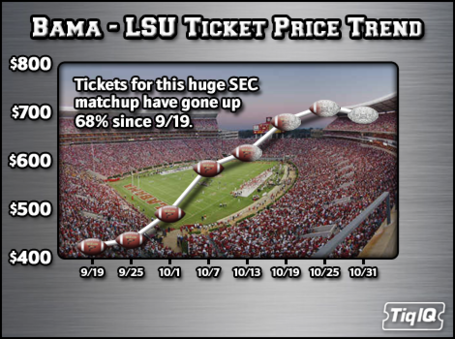