Stanford Vs. Oregon, The Historical: The Wow Boys And The Webfeet

In 1940 Clark Shaughnessy and his Stanford Indians battled the Oregon Ducks in a game that declared the modern T-formation a force to be reckoned with.

Share All sharing options for: Stanford Vs. Oregon, The Historical: The Wow Boys And The Webfeet

When Stanford and Oregon faced off on Oct. 5, 1940 it was the start of a new era of football, although few recognized it at the time. The squad from Palo Alto – then known as the Indians – had installed a new offense under first-year head coach Clark Shaughnessy that has wowed the nation with its debut a week prior.

The tilt with the Ducks - then often referred to as "the Webfeet" by the press - was expected to be the first true test of the T-formation and college football would never be the same afterward.

By the 1940 season, the Stanford program had fallen precipitously from the heights of the early 1930s when the "Vow Boys" (so named because they had vowed never to lose to Southern California – and didn’t) ruled the Pacific Coast Conference.

The 1939 Stanford team won but a single game and was denounced as the worst squad to ever represent the university. The Indians had been winless for two seasons against their Pacific Coast Conference foes. At the end of the season coach Claude "Tiny" Thornhill had been relieved of his duties and the hiring of Shaughnessy wasn’t seen as a step forward.

The journeyman coach had just left a University of Chicago team that had been outscored 308-37 in eight games in 1939, the final season of football for the school as it was abolished by the president at the end of the year. Shaughnessy’s 17-34-4 record from 1933-1939 didn’t instill confidence in Stanford partisans when his hiring in Palo Alto was announced.

Yet while in Chicago, Shaughnessy had earned a reputation as a gridiron innovator and had helped George Halas construct an offense for the NFL’s Bears squad that was beginning to earn respect. It was that offense – the T-formation – the 47-year coach brought west in 1940.

The sober and taciturn Shaughnessy hardly seemed a revolutionary.

As reserved as he was in manner, Shaughnessy was downright aggressive in his envisioning of ways his team would attack the opponents on the gridiron. The prevailing offensive attacks in 1940s sought to use raw power to split the defense and penetrate it. Defenses were typically not built to withstand that onslaught.

Shaughnessy’s T-formation turned the power equation on its head. Using a multitude of fakes and shifting linemen he sought to force the defense to commit themselves, and then ran the ball around them. Instead of meeting the defense head on, Shaughnessy had his linemen use brush blocks that opened holes the Indians' fast moving backs could slip through to reach the second level.

"Instead of threatening a segment of ground scarcely wider than from end to end," Shaughnessy wrote of the offense two years later in Esquire magazine. "We threaten continually the entire width of the playing field."

The hiring at Stanford has also been immensely fortuitous in another fashion. The much derided 1939 squad boasted the ideal talent he needed to run his pioneering offense. Players like Chuck Taylor, Norman Standlee and Pete Kmetovic had been lost in the Single Wing offense but were fast and smart and perfect for the T. 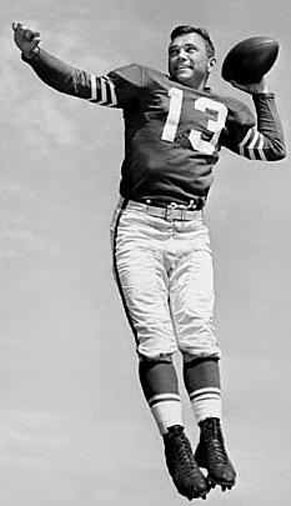 Most of all, Shaughnessy inherited a 170-pound, left-handed tailback named Frankie Albert. Before the coach's arrival, Albert had broken into the starting lineup only sporadically. In the T offense he would become a star.

"[Albert’s] talents were primarily those of a faker; he could fool people," Shaughnessy wrote in his book Football in War in Peace three years later. "He was a poker player if there ever was one and the T-formation gave him exactly the best opportunities to exploit those strengths of his to the utmost."

Stanford unveiled Albert and Shaughnessy’s creation on Sept. 28, 1940 against the University of San Francisco in a college football double-header held in San Francisco’s Kezar Stadium. While the Indians were expected to overpower the lowly Dons, no one was prepared for the electrifying performance Stanford’s new offense provided.

After a sloppy first two possessions, the Stanford offense fell into place. When Standlee blasted though a massive hole to gain 20 yards he was ecstatic as he returned to the huddle.

"Hey! This stuff really works!" he yelled to his teammates.

Indeed it did. The final score was 27-0 and Stanford succeeded in outgaining San Francisco 209 net yards to 33.

Oregon’s head coach Tex Oliver was in the stands scouting the Indian team and admitted that he was startled at how effectively they ran the complex offense from the first game of the season.

"That Stanford team is the most spectacular, trickiest and most colorful team on the coast," he declared, predicting no team in the conference would be able to prevent them from scoring at least once during the season.

In truth, Oliver was gravely concerned his three remaining practices were grossly inadequate to ready his squad for Shaughnessy’s creation. He returned to Eugene and put his squad through a series of four-hour marathon sessions that were closed to the general public. Still, the general public was still not convinced the Stanford threat was real.

Newspapers described the Stanford offense as "razzle dazzle" and "hocus pocus" and not always in the most complimentary fashion. The question, asked the Eugene Register Guard, was if the San Francisco performance was just a "flash in the pan" or indicative of something more substantial.

The Oregon game would be the true test. After two tepid seasons under Oliver, the pundits believed the Ducks were a serious contender for the Pacific Coast title.

The Indians first possession seemed to squelch hopes for a Stanford football renaissance. The Ducks forced a punt and, starting from their own 45, the Webfeet drove the ball inside the Indians’ ten-yard line. Then halfback Buck Berry fumbled and Stanford took over the ball and the game.

Stanford drove the length of the field with plays that left the Ducks defense completely befuddled. With a three yard touchdown dash from halfback Pete Kmetovic, Stanford took the lead. A similar drive in the second quarter was capped by Albert scoring on a goal-line quarterback keeper. A missed extra point gave Stanford a 13-0 lead that would become the final score.

Despite the reputation for flashy plays, Stanford used the T-formation techniques to create rushing opportunities that chewed up minutes as well as yards. The Indian’s tallied just under 200 yards on the ground while completing just 5 of 15 passed on the afternoon for a total of 72 yards.

To counter the offensive assault Oliver resorted to an unorthodox 6-2-2-1 defense that shifted to a five-man front when Stanford threatened to employ its trickery. It was the first of 10 different defensive alignments opposing coaches would throw at Shaughnessy’s offense, and none of them would be successful.

The display of deception that strained the ability of the defense (and spectators) to follow who was carrying the football was startling and only eclipsed by the revelation of Albert as the star of the Stanford squad.

Stanford followed up the victory against Oregon by rolling undefeated through the rest of the schedule and earning a berth in the 1941 Rose Bowl against Nebraska. By that time they had been dubbed "The Wow Boys" by the press and they lived up to that billing on New Year's Day. The Indians downed the Cornhuskers 21-13 to claim the Pacific Coast championship and the T-formation became a sensation.

"The day of tug-of-war is out," declared sportswriter Curley Grieve after Stanford’s Rose Bowl victory. "Clark Shaughnessy and his Stanford Indians have definitely killed it."

They had help. The Chicago Bears had won the pro title on Dec. 8 with a decisive 73-0 win over the Washington Redskins using Shaughnessy’s T. Coaches across the country began a mad scramble to install the offense.

Stanford never rebottled the lightning the way it did in 1940. The following season was a 6-3 disappointment and Shaughnessy left Palo Alto following the 1941 when Stanford discontinued football due to World War II. He would coach at Maryland, Pittsburgh and Hawaii as well as in the pro ranks but never with the success he had with The Wow Boys.

Yet his legacy was complete. By 1950, the overwhelming majority of college football programs had switched over to the offense and the phrase "going to a T party" became an ubiquitous clip in sports columns. The scheme would dominate football at the college and pro levels for decades and changed the style of play in the sport forever.