The Penn St. Nittany Lions have fallen to the Nebraska Cornhuskers, 17-14. This is important for many reasons, almost all of which you're likely aware.

A little bit of trickery set the Nittany Lions up to pull within three. Curtis Drake threw a 16-yard pass back to quarterback Matthew McGloin, with Stephfon Green scoring his second touchdown on the next play. PSU's defense held strong on the next possession, giving their offense the chance to win with four minutes left.

The Nittany Lions faced a fourth down in their own territory with just under two to go, sending Silas Redd into the line. He was stopped short, and, after a review, all that was left was for the Huskers to burn through Penn State's time outs. A look at the Redd play, via @cjzero: 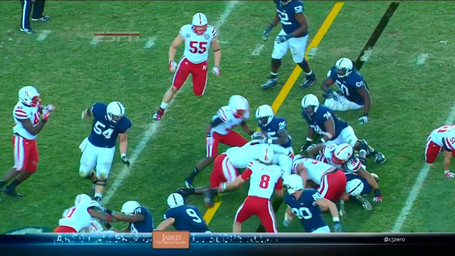 However, Penn State stuffed Rex Burkhead on a fourth down toss of their own, giving themselves life with 49 seconds left. A Nebraska holding penalty put Penn State at the Huskers 37, but a hurried Hail Mary was all they could muster. Nittany Lions fans gave a standing ovation as soon as the game ended, and both teams again gathered at midfield.