This is how Ole Miss's world ends. Dooley needs to support the troops... in his pants! Illinois goes from 6-0 to 6-fire Ron Zook. It was supposed to be for A&M, but instead terrible thing are happening to their fans on television. And we get up to quota on Ty Willingham references.

Hey! This is late, so I'm enjoying schadenfreude as you gnash your teeth. You can enjoy schadenfreude because I'm thinking about taking various electronics I own and shooting them in the head. It's a win-win-lose-lose situation. Anyway…

So… this is a first. Ole Miss is in the post-firing phase where the excitement of not having Houston Nutt to kick around any longer is morphine that dulls the pain of a 27-7 loss to… Louisiana Tech? Yeesh. Up that dosage.

Yes. Morphine. The Best Morphine Ever: 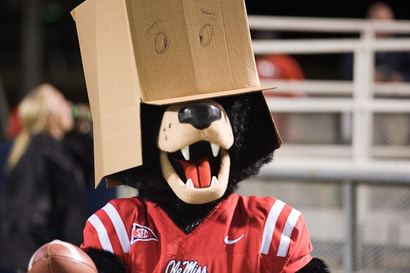 The sophomore inside the costume was taken out back with my electronics and shot afterwards. The whereabouts of Houston Nutt's stapler remain unknown. 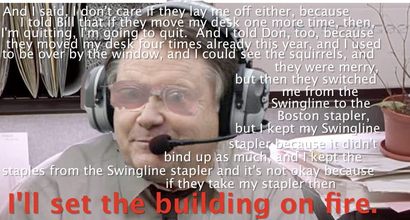 And Ole Miss fans glanced up briefly before returning to their Mike Leach shrines.

Actually, no, they figured out that when Ole Miss wants to run Tobias Singleton they actually hold up a sign that says "T.S." They also figured out that this is applicable to all of their running plays.

Maybe it's just a wild circumstance of chance that each of the fifteen signs I saw held up matched the player who would get the ball.... even in times when it made no sense for that player to get the ball. If there's that much of a coincidence, they need to change the "random" letters on their signs because we somehow magically lucked into the most predictable playcalling system imaginable outside of the "Madden opponent who very slowly chooses which play he is going to run" method.

If I know anything about college football fanbases on the internet, this caused mass suicide. And gifs.

It's not Nutt's fault.

Snead took the good signs with him to the NFL.

Jesus Christ jumping on a pogo stick: this is the worst team in the world.

There used to be walk-ons (or something) with pads and off-colored jerseys (eg, red if we were white) signing in plays to the quarterback in just about every previous game I can remember. This is pathetic.

If true, at least the coaches are losing with some gusto. They are fully embracing their incompetence by expressly stating who will get the ball. …

The morphine is insufficient, but at least this inspired the Rant of the Week:

I’m telling you friends, this is without a doubt the bottom of the barrel. And here is one thing I don’t understand. In the business world, when a company fires someone, the last thing one wants is for that person to hang around and mess with things. Its obvious that the job has failed. Its fairly clear why. The person responsible for the mess has been canned. Why is he still here? To perpetuate idiotic shit like this?

Our place with the catfish and mullet of the college football world, feeding on the bottom in the obscurity of darkness, is being further solidified by an even more unbelievably stupid action of the bone headed leaders of this University. Does Pete Boone have nekkid pictures of somebody? How can such an insane policy exist in the modern world of football? How can this situation approach tolerance? Give me a break!

I’ve actually lost the desire to watch football of any kind. This is what you’ve done to me Dale, and it saddens me to no end. The only reason I have for sticking around is to see what kind of hilarious bullsh-- they come up with next.

Rebels, you've somehow done it: the Tears of Unfathomable Sadness are yours despite having already fired your coach. It's beautiful. The rest of the week in spleen…

Look at the ACC Network trying to fabricate crowd excitement today. The cameras at this game are using limiting sticks — similar to the ones machine gunners use so they maintain their fields of fire — so that the cameras don’t pan beyond the small pockets of crowd.

That's the NC State-BC game, and if you're noting a lack of cartoons featuring Frank Spaziani as Mario that's because BC actually won. NC State fans are invited to melt down in the comments of the above running diary, and waste little time getting weird and caps-laden:

Just like I have said for 2 years–no recruits, poor coaching ability —by the entire staff, obviously the staff cannot "fire up" up the team except for one game (UNX), consistently out coached by ALL age level opposing coaches and nothing but lame excuses for inept coaching. The facts are there and have been for at least 2 years. I am not in the least bit surprised at TOB’s results. HE CANNOT GET IT DONE BUT REFUSES TO MAKE ANY CHANGES; THEREFORE, HE HAS SEALED HIS OWN FATE. WHY LINGER OVER WHAT WAS OBVIOUS LONG AGO. Fire him now and pay for a capable leader or remain the national laughing stock we are now.

Or generic and exclamation-point laden:

I’m done!!!1 i will not be at the next two games!!! This is rediculous!!! We can’t prepare for the worst team in the league!!! This coaching staff has got to go!!!!

That comment could be spam, actually. If it isn't someone should make a bot that hits up sports message boards and just posts that. Eighty percent of them will be left to stand.

Nobody was happy about the FSU/Miami game. Even victorious Florida State fans have slapped together a 17 minute lowlight reel of blown calls. The solution is to make a documentary:

Send it to espn

Get the other Acc teams to. Letsntry to get the acc officiating on 30 for 30 or something

The working title is "CONSPIRACY: That one game Florida State won by less than they felt they should have."

Syracuse was flying high after dismantling West Virginia. Three weeks later there's a man in a hat calling them "punks" and making references that I'm not entirely sure he understands are a Not Cool in the post-Paterno era:

This man is sponsored. Get thee to your webcam.

Cincinnati both lost and lost its starting quarterback, but there are no Cincinnati fans—I checked. Moving on…

I'm a little worried about the guy behind A Lion Eye, you know, the one who tapes himself in miserable situations related to Illinois football and puts the results on the internet. I have good reason for this:

I wrote a long post yesterday entitled, get this, "I’m In A Very Dark Place".  Be very glad I did not post it.  The reality of our 4 game losing streak hit me like a wave while reading bowl projections yesterday, and I typed out some of the most depressing, self-centered drivel in the history of blogkind.

I realize that I’ll be in Rantoul in a few summers, chronicling the 7 Ways Illinois Can Turn Around This Offense, I’ll look around in the bleachers, and I’ll be the only one there.

But he didn't post it, so… yeah. Instead he writes a heartfelt eulogy for Ron Zook that does not include the phrase "I'll miss your insane punting decisions," which is my heartfelt Ron Zook eulogy. It is effective. Or it is November:

An emailer sends along his co-worker's whiteboard: 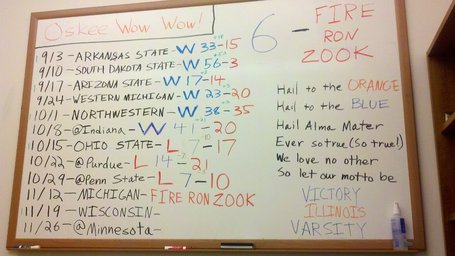 Wait until you lose to Minnesota first.

the only thing we covered up is free tattoos

Still, it's got to hurt to get smack-talked by Danny Hope and then watch him back it up:

Two years ago in West Lafayette, Indiana, the Purdue Boilermakers inexplicably laid waste to a lethargic, uninspired and disinterested Buckeye football team in front of a lethargic, uninspired and disinterested crowd. As the clock ran out on the Buckeyes comeback attempt that Saturday, Purdue's 'stache in charge made what appeared to be a ill-timed, poke-the-bear-type comment.

Tressel put it on the Boilers the next year. This year… not so much. As a result, Ohio State may no longer drink rice beer brewed by Europeans:

Ohio State Football's mancard is hereby revoked.  When you have the Rose Bowl begging you to keep winning, you don't lose to Purdue.

This season is as unmanly as choosing the wrong light beer.

Texas scored five points this weekend and lost the best name in college football to an ACL tear. Neither of these things is sitting well, particularly the latter:

I hope Missouri upgrades their agriculture department in accordance with their SEC status so they can do something about the shag-carpeting painted green they play football on. Faurot appears to have a gopher infestation and some sort of photosynthetic grass AIDS bubonic-mange underlaid by titanium bear traps. Fozzy blows out his knee, Henry Josey the same, and Malcolm Brown and Joe Bergeron were deemed unavailable to play on this municipal golf course by training staff after their pre-game warm ups. I hope Kenny Vaccaro can get a targeting penalty on their head groundskeeper.

Texas is down to its fourth-string running back and can start invoking Angry Texas Running Back Hating God at will. (Iowa, you're not off the hook until Coker graduates with all of his limbs and sanity.) 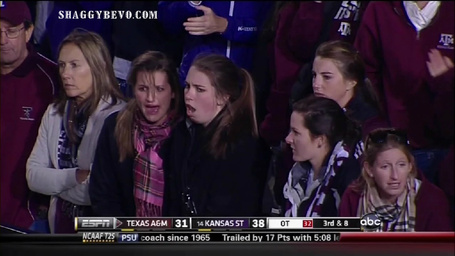 It was suppose to be. It not.

You know what we haven't had enough of this year? Washington fans comparing their current coaching staff to Ty Willingham. Problem solved:

All the smiling on the sidelines was very Ty-era ish

Does this team expect to win or lose?

Someone remind me how much we've improved since TW

I blame Neuheisel in general

I am appalled at the Non-Exchange Of The Non-Week:

Postal91: We need pissed off players.
DiggyDawg: Like Empman?
MadDawg98: Emptman roaming the sidelines would help.

Not sure if serious. Husky fans apparently don't remember the name of the best defensive player in school history. This is like Michigan fans remembering Steve Woodson's Heisman, or Tennessee fans wishing Eric Gary would come back to coach the secondary, or Penn State fans suggesting Harvard Narrington should be the linebackers coach when PSU cleans house. Shame if serious.

Florida is so far away from the consolation of a new coach that all current pain is magnified. They just hired Charlie Weis… to do anything. However, they do have a I-AA team on the docket next weekend, and they're in for it:

And we've got a new challenger in Old Hated Coach Constantly Referenced:

And one in the extremely rare category of Old Loved Coach Now Kind Of Hated:

How does Spurrier sleep at night?

Can this guy really enjoy beating up on his alma mater year after year? The only thing stranger to me are Gator fans who still cheer his every move. Weird. Jeremy Foley, who should have sleep issues of his own presently, should deduct a win from Spurrier's UF coaching victory column for every game he beats us.

Florida is going to be the only team in the country looking around at two former national-title-winning coaches of theirs working elsewhere. If they don't get back to their previous level every Spurrier/Meyer game is going to be a knife in the eye.

So at least you've got that, Tennessee. You have nothing else save this episode of Your Head Coach Or The Internet? Door A:

This is like we're in advanced football school of beat-down learning.

This team is an embarrassment to our once proud football program and history.

Door A is Derek Dooley; Door B is some guy on VolNation with this avatar:

Dooley also needs to support the troops in his pants:

Dooley needs to ditch orange pants and put on some combat fatigues. Show some fight

We can not lose to Vandy. Fire this team up.