Oklahoma Vs. Baylor 2011: Can Deep Receiving Corps Steal One For The Bears?

Baylor has strength and depth in the area that has most successfully punctured the Oklahoma defense. Can the Bears take out the Sooners for the first time ever tomorrow in Waco?

Share All sharing options for: Oklahoma Vs. Baylor 2011: Can Deep Receiving Corps Steal One For The Bears?

From 1996 to 2009, Baylor went 14-98 in conference play. In the four seasons before Robert Griffin III returned to full health in 2010, the Bears went 6-26. It stands to reason, then, that their improvement to 7-7 since the start of 2010 has been an incredible accomplishment. The Bears still cannot play defense, but the job Art Briles has done in simply returning Baylor to respectability after almost two decades in the wilderness is to be commended. Briles has beaten Mack Brown, Bill Snyder and Gary Pinkel (twice). He has not, however, come anywhere close to taking down Bob Stoops and Oklahoma. Baylor is not only 0-4 against the Sooners in Briles' tenure, but their average loss has been by a cool 29.5 points.

With a banged-up Sooner squad heading to Waco, is this the year Briles adds one more scalp to the collection?

Oklahoma still holds the edge in this battle, but there's no question that, as injuries have taken their toll, the Sooners are not the team they were in September. Of course, neither is Baylor.

Remember Adj. Score, a measure used extensively throughout the summer preview series? It is a measure intended to look at how a team performs from week-to-week, adjusted for opponent. Looking at Adj. Scoring Margin, then, give us a hint to the team's general trends. Both Oklahoma and Baylor have trended downward since peaking around weeks four and five. 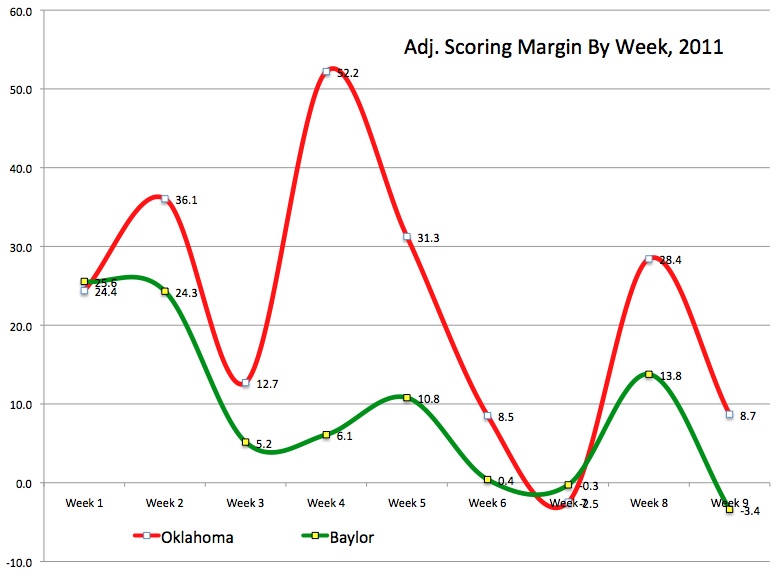 The reason for these teams' downturns has differed. For Baylor, it is all about the defense. Whatever tricks new defensive coordinator Phil Bennett unveiled after the first couple of weeks became scoutable; opposing offenses adapted and have treated the Baylor defense like, well, last year's Baylor defense ever since. The Bears have been a sieve since Week Three, allowing at least 30 (real) points in all but one game (when they allowed 26 to Iowa State).

The offense has regressed from immortal to merely very good, and it has been enough to stake the Bears to a 6-3 record; but it is difficult to see Baylor slowing Oklahoma down, even without Sooner receiver Ryan Broyles and running back Dom Whaley, both of whom are out for the season.

The question, then, becomes whether Baylor can light up the scoreboard enough to take down the Sooners. The initial outlook is not altogether poor for the Bears.

In a basic sense, football is about matchups. We tend to talk about "the running game" or "the passing game," but a contest can swing not on a "running game" as a whole, but on how a left guard handles a defensive tackle, or how a nickel back covers a slot receiver. Both of these teams know this quite well.

Almost four weeks ago, Texas Tech handed in perhaps the most baffling result of the college football season: they ended Oklahoma's decade-long conference home winning streak by bolting to a 31-7 lead and holding on desperately to win, 41-38.

Six drops and a fumble from OU's great trio of receivers -- Broyles, Kenny Stills and Jaz Reynolds -- did quite a bit of damage, but Tech was able to score 41 points primarily because they found a matchup advantage and exploited the hell out of it. The Sooners were missing linebacker Tom Wort and, more importantly, cornerback Jamell Fleming. Linebacker Corey Nelson was playing with torn ligaments in his wrist, and safety-backer Tony Jefferson was playing on a bum ankle. Tech exploited soft linebackers with a couple of devastating inside screens that resulted in Alex Torres weaving through arm tackles for long touchdowns. They also mercilessly attacked Fleming's replacement, sophomore Gabe Lynn, until the Sooners took Lynn out of the game. By the time Oklahoma could find adjustments that worked, they were down 24 points.

Baylor, meanwhile, played the same game against Missouri two weeks ago. The Bears scored just 13 points against the Tigers in the first half, slowing themselves down with a red zone fumble and a missed field goal. But two things began to swing the game for them: 1) defensive fatigue and 2) a new matchup advantage. Baylor ran 51 plays in the first half, and the Tigers began to crumble after the 50-play mark. But more importantly, Mizzou safety (and nickel back) Braylon Webb went down with a knee injury. Spotting an advantage in the slot -- most specifically, No. 3 receiver Tevin Reese matching up against backup safety Matt White -- Robert Griffin III threw just seven times combined to primary receivers Kendall Wright and Terrance Williams, electing instead to focus on Reese. He zoomed by White to the tune of four second-half catches for 145 yards, and after averaging just 6.4 yards per pass in the first half, Baylor averaged 14.9 after halftime.

Baylor has depth in the one area that can significantly hurt Oklahoma tomorrow: the receiving corps. Reese is suddenly surging (13 catches for 290 yards and three touchdowns in the last two games), Terrance Williams is still a viable threat (41 catches, 658 yards, eight touchdowns) and Kendall Wright is still Kendall Wright (81 catches, 1,073 yards, nine touchdowns).

The Sooner secondary has gathered itself a bit -- Fleming, a wonderful corner, is back in the fold, Lynn has been relegated back to second string, and Jefferson and Nelson are much closer to full health after a bye week. But if there are holes to poke, Baylor will find them.

Oklahoma's offense is still quite good without Ryan Broyles, but if Baylor is keeping up on the scoreboard, and the game reaches "somebody needs to make a play right now" territory, the Sooners will miss Broyles more and more. While the odds may still be in Oklahoma's favor, this is Baylor's best chance to take them down in quite a while, and it would behoove them to pounce if they get the chance.