In 1991, the Atlanta Falcons went undefeated in six games against teams from the state of California. To that point, the Falcons had almost never gone undefeated in anything, so it was entirely appropriate for local madman (and coach) Jerry Glanville to commission a five-foot-tall California Trophy, which he presented to himself for his achievement.

It's also entirely appropriate for the Kansas St. Wildcats to celebrate beating every Big 12 team from the Lone Star State by proclaiming themselves Texas State Champs: 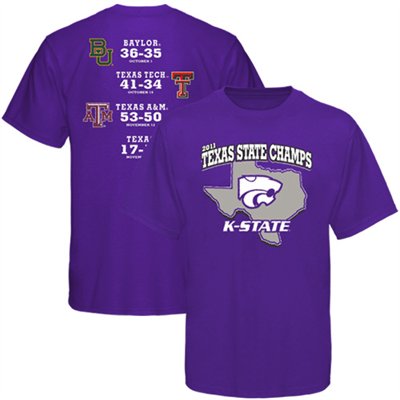 Three teams from Texas reside in the AP top 25. This is nothing new. But Baylor, TCU, and Houston instead of Texas, Texas A&M, and ... well, TCU makes more sense here than Texas Tech would, so that part's not a surprise. But still!

For more on the Wildcats, visit K-State blog Bring On The Cats.