Arkansas Vs. LSU: Can The Razorbacks Actually Win?

LSU is just on a different level from everyone else in college football this season, but a surging Arkansas squad might have as much a chance to do some damage as anyone.

Share All sharing options for: Arkansas Vs. LSU: Can The Razorbacks Actually Win?

We all have our different reasons, but outside of Alabama and Louisiana right now, we all appear to be rooting for Arkansas to beat LSU this weekend. Maybe we don't want to see an Alabama-LSU rematch. Maybe we don't want to see an all-SEC national title game. Maybe (in my case) last week was just so damn much fun that we don't want the chaos to stop. But virtually every post or column about the coming weekend begins with something to the effect of "Let's assume for a moment that Arkansas beats LSU in Baton Rouge..."

So this is a pretty fair question, then: can Arkansas beat LSU?

The short answer, of course, is probably not. LSU is just on a different level than everybody else right now. In this week's F/+ rankings, they are as far ahead of No. 3 Boise State (9.6 percent) as No. 12 Michigan is ahead of No. 39 Pittsburgh. Arkansas, meanwhile, may be headed quickly in the right direction, but they still rank just 11th overall. At home, LSU is projected to win by 20.6 points.

So instead of focusing on whether Arkansas can beat LSU, let's focus on why they can.

Before you can even think about beating LSU's offense or defense, you have to figure out how to match them in special teams. Special teams are vital to winning football games, and in the Tigers' two biggest wins this year, this unit played a prevalent role. Against Oregon, Tyrann Mathieu stripped Kenjon Barner on a punt return and scooped the ball up for a game-turning touchdown. Throw in a 44-yard field goal, and two punts inside the 20, and you've got a good portion of the reason LSU beat the Ducks by 13 points. And of course, against Alabama they converted all of their field goal attempts, blocked an Alabama field goal and watched three other 'Bama attempts sail wide. They are fifth in Special Teams F/+, and they have ranked higher than that most of the season.

Of course, Arkansas plays special teams, too. They rank 10th in Special Teams F/+, powered mostly by some incredible return abilities. Joe Adams has grown bored with simply returning punts for touchdowns (he has averaged 16.2 yards per return, third in the nation, and scored three times); he has to troll his opponents while doing so. Meanwhile, two different Razorbacks have returned kickoffs for touchdowns: Dennis Johnson (25.6 average) and Marquel Wade (29.6). The Hogs are competent in all areas of special teams -- punter Dylan Breeding has averaged 44.6 yards per boot, place-kicker Zach Hocker is 12-for-15 on field goals under 40 yards and boots 41 percent of his kickoffs for touchbacks, etc. The Hogs are vulnerable to the occasional solid return, but in all this is every part a Top 10 unit. If you can prevent LSU from pinning you deep with Brad Wing, score the points available to you (via field goal), and perhaps flip the field a couple of times via return, you just went a long way toward beating the Bayou Bengals.

According to the Adj. Score measure we all know and love (right?), three of Arkansas' four best games of the season have taken place since the turn over November. (For more on Adj. Score, start here and work backwards. In short, it is a way to look at week-to-week performances adjusted for opponent and, to an extent, luck.) 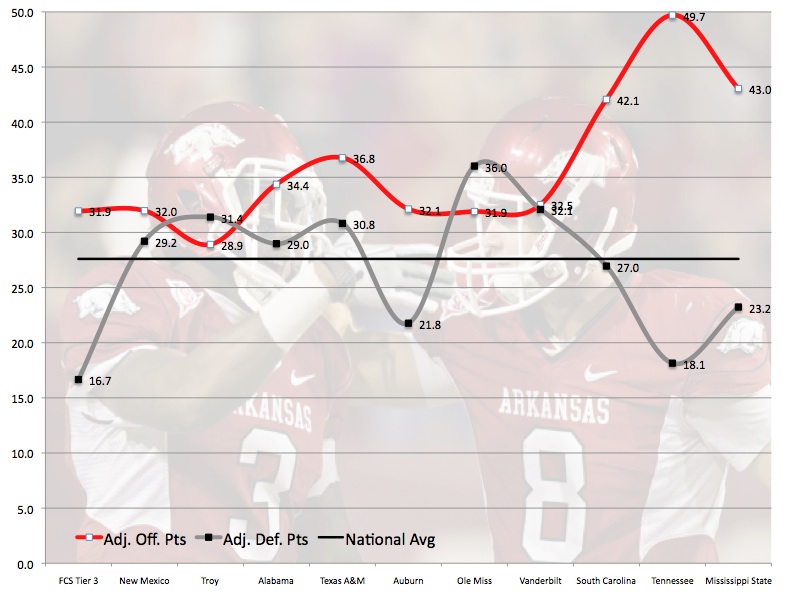 Not too long ago, Arkansas was a decent team taking advantage of a slate of relatively weak offenses. In the last three games, however, both the Hogs' offense and defense have raised their respective games. This version of Arkansas can absolutely beat LSU. LSU has still been a little bit better, mind you... 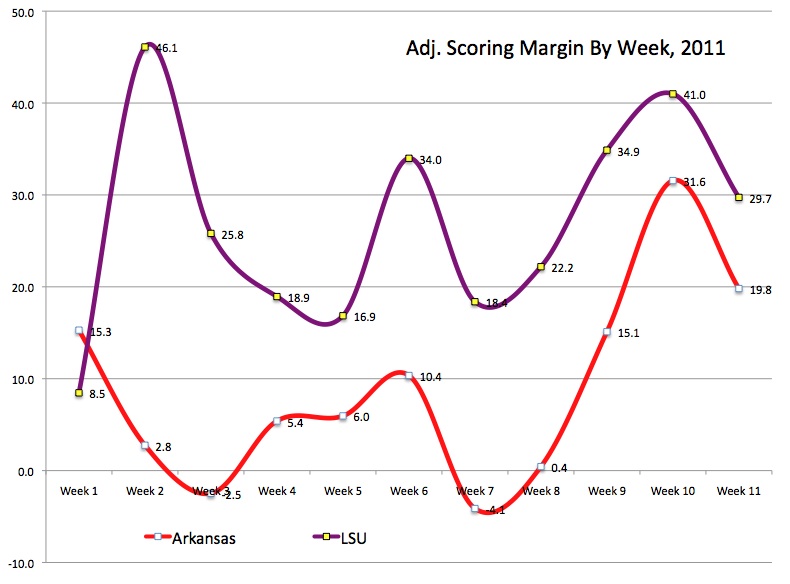 ...but Arkansas has still shown they can play at the most elite of levels recently.

But what has given Arkansas their November boost hasn't been the passing game -- it has been a surging running game. Dennis Johnson battled through injuries earlier in the season, but he has found his rhythm. He rushed for 160 yards in just 15 carries against Ole Miss, and he has gained 493 yards in just 64 carries (7.7 per carry) in the last five games. Arkansas' passing game was good enough to get the Hogs through some early tests despite an iffy running game; now, the Hogs can seemingly do whatever they want on offense. We still apparently don't know if Knile Davis might play, but with Johnson's recent proficiency, it probably doesn't matter.

In all, LSU has cornered the market in hopelessness in 2011. They are good enough to beat you with the big plays, but they are so good at the little things that they can beat you playing things close to the vest. They are No. 1 for a reason, in other words. But the Arkansas team that has taken the field in November is capable of going toe-to-toe with the Tigers for quite a while. Will it be enough to give fans the second helping of chaos that we have been craving? We'll see. But I am much more confident in the Hogs' chances now than I would have been a month ago.

Arkansas Vs. LSU Final Score: Tigers To Atlanta And So Forth