Texas Vs. Texas A&M, The Historical: The First And The Last

Texas and Texas A&M have met on the gridiron 117 times for one of the longest running rivalries in college football. The first game was a one-sided contest in Austin on Oct. 19, 1894.

Share All sharing options for: Texas Vs. Texas A&M, The Historical: The First And The Last

On Thanksgiving Day, the third longest running rivalry in college football will likely come to an end as the University of Texas and Texas A&M face off for their annual clash.

The two programs have met a total of 117 times, including 63 times on Thanksgiving (UT leads the series 75-37-5). Both schools make note of the rivalry in their fight songs, and the annual matchup has spawned elaborate pre-game traditions such as Aggie Bonfire and Texas' Hex Rally.

It will all come to an end next season. The Aggies will shift to the Southeastern Conference leaving the Longhorns looking for a Big XII foe to close out the football season. To date, there are no plans by the schools to schedule a game in the future.

The first clash in the series in 1894 is one of the seminal moments for both storied programs. 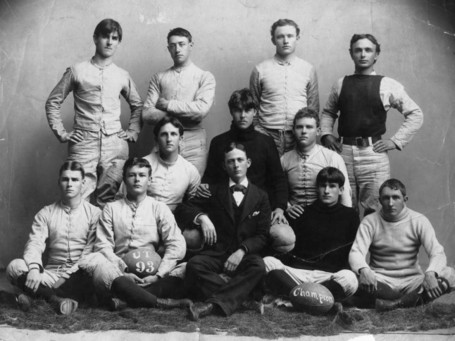 When brothers Paul and Ray McLane returned home to Texas in 1893 after spending a few years at school in the East, they brought with them a game they had learned about from watching it being played on the Ivy League campuses.

The two corralled more than a dozen UT students into joining their team and took on a ball club in Dallas that had been playing football for more than a decade by that time. The boys from Austin prevailed 18-16 and Longhorn football had begun (although the team was then known as the "Varsity." The appellation of "Longhorns" wouldn't appear until 1903).

That inaugural season Texas played the Dallas Athletic Club once again as well as the San Antonio Town Team twice and finished with a 4-0 record. During the summer the Longhorns hired Reginald DeMerritt Wentworth, formerly of Williams College in Massachusetts, as coach for the sum of $325 and expenses.

Unlike other schools, which developed social clubs and fraternities, the Corps of Cadets was encouraged to be a single group encompassing all students of the school

Athletic clubs were introduced at Texas' Agricultural and Mechanical College as early as 1892, and by 1894 the university was sponsoring the gridiron team. In February of that year the school paper, The College Journal, proclaimed the institution now "boasts a crack football team."

The teams were known as the Cadets and, after the turn of the century, as the Farmers. The term "Aggies" would not appear until after World War I and would not be formally adopted by the school until 1950.

The Cadets, led by player/coach F.D. Perkins, traveled to Austin's Hyde Park on Oct. 19 for the UT squad's season opener. Reportedly, Texas A&M won the coin toss. It was the high point of the game for the visiting team. The Cadets fumbled the opening kickoff and Texas' "Varsity" scored two plays later. It only got worse from there.

The account of the game in the Austin Democratic Statesman described the A&M squad as "gentlemen" and lauded the players for their "pluck" but admitted " they were outclassed as football players."

"Had it not been for that they were physically unable to cope with the giants of the Varsity team, they would have stood a better showing for scoring," the anonymous sportswriter opined. "Every time the Varsity boys made a catch-as-can player, the A&M college boys went down to the dust like so many ten pins being knocked down."

The final score was Texas 38, Texas A&M 0 -- a score made even more humiliating by the fact touchdowns only earned four points in that era.

Texas went on to defeat Tulane, Arkansas, the San Antonio Town team and the Austin YMCA team (twice). The only loss was to a visiting Missouri squad for the final contest of the season on Dec. 14.

The Texas A&M football squad was so demoralized by the defeat they scrapped the remainder of the schedule except for a contest against Galveston Ball high School six weeks later.

The school didn't field another team until 1896 and they wouldn't play Texas again until 1898. That produced an even worse outcome, a 48-0 defeat in Austin - the largest margin of victory in the history of the rivalry.

The Cadets wouldn't score a point against their intra-state foes until a 12-0 victory against the UT Varsity in Austin, the ninth game of the series. The year 1901 would see the game held on Thanksgiving Day for the first time and it has occurred on the holiday a total of 63 times.