Texas And Texas A&M: A Strange Divorce In The Church Of Football

Texas and Texas A&M played their final conference game on Thanksgiving and signed their divorce papers. Spencer Hall bore witness as everything got sort of sad and weird all at once.

Share All sharing options for: Texas And Texas A&M: A Strange Divorce In The Church Of Football

The band on the field is not playing "Bohemian Rhapsody," or dancing, or high-stepping, or even thinking about playing "Don't Stop Believing." They stand in neat files, stock still in the endzone. No one is leaving to get hot dogs save for a few Texas fans, but even most Longhorn fans are agog and watching.

I wait. The front line of trumpets hold white placards with a gigantic block "T" on them. They waggle in a coordinated pulse, and the signs flip over, and then back with another flip of the wrist. The band members look indistinguishable from the ranks of some branch of military only extant in movies: brown pantaloons tucked into polished leather cavalry boots, brown short-sleeved shirts, and drummers with marching snares slung low over one hip.

The show begins. They march with precision and decided slowness, like an old screensaver of brick tunnels leading into brick tunnels. They play the same songs they always have, and march in the same formations they always use: meshing lines, interlocking diagonals, and in a finale an "X" that rotates like a conveyor belt, turning in on itself. It is the marching band equivalent of running the Notre Dame Box Offense against Pete Carroll's 4-3 Over defense. 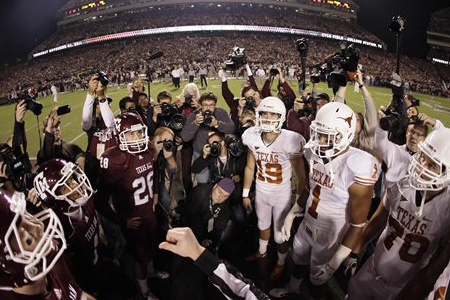 Everyone at the game is a witness to a divorce proceeding. This will be the last game between Texas A&M and Texas as Big 12 Conference mates prior to the Aggies' departure for the SEC. The reasons on paper are simple: A&M will receive an equal share of television revenue as a member of the Southeastern Conference, something it does not have now as a member of the Texas-dominated Big 12. They will be able to sell their own local media rights. They will have an increased national television profile.

These are dry facts, and dry facts are the bones that the meat of real life uses for support. To say you understand the story based on the information is like saying you've met the Elephant Man because you saw the skeleton. The relationship between the two schools is more than numbers. It is about egos, about Texas politics, and ultimately about a sudden shift in identity neither school seems ready to embrace or even accept.

There are signposts pointing towards that inexorable future. The overalls of Texas A&M fans, typically painted with "RED" and "ASS" divided between buttcheeks, bear slogans reeking of anything but regret at leaving Texas behind. 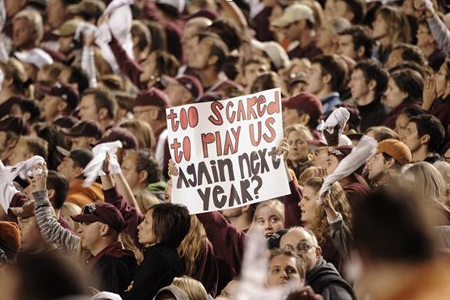 "SAW 'EM OFF ONE MORE TIME"

Maroon SEC t-shirts bob in crowds milling around Kyle Field's gates. SEC flags fly over tailgates, a slew of them, in fact, enough to qualify as several very large loads of laundry. Mike Slive would be overjoyed to survey the camp. It's as if a hundred thousand soldiers had in an instant switched allegiances, and turned toward a new enemy. They do not know who to shoot at, however, or what is coming their way. The comfort of a familiar enemy is gone.

Kyle Field is unusual in that it is labeled on both sides, as if there were any confusing three tiers of swaying, braying hell from any other structure on the horizon. There are three large structures in College Station: the Aggieland water tower, the Albritton Bell Tower, and Kyle Field. All three are visible from miles away. Navigating by sight remains one of the small joys of driving to strange places in Texas.

In case you were confused, there it is on the side of the stadium: KYLE FIELD. These pants are not fancy: the lettering is a plain and stark as a lot of the buildings on campus, and as basic as the rolling, ranchy landscape.  An SEC fan who came to a game at Kyle Field said, "Yeah, there's really not much there. Just a warning." This is Texas. You should expect and desire large amounts of nothing offset by things of great size and excess. Turn the right way on campus, and you could hunt deer just adjacent to a field of horses. Turn the other, and there is a concrete hate barn so loud the crowd once received a flag for delay of game.

The pace pregame is laid-back, too. In the 1960s and '70s, the LSU/Texas A&M rivalry was an intense one. This seems obvious given the culture clash between the schools. Texas A&M fans spend most of pregame relaxing and cooking things over open fires. (My hoodie, days afterwards, still smells like mesquite and oak fires. I have no plans to wash it.) Texas fans received some catcalls and hooting, but very little compared to what you would see elsewhere. I have seen children accost grown men at LSU games with "TIGER BAIT!" in the middle of busy sidewalks, and watched mothers berate their children for insisting that no, Mom, you might not want an opposing player to be injured on a play. The contrasts could not be more stark. Putting the two together sounds like putting a Baptist minister and drunk atheist in a hot holding cell for eight hours with the air conditioning turned off and one fan between the two of them. According to most older fans of both teams, it was worse.

The band bobs by with the even, rolling gait of people who are used to marching in step. A clutch of Texas fans next to me watches. "They're gonna regret this."

"Because...because they're not going to make more money, one."

"They're going to make more money," I say.

"Well, they're not going to make as much money as they could."

"They're going to make more money."

"Well, okay. How about this: they're gonna get killed in the SEC."

"Probably. That could take a while."

"And what about the other sports? Is volleyball gonna fly all that way to play someone like, hell, I dunno, South Carolina?"

"Football will pay for it, but yes."

"They're gonna have to rewrite all their songs." He nodded with the confidence of a district attorney pulling a cleanly fingerprinted gun from ziploc bag at trial. "Every last one of them."

Three decks sway as the Aggie War Hymn fades out. My guide, a Texas fan raised in an Aggie family, points. "Here they go, here they go." Maybe it's the end of the rivalry bleeding a bit of sentiment into the equation, but every Texas fan today has urged me to see something. "Oh, you have to see the Corps march in," or "Stay for the band," or "Watch the male cheerleaders.*" Longhorn fans hold Aggie arcana at arm's length, but there is something like respect or wonder in the mockery. These are deranged cousins, but they are something like family.

*Texas fans will not call them by their name, "Yell Leaders." Texas A&M fans, in return, will not call the University of Texas by its name, and instead refer to it as texas university. The lower case letters are intentional.

The crowd heaves back and forth laterally, booming away as they sway.

Yell Leaders coordinate the crowd with a native semaphore so complicated it requires mass rehearsals. Their white uniforms sort of resemble cadets' unis, but not knowing that a stranger might also believe they were lost workers from a dairy for the deaf. The band plays no extraneous music: there is "The Aggie War Hymn," and "Farmers Fight," and other songs from the Aggie repertoire. Party Rock is not in the house at Texas A&M, though there is a Jumbotron that slyly laces advertising and donor tributes throughout the entire presentation. (The official sausage of the Aggies: Slovacek Sausage, with the motto "You're going to love our sausage." Stop giggling.)

The game experience is unlike anything else in college football: coordinated, regimented, and disciplined to a degree one might not think college football should ever be. It is one part North Korean pep rally, one part Fenerbahçe match, and several dashes of English Premiere League singalong.  Moving in unison after an Aggie touchdown, it might for a second feel like you have landed thirty years in the past in a state where football was the national religion, and a giant race of malicious, aristocratic animatronic cattle was the perpetually hated national villain. 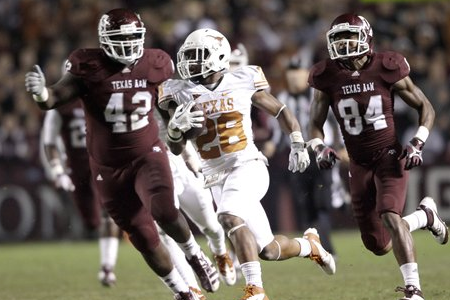 "AND THERE IT IS. THERE'S THE TEAM WE'VE SEEN ALL YEAR."

The men behind groan. After hopping to an early lead, Texas A&M 2011 is busy doing what it does best: unraveling. Ryan Tannehill will throw a pick, and another, and another as Mike Sherman blindly calls pass after pass after pass. Texas strings together the discount upset plan of plays. A trick play nets them a touchdown, a pick six gets them another, and then stringing together turnovers, field goals, and punt returns for field position overturns a 16-7 Aggie halftime lead.

Texas A&M perfected the art of losing games in 2011. They lost games in the first half, and then in the second half, and then in overtime. They lost because their defense could not hold, and lost because their offense imploded, and even lost because of special teams errors. This, however, would be the worst. Tannehill threw a late TD to take the lead, and then watched as Case McCoy, feeble and lost all night at QB for Texas, executed what may be the most clueless stumble ever through the loose A&M defense for a long gain, putting the Longhorns into field position.

The kick would be good, and Texas left the field for what is most likely a temporary forever. The silence afterwards was pure quease. Every fight song will have to be rewritten. Hatreds will have to be redirected, split, and recalibrated. I have a conversation with my Texas buddy about this, and in the middle (to illustrate a point I've forgotten) do a short dance. It's like a little shimmy, and in no way connected to the game we just watched, but I can't really tell that to the angry, ballcap-wearing dude yelling at me now.

"At least we ain't pieces of snob-ass shit like you."

I yell back, "I'm not even involved here," but that's not right and I know it. I am involved here. This is the awkward part of divorce when a third party is involved. You have to meet the family, and even then they're still coming with all this baggage, this anger, this whole other life trailing them like so much toilet paper stuck to a shoe. The man's wife -- carrying their infant in a sling -- is trying politely to pull the man away, but he's "F--- you"-ing, and yelling, and finally walking away backwards with both fingers in the air. He flashes them several times at a distance just to make sure we know how much he cares.

My friend from Texas turns to me. "They're yours now. What do you think?"

"I think they'll fit right in," I say, and then walk down on the field to bathe in the lights of a strange and empty church.