Chris Fowler and Kirk Herbstreit were still in the booth on Saturday night following Oklahoma State's thrilling win over Kansas State. After a barrage of scores late in the fourth quarter, the Cowboys came out on the other side still alive, and still in the BCS race. It all came down to a pass that fell incomplete in the end zone as time expired, giving Oklahoma State a 52-45 win.

But the drama was far from over. Shortly after the game, the area felt the force of a 5.2 earthquake, centered some 45 miles from Oklahoma City. The magnitude was large enough that it was felt in the stadium, and certainly was felt in the booth. In fact, the following photo of Herbstreit captures the moment perfectly. 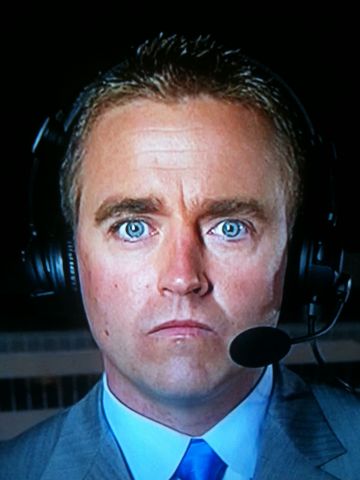 Via our own Bill C, who adds:

By the way, to Herbie's undying credit, he let Fowler finish his question before responding with "Um, I think we just had a quake."

Consummate professional. What a night in Stillwater.