Hopefully, those responsible for Penn State's inability to report Jerry Sandusky's alleged sexual abuses will be gone from the program. And when that happens, its fans will have full license to return to the team they love.

Share All sharing options for: How Penn State Fans Can Remain Fans Despite The Sexual Abuse Scandal

If former Penn State assistant coach Jerry Sandusky had sexually abused those children unbeknownst to anyone else, that is terrible enough. That those high up the ladder, including the head of the athletic department, did nothing with information that me and you and any concerned adult would immediately report to the authorities? That terrifies me.

What these kids have allegedly experienced is worse than rape, it's rape followed by feelings of guilt and shame and sorrow that are unmitigated by the therapy and assistance that could have been of service, had the abuses been reported. If the reports are accurate, Sandusky is culpable for the former, and those in the Penn State program with knowledge of the situation are responsible for the latter.

If these allegations against Tim Curley (Penn State's athletic director) and Schultz (the school's senior vice president) are true, they are monsters. Depending on how the facts shake out, head coach Joe Paterno may have been oblivious, or he may have been selfish and willfully ignorant. These are not things said about good people.

Curley and Schultz have now left the program, and it sounds as though Paterno will be gone in the near future. Likely, and hopefully, the school will shed itself of everyone responsible to one degree or another, and Penn State fans will be left to choose whether to continue rooting for a team with a history riddled with evil actions and inactions. 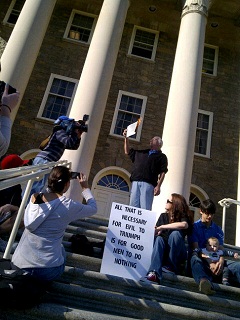 This alumnus, seen here burning his diploma, has evidently chosen not to. And good for him. It is, I'm sure, a decision borne of personal conviction.

I suggest, though, that if those responsible are ousted from the program, a Penn State fan can remain a Penn State fan without guilt. If any of them remain, it becomes an issue of whether you want to support, monetarily or otherwise, an institution that harbors them (I doubt that you do).

But if they are gone, this football team and those people exist in different universes. This is not an appeal for you to understand that Some Things Are Bigger Than Sports or that This Puts Things In Perspective, not only because we all know this, but because the mere insinuation that this is even a point of debate insults everyone.

What I am saying is that this conflict is imaginary, or, at least, should be imaginary. Introduce something as morally urgent as what we have here to an issue of sports fandom, and the latter issue immediately snaps and crumbles under the weight of it.

And even in saying this I don't mean to discount the importance of sports. Sports are important because they make us happy, full stop, rationale and justification unnecessary. This is another compelling reason to keep these universes separate: not only are they are incompatible, but they cannot co-exist without one completely de-valuing the importance of the other.

Disengage your interest in sports from the motor of the human experience. Leave it on the work bench, and when you start it, start it of its own accord.

A friend of mine once said that the best favor one can do for one's self is to learn how to separate an admired work of art, or science, or what have you, from the personality who created it. Divorce the creator from the created. If you can do that, you can appreciate the Crippler Crossface without appreciating Chris Benoit, the person, and you can appreciate Phil Spector's hand in the Beatles' Let It Be without appreciating the man himself.

If you are a Penn State fan, once those culpable are removed from the program, you are morally liberated to root as you always did. Let them be as much a part of you as you'd like. The evils we've had to digest in recent days will be miles away, because they can only come as close as you allow.