As News-press.com's Craig Handel reports, the four players were featured on a Christmas party flyer for Fort Myers restaurant The Firepit Grill. This is against one or another NCAA regulations, as college athletes can't be used to sell things besides expensive football game tickets and Sugar Bowl tickets. There's some stuff about who tweeted what and who doesn't have a Twitter and some cease-and-desist letters going around, and ultimately the party people (PARTY PEOPLE!) took the players' names off the image.

Little should come of this, though the NCAA is involved, so we'll see you in 2016, Mr. Watkins, and your freshman year was quite entertaining.

Here's the promo, by the way, which for some baffling reason lists the more famous Watkins last. Now THERE'S a violation, if you ask me: 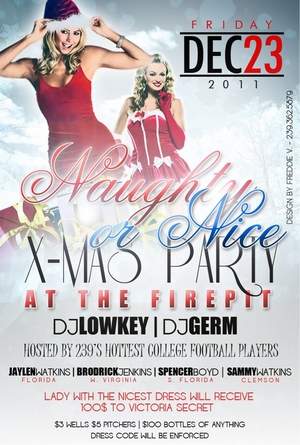 For more on Watkins and probably not much on parties, visit Clemson Tigers blog Shakin' the Southland.