Share All sharing options for: Alabama Stands Alone For Sanity And Reason

The BCS is one of the most successful events in the history of college football. I know this because I read their website, and if it is on the internet, it must be true. If you don't believe this, you can "check your facts," another thing I saw someone say on the internet to an argument they did not like. The internet is great at rhetorical flourishes like this, along with pictures of dogs bathing and informative arguments about religion.

It's a shame that so many people do not think the BCS works, but there is one place that has not forsaken sanity, reason, and the rule of logic. It's after the jump, but when you see it, you will not be surprised. 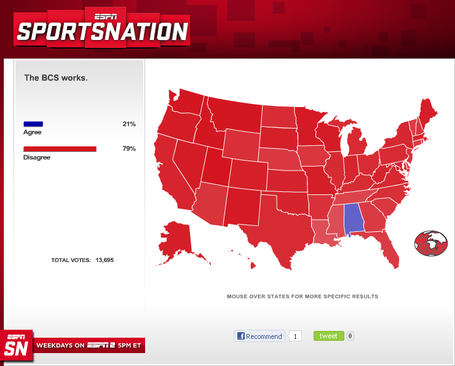 As always, Alabama must take the rest of the country by the nose and lead it to the future. It's not easy taking the unpopular stand, especially when it benefits you in no way whatsoever, but the Yellowhammer State has never been about what's right for them. It's about what's right for America, and if you don't understand that there's a frozen moose parlor called Canada you might wanna look into, buddy.* (Via.)

*This has nothing to do with Alabama getting a rematch against LSU in the BCS. Hush, you.