Georgia Vs. LSU, SEC Championship 2011: Can The Dawgs Actually Win?

Can a strong Georgia squad pull a shocking win over No. 1 LSU? Probably not, but in limiting big plays and minimizing wounds on special teams, they will give themselves a chance.

Share All sharing options for: Georgia Vs. LSU, SEC Championship 2011: Can The Dawgs Actually Win?

Last week around this time, I wrote a piece titled "Arkansas Vs. LSU: Can The Razorbacks Actually Win?" The answer was basically, "No, but they stand a better chance now than in September." Is the answer any different when we substitute Georgia for Arkansas? Only two things even possibly stand between the country and an LSU-Alabama rematch: a Georgia win and an Oklahoma State blowout of Oklahoma. (And even if both of those things happen, there's a decent chance we still get LSU-Alabama.) Can the Dawgs add some extra chaos to a pretty fun few final weeks?

As with Arkansas, the short answer is no. But who wants short answers? Here are some general impressions worth discussing.

1. Georgia Has Been Good All Season

It is easy to assume that Georgia wasn't a very good team when they began the season 0-2, then they improved as they knocked off a relatively weak final 10 games of the season. This is not necessarily true. They ran into a buzzsaw in week one against Boise State (perhaps nobody in the country would have beaten the Broncos that day), and they encountered a healthy amount of bad luck in losing to South Carolina the next week. The signs were there from the start -- if chemistry and effort were not damaged by the poor start, the wins were going to roll in. 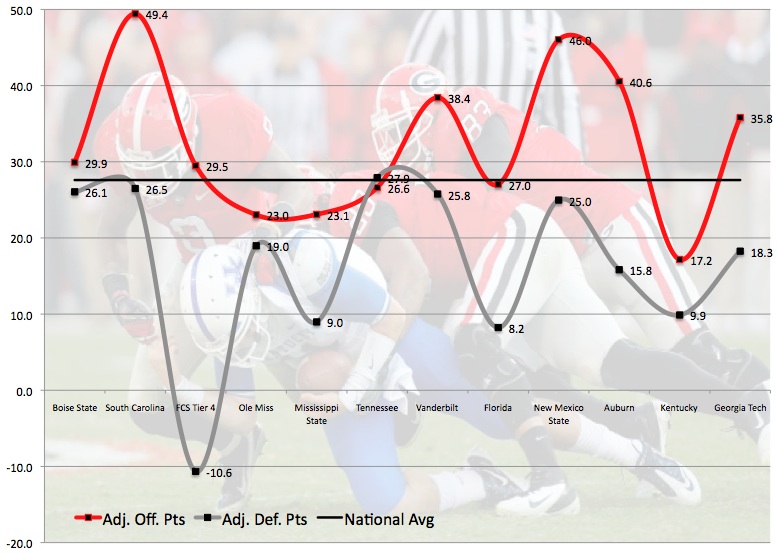 The goal of Adj. Points is to determine how a team would have performed against a perfectly average opponent, and the graph above shows that the Dawgs would have gone 11-1 if playing said average opponent each week. Their propensity for sitting on the ball in the second half (once they had built a decent lead) held them down a bit, especially in the middle portion of the season (Ole Miss, Mississippi State, Tennessee), but both the offense and defense have spent most of their season on the healthy side of national averages.

Of course, LSU has still been better. But we already knew that. 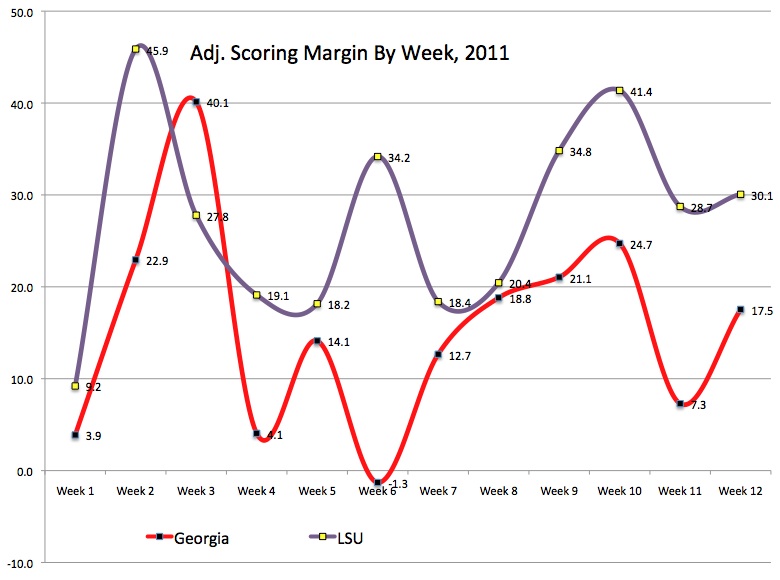 2. Three Yards At A Time

Both Georgia's and LSU's defenses have been simply masterful at preventing big plays. LSU ranks first in Def. PPP+ (an explosiveness measure), but Georgia is not far behind in fourth. With the play of LSU's incredibly deep secondary (led by Tyrann Mathieu, Morris Claiborne and Ron Brooks) and Georgia's underrated linebackers (Jarvis Jones, Michael Gilliard), you must grind out scoring drives against each team, and they will only allow you to do that once or twice per game.

LSU has allowed just 12 touchdown drives in 12 games, which is astounding in and of itself. More astounding: only three of those drives lasted fewer than 10 plays (West Virginia scored on drives of five plays and 90 yards and six plays and 80 yards, while Florida scored on a one-play, 65-yard drive). Oregon scored three touchdowns, but it took them 11, 13 and 19 plays. They have allowed only four touchdown drives in the last six games, and none lasted fewer than 10 plays. Basically, you can drive on LSU, but only once, and it's going to take you a while. Can Georgia play efficient, mistake-free offense and maintain drives? And can they do so without being able to run the ball? Georgia ranks 43rd in Off. Success Rate+ (an efficiency measure) -- 108th rushing (which makes sense considering how injuries have wrecked the running backs unit recently) and third passing.

The Georgia defense has been almost as effective in this regard, but not quite. They have allowed just 22 touchdown drives (an impressive total when gauged against almost anybody other than LSU), 12 of which have lasted fewer than eight plays; one of those drives was a six-play, 27-yard drive for Kentucky, which almost doesn't count because of where the drive began. LSU has shown a willingness to grind out long drives themselves, and it will be interesting to see how successful they are in doing so. In the second year of Todd Grantham's 3-4 defense, the Dawgs have proven to be both strong and fast, and they are 10th in the country in Def. Rushing S&P+. If they can slow down the LSU run early in downs and make the Tigers pass on third down to continue drives, they could stay in this game for quite a while.

In this morning's Tailgate Mailbag, I referenced how solid and underrated LSU's offense has been this season. We haven't noticed, in part because so many teams are done in simply by LSU's defense and special teams. If the Bayou Bengals gained just 200 yards of offense, it would have been enough to win quite a few games this year. (In fact, they beat the No. 2 team in the country while gaining just 239.)

While the LSU defense has clearly been fantastic, special teams have been an almost equal piece of the equation. Punter Brad Wing pins you deep (21 of 42 punts were downed inside the 20, but he is inexplicably not a finalist for the Ray Guy Award) and forces you attempt (and fail) to drive the length of the field. Kicker Drew Alleman makes sure LSU gets points every time they get the opportunity (he has made 16 of 17 field goals under 50 yards). James Hairston averages 65.4 yards per kickoff. Tyrann Mathieu averages 13.7 yards per punt return (he turned last week's Arkansas game with a 92-yard touchdown). Morris Claiborne averages 27.5 yards per kick return (he has scored one touchdown). The Tigers allow fewer than 20 yards per kickoff return (30th in the country) and just 0.5 yards per punt return (second) on the rare occasion that a punt isn't downed or fair caught. They are indomitable in special teams.

Georgia, meanwhile, has been average at best. Whereas LSU has bounced around the Top Five all season in Special Teams F/+ (they are currently third), Georgia is currently 72nd. The Dawgs are 112th in opponents' punt returns, 100th in opponents' kick returns. Brandon Boykin and Branden Smith have combined to average a decent-not-great 8.8 yards per punt return; similarly, Boykin has averaged 23.6 yards per kick return. Drew Butler has been solid in the punting department (he averages 43.0 yards per punt and has landed 16 of 43 kicks inside the 20), but thanks to poor coverage, the Dawgs are just 100th in Net Punting. Meanwhile, kicker Blair Walsh has made just 18 of 29 field goals and has missed four of under 40 yards (13-for-17). Georgia's special teams unit is not terrible, but it isn't great. If they can hold their own with LSU in this regard -- preventing long returns, making their kicks, etc. -- then they will have cleared a major hurdle.

The official F/+ projection for this game is LSU by 19.1 points, a decent amount higher than the current 13.5-point spread. Georgia may rank 13th overall in F/+, but LSU is just that far ahead of everybody else. Georgia's margin for error is small, but if they can neutralize the Tigers' special teams advantage and prevent big plays as well as LSU will, then they could grind out a tight, low-scoring game. Georgia has been a very good team this season -- better than even some Georgia fans probably think -- but LSU is really, really good; there's a reason they are favored to win by so much, and there's a reason why they are an easy No. 1 in the country.