Sleepy, moist Shreveport saw the North Carolina Tar Heels take the ball on the opening kick of the 2011 Independence Bowl and score first blood. Dwight Jones (WHO? DWIGHT JONES), he who was briefly ineligible for this game, brought down a pair of passes along the way, including the 22-yarder over the head of his unlucky defender for the touchdown.

The Missouri Tigers retorted promptly, with a 40-yard touchdown on a double pass from receiver T.J. Moe to a wide-open Wes Kemp. It's 7-7, to be clear.

The game temperature is in the 40s, with near-perfect 100 percent humidity. Attendance is bleak. Sometimes you wonder whether the Indy Bowl is actually put on by AdvoCare at all. Maybe it's really operated by a neighboring rival city that just wants to make Shreveport look worse than it really is. Like a Bossier City, perhaps? 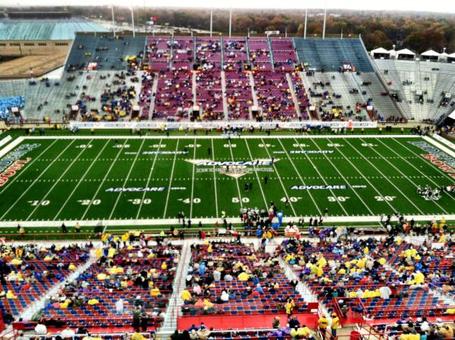 UNC looks set to hit the skies until Mizzou does something about it, rushing for only two yards as Bryn Renner's arm did all the rest.