Oregon's Nike Uniforms For 2012 Rose Bowl Are From Outer Space

Share All sharing options for: Oregon's Nike Uniforms For 2012 Rose Bowl Are From Outer Space

Given the history, this year's new Nike look isn't even that outlandish. On a scale of 1-10--one being Penn State, 10 being the Under Armour apocalypse--Oregon's look this year falls somewhere barely cracks a five. But they do score extra points for channeling the spirit of Darth Vader.

Here's what Oregon will wear vs. Wisconsin in the Rose Bowl this year: 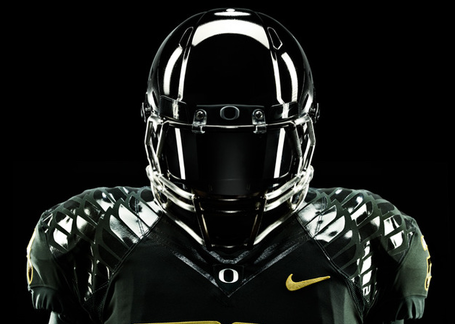 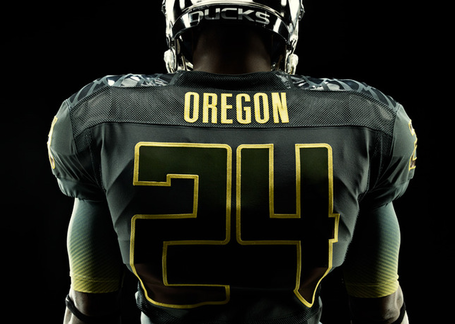 And I don't know if these giant fly wings are hidden in the back there, but if so, that's gotta be some kind of rulebook violation: 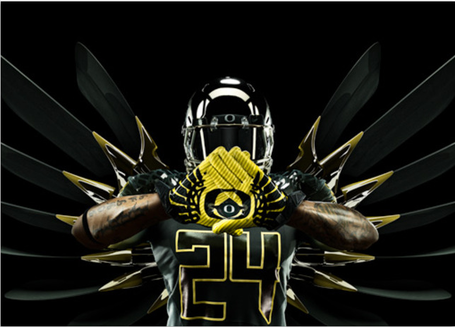 You can see more photos in this gallery over at Nike, and you can read more on Oregon's relationship with Nike in my feature from Eugene last month. As Ducks officials told me in November, every incoming freshman class gets to help design a Nike uniform, usually worn their senior year. They roll them out early, though, in time for bowl season, just in case players go pro. So basically, Oregon's football program is a thousand times cooler than yours.

But hey, Wisconsin added roses to their jerseys!