The Nebraska assistant coaching shuffle that coincided with National Signing Day is already seeing some fallout, at least from a PR standpoint. If you missed it on Wednesday, check out this lovely exchange from Bo Pelini's press conference, one ostensibly set up to tout his best signing class as a head coach:

Chatelain: "Is Marvin Sanders still on your staff?"

Pelini: "I've already said I'm not talking about anything but recruiting today. I'll address any staff questions at another time."

Chatelain: "Have you notified any recruits of staff changes..."

Pelini: "Have I notified any recruits? No, because we really haven't had any staff changes up to this point."

That was Wednesday. Thursday, Sanders' departure was announced. Charles Jackson, a cornerback signed to Nebraska's 2011 recruiting class, found out via a total stranger on Facebook that Sanders, in fact, wouldn't be his position coach. This went over about as well as you'd think it would:

Thursday afternoon, Nebraska made Sanders' departure official. Thursday night at 8, Jackson still hadn't heard from Sanders, Bo Pelini or anyone else at Nebraska.

"I think they should've told me before I signed," Jackson said. "I didn't have any idea. They broke the guy code."
[...]
Jackson hadn't spoken to Sanders in about three weeks, but Sanders talked to Jackson's dad "about two days ago," Charles said.

Sanders said nothing about leaving. Neither did anyone else from Nebraska.

We will conclude this post with an artist's representation of what we imagine Bo Pelini thinks of your "codes": 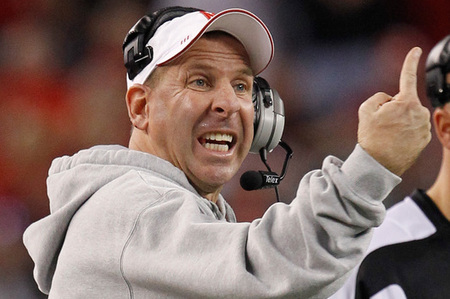