The Coaching Graveyard And The Duke Blue Devils

David Cutcliffe is a brave man for taking over a program that hasn't won big since the 1950s, and he's done an admirable job thus far. Can the tiny, incremental improvement continue in 2011?

Share All sharing options for: The Coaching Graveyard And The Duke Blue Devils

Growing up, I didn't understand why a coach would want to take, say, the Alabama job over the Duke job. People have already won at Alabama, so why not win somewhere new? Every job is equal, right? And why would Steve Spurrier leave Duke for Florida, anyway? (Even at a young age, I had some stellar pro-underdog, liberal guilt going on.)

Now that I'm a little older, I understand the concept of the resume killer. In 2002, Ted Roof was a reasonably successful defensive coordinator; by 2007, he was a failed head coach. In 1999, Carl Franks was a reliable, long-time Steve Spurrier assistant; by 2003, he was a failed head coach. Fred Goldsmith? Same thing. In 1992, he was Sports Illustrated's national coach of the year at Rice. In 1996, he went 0-11 in Durham.

A great coach can win -- and potentially win big -- at a resume-killing job; a good one probably can't. David Cutcliffe likely isn't a great coach, but he's certainly a brave one. He left a seemingly comfortable post as Tennessee offensive coordinator to take over a program that has won seven or more games in a season three times since the Beatles came to America and has won either zero or one games five times since Y2K. And you know what? He's done a downright stellar job in his three years there.

The middle part of the last decade was really, really bad, even for Duke. Take a look at the table at the bottom of this post. The Blue Devils have actually improved their on-field product, at least slightly, in four of the last five seasons. Their lone year of regression was not severe. And yet, they went 3-9 and ranked 80th in overall F/+* last season. That's measurable improvement for the Blue Devils. And in a world where bowl bids are as plentiful as Duke-UNC basketball promos on ESPN in February, it is not inconceivable that Cutcliffe could deliver just that one day. If Vanderbilt and Indiana can do it, so can Duke, right? As long as you define success as "random Humanitarian Bowl bid," then Cutcliffe is well on his way to finding considerable success in the Research Triangle...

In Cutcliffe's three seasons, Duke has already won almost as many games (12) as Carl Franks and Ted Roof combined for between 1999-2007 (13). Despite falling from five wins to three in 2010, Duke potentially got even closer to actually being a good team. The passing game was efficient, and the defense was better, if still far below average. (For what it's worth, they were above-average in the middle-third of the season, very much below average the rest of the way.) Duke won at Navy and actually had a passing shot at six wins, standing at 3-6 with three winnable games to close the season. Alas, they lost tight ones to Boston College and North Carolina, and that was that.

The main problem for Cutcliffe's Blue Devils overall is they've been just competitive enough to lose close games. They're 4-9 in games decided by a touchdown or less in the last three years; a .500ish record in those games brings Cutcliffe an extra win per season. 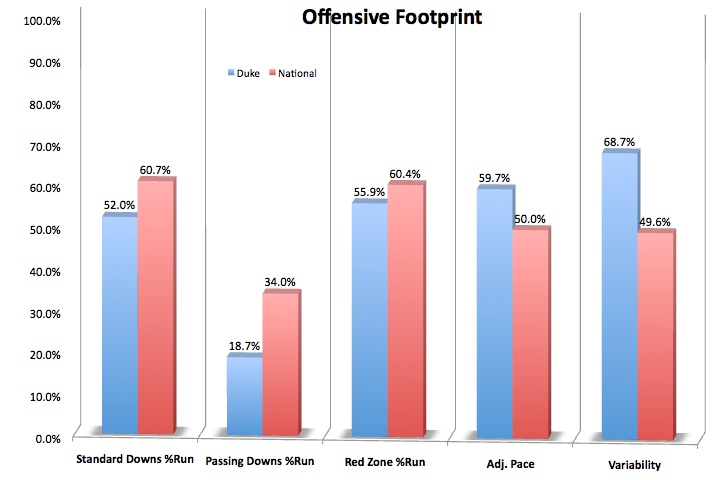 Of course, indications are that the starters, Renfree in particular, did just fine. Perhaps the depth chart gambit helped to motivate the starters more than build depth. We'll see.

All we know is, Cutcliffe is a quarterbacks coach, and this is a quarterback's offense. Duke was 50-50 between the run and pass on standard downs, and they were nearly all-pass on passing downs. Though completely lacking in big-play threats, Renfree found a solid connection with efficient receivers Vernon and Varner; Vernon is particularly impressive -- you will rarely find a receiver catching over 70 percent of his passes and still averaging over 13 yards per catch. He wasn't a big, big-play threat, but he's a nice weapon, and he pulled down second-team all-conference honors last season. 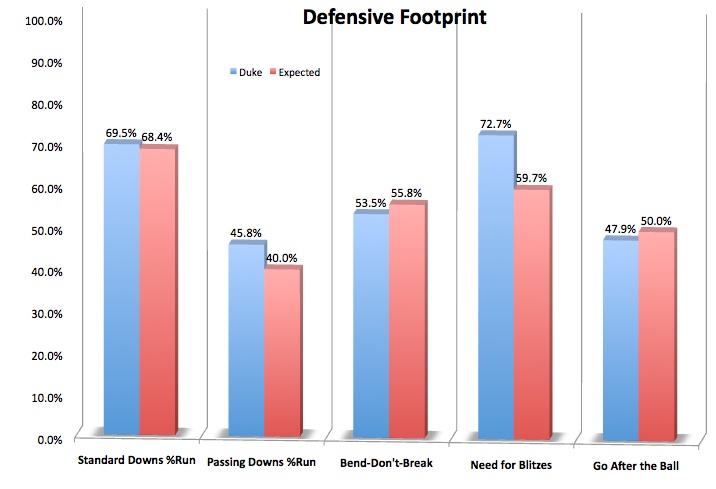 To their credit, Duke's defense has improved incrementally in each of Cutcliffe's three seasons at Duke. To their detriment, they obviously still have a long way to go. They couldn't hurry a quarterback to save their lives (they had 12 sacks for the entire season, the same number as Marshall's Vinny Curry and three fewer than Clemson's Da'Quan Bowers), and as a consequence, their pass defense numbers were terrible, offsetting an at least mediocre run defense. They were decent at leveraging teams into passing downs, and they were absolutely brilliant at letting teams off the hook. They gave up a ton of plays despite a formation -- 4-2-5 -- designed to increase speed and prevent such big plays.

The pass rush was a focus of spring practice, for obvious reasons. Ends Patrick Egboh and Wesley Oglesby, who combined for 11 TFL/sacks on a defense starving for such plays, are both gone. In their place are a smorgasbord of young, likely undersized talent. There's 220-pound redshirt freshman Jordan DeWalt-Ondijo, who had a lovely spring ... 235-pound Justin Foxx ... 230-pound Dezmond Johnson ... 245-pound Jamal Wallace. The run defense will not benefit from having these players on the field, but sacrificing some standard downs success for the occasional sack probably wouldn't be a bad idea.

If the pass rush is better -- which is far from guaranteed -- the secondary might not be a disaster. Cornerback Ross Cockrell (48.5 tackles, 3 INT, 7 PBU) returns, as do all sorts of safeties. Matt Daniels (69.5 tackles, 6.0 TFL/sacks, 3 FF, 2 FR, 1 INT, 7 PBU) is the best play-maker of the bunch, though three others registered at least 20 tackles last year. In fact, if the pass rush still stinks, I suggest a move to a 2-2-7 formation with this amount of safety experience. I mean, why not? Call it the Jackée formation, and you're all set!

We're in a Pat McGee Band mood this morning, so ... "Can't Miss What You Never Had"? No, that's mean. "Maybe It's Time"? Love that song, but no, it's not time. We'll be motivational this lovely morning and just go with "Don't Give Up." 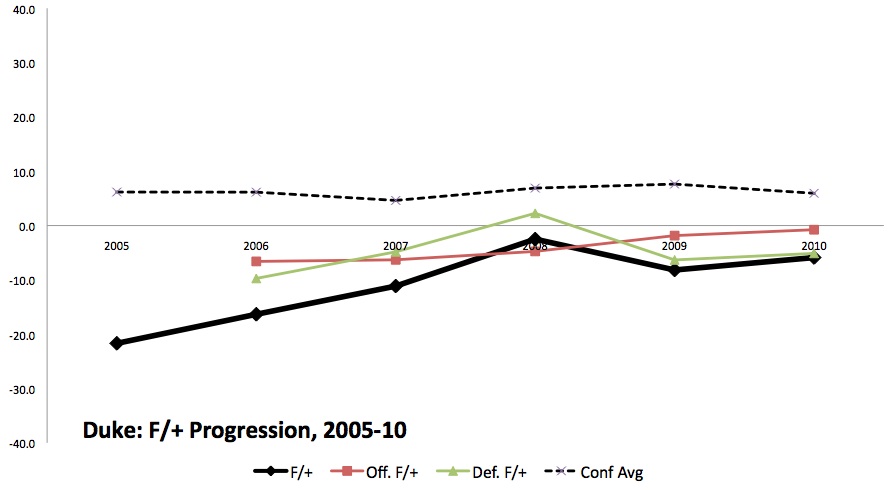 Again, I ask ... are you an optimist or a pessimist? Both have material when it comes to Duke. Good news: the Duke defense has improved every season, the Blue Devils return a healthy number of starters, the turnover margin was, in theory, unsustainably bad in 2010, and Duke's YPP margin suggests they were rather unlucky. All good things! Of course...

...the turnover margin could be sustainably bad if the defense doesn't learn how to force some turnovers, the recruiting has trended in the wrong direction in the last couple of classes, Duke still can't win close games, and ... if you're the type to never bet against a trend, then "zero bowls in the last 16 seasons, two in the last 50" is a pretty strong one. The ACC's Coastal Division is not necessarily the most difficult place to build a six-win team -- Virginia still has work to do, and obviously Miami, Georgia Tech and North Carolina didn't light the world ablaze last season -- but Duke probably still isn't there, especially considering they face Miami, Virginia and North Carolina on the road in 2011. (Hosting Stanford and traveling to Florida International in non-conference play is also quite a chore.)

David Cutcliffe's performance in Durham has thus far been quite admirable. If Duke can keep making slight improvement this season, then the experience and depth that he has been building on offense could lead the way to a decent run in 2012. But probably not before then.

* F/+ rankings are the official rankings for the college portion of Football Outsiders. They combine my own S&P+ rankings (based on play-by-play data) with Brian Fremeau's drives-based FEI rankings.

** For more on the 'Adj. Score' and 'Adj. Record' measures below, feel free to read this Football Outsiders column. Adj. Score is a look at how a team would have performed in a given week if playing a perfectly average team, with a somewhat average number of breaks and turnovers. The idea for the measure is simple: what if everybody in the country played exactly the same opponent every single week? Who would have done the best? It is an attempt to look at offensive and defensive consistency without getting sidetracked by easy or difficult schedules. And yes, with adjusted score you can allow a negative number of points, which is strangely satisfying.