College Football Spring Practice Is Over: Some Things We Think We Learned

Spring practice never really tells you that much, but Spencer Hall tries to tease what he can out of depth charts, reports, and the most reliable source of all: completely making things up as he goes.

Share All sharing options for: College Football Spring Practice Is Over: Some Things We Think We Learned

Jim Tressel is gone at Ohio State when he says so. This ain't his first rodeo, folks. His first rodeo was in Paducah, Kentucky in 1978, and he strangled a horse to death with his bare hands just to show everyone he was serious. A grainy Betamax tape of this very incident was all Tressel handed Ohio State as his resume when he first interviewed for the job. Witnesses described the committee as "beyond impressed," and his performance as "Woody Hayes-esque."

Washington's Nick Montana lost out to Keith Price in the Huskies' QB battle, and the logical explanation is Joe Montana's insistence that his son wear foot-destroying Skechers Shape-Up shoes during his reps on the practice field. (His calves look great, though.)

Andrew Luck showed up for spring practice wearing a body condom made of bubble wrap in order to prevent an injury jeopardizing his prospects of an NFL career after coming back to Stanford for his senior year. This backfired, however, as Stanford's defense pursued him relentlessly in their spring scrimmage craving nothing more than the sweet, addictive pop of plastic air bubbles between their fingers.

We still await the first QB to attempt to work out in Vibrams Five-Fingers. (Hint: It's going to be this man, if he hasn't done it already.)

Turner Gill came out of spring focusing on what he called "the intangibles." This refers to his football team, so it really is an appropriate focus for him since he is the coach of the Kansas football team. Did you just imagine Turner Gill blowing his whistle and coaching no one on an empty field with great enthusiasm and hand-clapping? I did, and it is a fantastic visual.

If Joe Bauserman goes undefeated as Ohio State's starter in the first six games of the 2011 season, expect a large portion of the Ohio State fanbase to clamor for him to keep the starting job. Then expect the remaining Buckeye fans to remind then that Joe Bauserman sets off airport metal detectors because he has an artificial hip. "SO DO WE," they will respond, and then we will all watch in delight as the debate rages deep into October.

Tennessee's Tyler Bray has been given the following offseason plan by his offensive coordinator Jim Chaney:

"Throw with these wide receivers until his arm falls off," offensive coordinator Jim Chaney said, "and lift weights and eat. That’s it."

Note to Tyler Bray: DO NOT EAT FALLEN-OFF ARM. This may seem unnecessary, but if you have to include "eat" on the agenda, then "do not eat arm that you threw off" should probably be on there, too.

Florida's John Brantley is now overthrowing receivers with confidence. Penn State's Matt McGloin, however, is now throwing interceptions with verve. If we combined the two we'd have a vivacious Juggs machine capable of throwing what we believe is called "a completion." This "completion" is only theoretical, but we're sure it can happen sometime within the next 7-9 months for one or both of these quarterbacks.

Vanderbilt has seven people who could be considered quarterbacks on their roster. There is no joke but the truth here. (The clown car backfield: make this formation happen, Vanderbilt coaching staff! Also, this problem would solve itself if they were all Forciers, and thus destined to all transfer at once looking for a starting job.)

Mack Brown was hospitalized when he passed out watching Garrett Gilbert complete a pass located several yards downfield in spring practice, but avoided injury by falling onto Dan Beebe, Big 12 commissioner and Brown manservant. "I'm happy to be concussed in the name of helping Mr. Brown anytime," said Mr. Beebe, who lives in a spacious shed located behind Brown's house and is at his side 24/7. "A concussion is a small price to pay to be in the company of Coach Brown," who was given a lollipop and a gift certificate to Vince Young's Steakhouse in exchange for his sacrifice.

Georgia's Mark Richt hates Georgia football, and will spend this entire season trying to get himself fired. This will all be doubly funny when he is Costanza'd and wins 10 games with a BCS berth. You know this is fact waiting to happen.

Indiana's Kevin Wilson is pretty excited to coach Indiana football, and that is because he has never coached Indiana football. Does he know what it does to people? Formerly handsome young rakes like Bill Lynch? 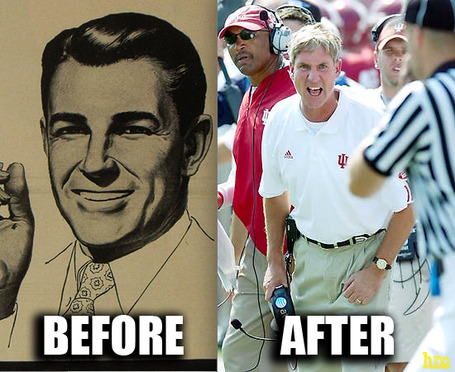 Brady Hoke has already pleased Michigan players by doing what Michigan Men do, and what Rich Rodriguez never did: looking people right in the eye when he's talking to them. It gets a little intense when he's doing it an inch away from your face while you're showering, but that's the way Bo did it, too.

A bag of human hands was discovered on a rural highway just outside of New Orleans in January, and once they were identified as belonging to the Arkansas wide receiving corps and reattached, the Razorbacks enjoyed a productive and fruitful spring practice.

I have no Bill Stewart jokes, because the thought of him whittling little wooden Indians in his office all day is just heartbreaking. It's especially heartbreaking when I imagine Dana Holgorsen playing chess with them, and Bill saying "That's the durndest game of checkers I ever seen in my life, youngster."

As they have been for the past three years, Bo and Carl Pelini are wearing their letterman's jackets and cracking their knuckles in the parking lot just waiting for you to come out and get yours, pencilneck. However, If you want to foil their plans just stand on the painted side of goal line and ask them to cross it. You'll be safe forever.

Russell Wilson was told not to return to NC State due to his lack of commitment to football, which is ironically going to be the same phrase Tom O'Brien will hear when he is fired for chasing players like Russell Wilson away from NC State.

Tommy Tuberville made news by declaring himself a birther on Fox News. Predictably enough he defended his argument very well, but made no substantial points while punting on questions he did not want to answer.

Jordan Jefferson still appears to be atop LSU's depth chart at quarterback. Meanwhile, Josh Smith of the Hawks takes the ball in the paint, hears the crowd yelling "NOOOOOOO," and watching from his couch Jefferson thinks, "I love your game, J-Smith. I really do."*

*Last season we watched as an entire section of LSU fans openly root for his injury or benching, whichever came first. If he were a submarine, he would be The Hunt for Red OctNOber. His favorite month is NOvember, and his favorite weepy movie is The NOtebook.  His Facebook status is NO even when he types other things in, his favorite director is Christopher NOlan, and he'd love to work in the NO-huddle but the irony is too much even for him. I don't know if a fanbase has ever openly rolled in their antipathy towards a longtime starter like LSU does for Jefferson, and that includes Reggie Ball's tenure at Georgia Tech. At this point it's almost his brand.

Boise State played a 1-5-5 defense at one point in their spring game. This is not a joke, and we are not making it up, and is merely a reminder that there are crazy barbarians still roaming the high plains of Idaho whose playbooks would make Jim Tressel's head explode if it weren't already impounded for evidence by the NCAA's CSI team.

The NCAA CSI team being what they are, Jim Tressel's head will undoubtedly go missing, show up in a locker at San Diego State, and result in three years of probation for the Aztecs and zero punishment for Ohio State.