Underdog Redux And The Vanderbilt Commodores

Vanderbilt is the ultimate underdog at the BCS level. Is James Franklin enough of an "underdog tactics" coach to bring success to Nashville? The defense should be stellar, but ... any hope for the offense?

Share All sharing options for: Underdog Redux And The Vanderbilt Commodores

You are never going to out-talent and out-athlete SEC foes, and while you may be able to out-coach them and pull an upset every now and then, then only way to win at Vanderbilt is to be unconventional.  It is a principle we have discussed multiple times at Football Study Hall, and it is the reason why the concept of underdog strategies is so interesting.

[W]hat strategies would be good underdog, high-variance strategies? Here are some possibilities. ...

So those are some options. Interestingly, it could be argued that on offense, the best strategy might be something like the flexbone or another triple-option offense like Paul Johnson uses: it has big play potential (and thus can be a substitute for passing), yet carries the benefit of keeping the clock going, which works against pass-first underdogs.

I used this exact passage in my Summer Vacation discussion of UL-Monroe and their use of such unconventional approaches, and I am reusing it now because ... well ... ladies and gentlemen, the Vanderbilt Commodores, the Louisiana-Monroe Warhawks of BCS conferences!

(Besides, what, did you think I wasn't going to re-blurb over the course of writing 2,500 words each about 120 teams?)

Long ago, (1939, to be exact) Sewanee -- sorry, The University of the South -- saw the writing on the wall and ducked out of their SEC membership.  Vanderbilt persisted despite higher academic standards and lower athletic funding, and they should be admired for that.  But admiration doesn't result in wins.  Bobby Johnson seemingly did everything well in Nashville, putting solid athletes on the field and showing some strong in-game coaching chops, and the reward for his solid efforts was a single bowl bit, the 2008 Music City Bowl in their backyard.  That whole season was something rather special.  ESPN Gameday came to town when they knocked off No. 13 Auburn (before anybody realized, apparently, that Auburn was actually trying to win games without gaining a single positive yard that season), they rose to No. 13 in the polls themselves, they won a bowl ... it was a great step forward.

A year later, they went 2-10 and Johnson retired.

Johnson gameplanned well, his teams executed, his defenses were usually salty, and in eight seasons he went 29-66.  After a year of ridiculously entertaining turkey-inseminator Robbie Caldwell running the show as interim coach, and another 2-10 season, Vandy brings in former Maryland offensive coordinator James Franklin.  Can he raise the program's ceiling, or is it pretty much set at this point?  Can the Commodores not only play unconventional, successful football, but sustain it for more than three months?

Adj. Points tell us a different story than a full-season S&P+ rating does.  Basically, it describes to us how often a team was particularly good or bad, not just how they averaged out over a full 12 games.  Overall, 24 teams finished below Vanderbilt's 96th-ranked offense (according to Off. F/+), but only three were more consistently miserable than the 'Dores.

The national average of points scored (and, therefore, the midpoint of the Adj. Points curve) was 27.1 per game in 2010.  In terms of real points, Vandy reached that benchmark twice; in terms of Adj. Points, once.  And that one solid effort was wasted against Eastern Michigan.  Aside from general inexperience and iffy talent, injuries conspired against Vandy, and that was too much to overcome given the depth of other SEC teams.  The running backs position and both lines were dinged by injuries -- leaving in the wake a ridiculously young offensive line, among other things.  The result was predictable and hard to watch.

Of course, while injuries are bad for the present tense, they're often great for the future tense; thanks in part to injuries, Vandy can claim 11 returning starters on offense ... but they are 11 players who started for a mostly terrible offense.  New blood on both sides of the ball will be required as a supplement to simple experience. 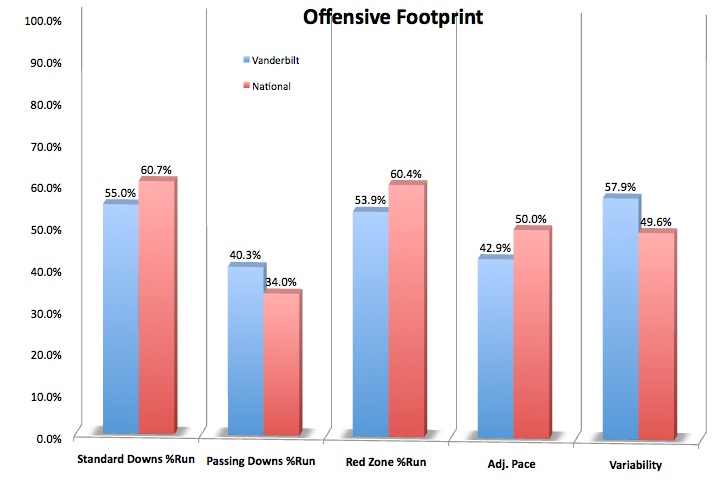 Our friend Year2 at Team Speed Kills pointed out recently that Vanderbilt currently has seven quarterbacks fighting it out on the depth chart, six of whom are on scholarships.  With the performance of last year's quarterbacks -- and the offense as a whole -- one cannot blame James Franklin for attempting to stock up.  Larry Smith is your "returning starter" (in quotes because that designation usually suggests quality but really probably shouldn't here); he completed 47 percent of his passes last year, barely eking over the five-yards-per-pass level (5.1, to be exact).  He is a decent run threat -- minus sacks, he gained 424 yards and managed a +2.4 Adj. POE last year -- but if I were a Vandy fan, I'd have been quietly rooting for one of the six other competing quarterbacks to beat him out.  They did not.  Smith finished the spring the No. 1 man. 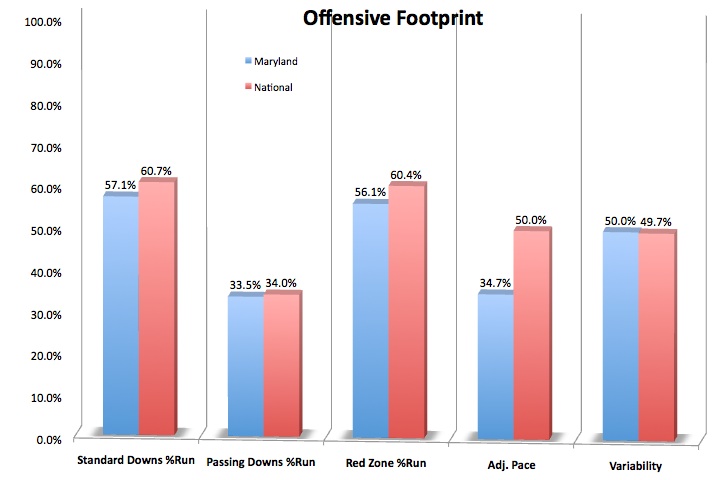 Strangely enough, there are quite a few similarities.  Both teams ran a smidge less than normal on standard downs, passed quite a bit in the redzone, and slowed the tempo down as much as possible.  Maryland took a few more chances on passing downs and played at an even slower pace, but there are as many 'sames' as differences.

So the question now is, is this a good thing?  Or would it be better if Franklin were to shake things up a bit?  Obviously Maryland's offense functioned at a higher level than Vanderbilt's (the Terps ranked 52nd Off. F/+, 39th in Passing S&P+), but was that purely because of coaching or the talent at hand (particularly receiver Torrey Smith and running back Da'Rel Scott)?

I always advocated for Vandy to hire either Mike Leach or Navy coach Ken Niumatalolo because of the uniqueness and underdog favorability of the offenses they run; while acknowledging that both coaches would bring their own set of issues to the table -- Leach obviously doesn't have the best reputation among athletic directors at the moment, and Niumatalolo is a dormant volcano mixed inside a glass case of emotion on the sidelines -- but other than a slow pace, Franklin brings little uniqueness (in terms of personality/footprint) to the table, and for this job, that is a strike against him. 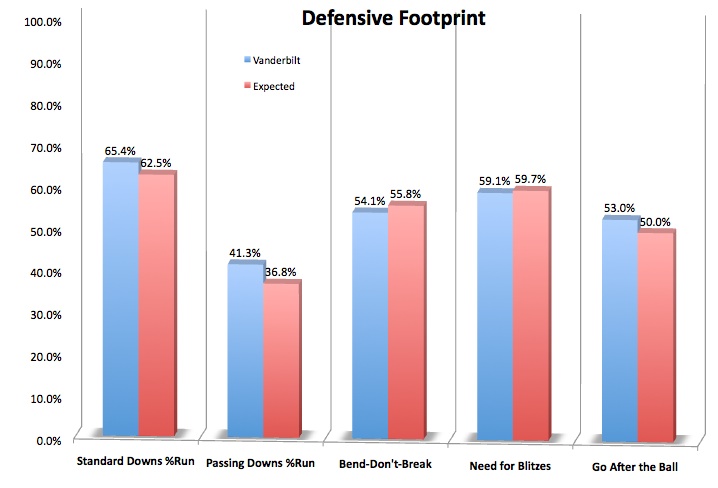 Franklin might not meet many of my "underdog checklist" criteria, but he did make a creative choice for his defensive coordinator.  Instead of recycling an old name (Carl Torbush, anyone?), Franklin went to the FCS ranks and plucked Bob Shoop away from William & Mary.  Focusing on a stout run defense, W&M had one of the better defenses in the country at the FCS level, and he should understand what to do with some decent personnel.

Most of Vanderbilt's problems in recent years came on the offensive side of the ball; the defense has been solid and should continue that way.  The 'Dores were solid on run D, and unlike a lot of less-than-athletic teams, they didn't let opponents off the hook on passing downs, actually getting more effective when leveraging opponents into second- or third-and-long.  The heart of this defense returns, particularly a deep line.  Ends Johnell Thomas, Tim Fugger and (in eight games) Walker May combined for 15.0 TFL/sacks in 2010; Fugger was strangely effective with the strip, forcing four fumbles, one of the higher totals I've come across in these previews.  May appears to have the highest ceiling of the three, waiting a while to get his opportunity but making the most tackles (23.0) and TFL/sacks (6.0).  Three tackles -- Rob Lohr (8.0 TFL/sacks), Colt Nichter and T.J. Greenstone -- have all shown potential, too.

There is solid depth in the secondary as well.  Second-team all-conference cornerback Casey Hayward (64.0 tackles, 2.0 TFL/sacks, 6 INT, 11 PBU) returns, as do cornerback Eddie Foster (6.0 TFL/sacks, 3 PBU) and safeties Sean Richardson (82.0 tackles, 7.0 TFL/sacks, 5 PBU) and Kenny Ladler (48.5 tackles, 5.5 TFL/sacks as a freshman).  With those TFL totals, one can see that last year's coaching staff made up for a lack of pass-rushing ability on the line (they were much better against the run up front) by assaulting the line of scrimmage with defensive backs.

In honor of Robbie Caldwell, how about a little "Jive Turkey" from the ever-underrated Ohio Players? 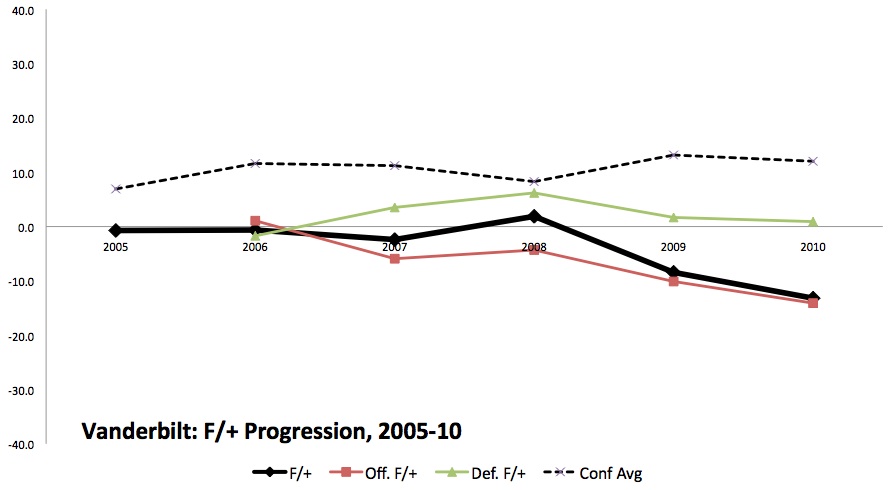 A couple of "turnaround" factors jump off the page -- Vandy returns 19 starters, and their +4.2 YPP margin suggests they were quite unlucky in how efficiently their and their opponents' yards were turned into points.  That's good.  Now the bad: look at how far away they are from the "average" SEC team.  What will decent improvement actually do for them?  Now look at how much worse their turnover margin would have been had they recovered a normal number of fumbles.  I'm optimistic that the Vandy defense will continue to play at an average-or-better level, but I just have no faith that the offense is going to be effective enough to steal a couple of SEC games.

The good news is, the schedule could be a lot worse.  The 'Dores have seven home games -- including likely wins versus Elon and Army and you've-got-a-shot games against Ole Miss, Kentucky and UConn.  Win all of those, and they just need one big upset to steal a bowl bid.  But ... they probably won't win all of those.

With 11 seniors, Franklin has a decent base for building over multiple years if he has the chops and creativity.  Just don't expect much noise in 2011.