The Baylor Bears And The Celebrity Hot Tub Party

There may not be a more likable, enjoyable player in the country than Baylor quarterback Robert Griffin III. The supporting cast on offense is strong, but could he get some defensive help this year?

Share All sharing options for: The Baylor Bears And The Celebrity Hot Tub Party

NOTE: Confused? Don't miss the definitions and footnotes at the bottom. And if you hate numbers, just skip to the words.

In college football, where you count on about 24 players, minimum, to win games (or at least not lose them), there probably is no such thing as a true, program-changing athlete.  No matter how good a single player is, he's only going to succeed so much without a lot of help.  When you look at some of the more impressive turnarounds in recent college football history, there may have been a standout player, but he got a lot of help.  Andrew Luck first had Toby Gerhart, then had Stepfan Taylor, Owen Marecic and a killer offensive line.  Chase Daniel had Jeremy Maclin, Chase Coffman and Martin Rucker.  Pat White had Steve Slaton, Owen Schmitt, Quinton Andrews, and an opportunistic defense.  Et cetera.

In this sense, Robert Griffin isn't a program-defining athlete, a one-man team.  But he's just about as close as you can get.  Despite offers from Nebraska and Tennessee, among others, Griffin committed to the University of Houston in Fall 2007, opting to stay close to home and play for a coach (Art Briles) with whom he had developed a connection.  When Briles took the Baylor job, Griffin followed.  Three years and a knee injury later, Baylor was bowling for the first time since this was the number one song in the country.

Robert Griffin III is smart, loyal, likable, brutally tough, ridiculously fast, incredibly underrated as a passer, and in 2010, he led Baylor to any number of firsts -- first bowl since 1994 ... first AP ranking since 1993 ... first win at Texas since 1991 ... basically first anything good since around the time Grant Teaff left.

Unfortunately, like the water to James Brown's toes, Griffin and an extremely capable Baylor offense were burned too many times by a defense that was both experienced and completely unreliable.  The better the Baylor O performed, the worse the Baylor D performed; it was that way when Baylor was running out to a 7-2 start, and it was that way when they were losing their final four games of the season.  The defense held Baylor back in 2010, and at first glance, there's no reason to think the same thing won't happen in 2011.

If Adj. Points were real points, Baylor would have been the most dramatic team in the country in 2010.  Nine of their 13 games were played within eight Adj. Points, meaning Baylor and Random Perfectly Average Team would have had some serious knockdown, drag-out battles last season.  Of course, though their real games weren't particularly close (only four were decided by one possession, and all in October, strangely enough), they were certainly exciting in their own right.  At least one team scored 30+ points in every game they played last year -- they did it nine times, their opponents did it seven times.

It also means that Baylor's final F/+ rankings were almost perfectly in the middle of the FBS list.  They ranked 62nd out of 120 teams, one game above .500.  Their final scoring margin was +0.7, and their final Adj. Points margin was +3.7.  They were incredibly average all season, but they figured out ways to make average quite entertaining. 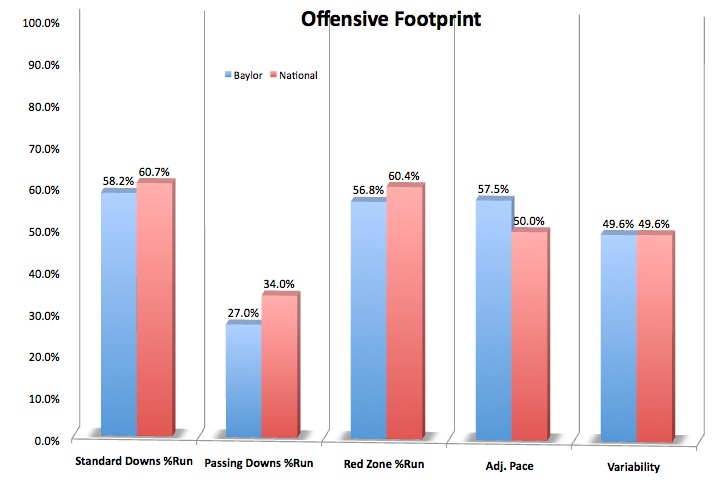 It's hard to get past the stereotype.  Robert Griffin III is really, really fast, therefore he's a running quarterback.  Not so.  He's a passing quarterback with wheels.  He's Steve Young, not Brad Smith.  Art Briles trusted his arm enough to have it throw 35 passes a game last season, and it quite clearly paid off.  Griffin completed 67 percent of his passes for 3,501 yards, 22 touchdowns and just eight interceptions.  For his career, he has completed 64 percent of his passes at well over seven yards a pop, and he has a 41-to-11 TD-to-INT ratio.  That he's also able to throw in 60 yards per game on the ground (769 yards and a +4.1 Adj. POE in the 2010 season) is just a bonus.

Now for the even scarier news: he's somehow still just a junior.  He tore his ACL just nine quarters into the 2009 season against Northwestern State, earning an injury redshirt; of course, the injury didn't stop him from going ahead and playing two more quarters, completing 13 of 19 passes, and rushing three more times after the injury.  Did I mention he's tough?  He's tough.

(He's also confident.  When Texas attempted to recruit him as an "athlete" during the summer of 2007, he shot them down.  "I'm a quarterback."  Not that Texas could use a dynamic quarterback right now or anything...)

Not only do the Bears get Griffin for two more seasons, but they also get just about everybody else back from last year's consistently stellar offense as well. Few teams were as balanced as Baylor -- they ranked between ninth and 13th in four of five major Success Rate categories, between 22nd and 29th in all five major PPP+ categories.  Four of five linemen ... five of six top passing targets ... two of three top running backs.  Art Briles has built some lovely offensive depth to go alongside his star. 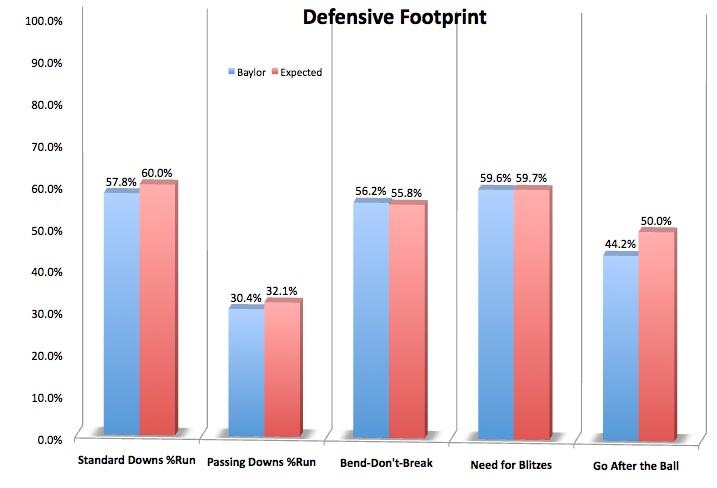 First things first: though Baylor's defense was absolutely the weak link in the Bears' season, and though they really weren't particularly good at anything (other than third-quarter defense, apparently) ... they weren't quite as bad as their Total Defense rankings would suggest.  Baylor ranked 104th, allowing 435 total yards per game, but they also played TCU, Texas Tech, Oklahoma State, Texas A&M and Oklahoma.  They were brutalized by some rather strong offenses, which helps their cause a bit.  But only a bit.  Because if they'd even been average, Baylor could have threatened for ten wins a season ago.

Wrecked a decent amount by injuries (eight players who were at least spot starters missed time to injury), Baylor just couldn't keep from blowing some of their offense's gains.  Monstrous defensive tackle Phil Taylor was taken by the Cleveland Browns in the first round of last month's draft, but despite his own impressive-for-a-tackle stats (48.5 tackles, 7.0 TFL/sacks), Taylor couldn't do the linebackers enough favors, apparently.  Though Antonio Johnson, Elliot Coffey and Chris McAllister all had their moments (they combined for 13.5 TFL/sacks), the linebackers were the primary reason why Baylor's line ranked 66th in Adj. Line Yards, but the defense as a whole ranked just 93rd against the run.  Johnson and middle linebacker Chris Francis are gone, but their production was exceedingly replaceable.  Taylor's presence, on the other hand, could be missed.

Do you really see me passing up this golden James Brown opportunity?  How about a little "There Was a Time"?  Because there was a time Robert Griffin wasn't a Baylor Bear, whether you want to believe it or not. 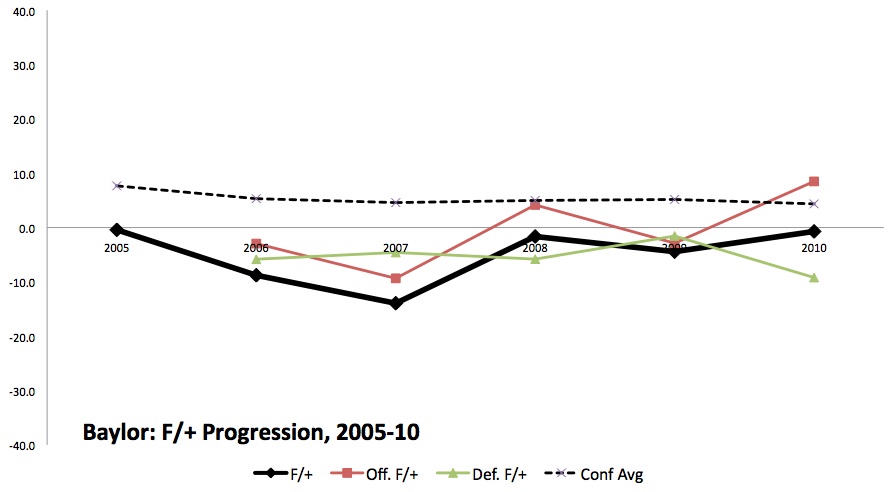 Baylor's average home attendance was 40,043 in 2010.  This is obviously a modest total for a football-crazy conference like the Big 12, but it was also their best season average since 1991 and their sixth-best of all-time.  Win games, and the fans will come, but Baylor hadn't won in a long time.  To say the least, there is plenty of opportunity to draw big crowds and score big wins on the 2011 schedule -- Baylor hosts Oklahoma, TCU, Texas and Missouri among their seven home games.  But quite a few indicators suggest Baylor is just as likely to regress as progress.

For starters, Baylor recovered an inordinate amount of fumbles in 2010.  They went 3-1 in close games last year, recovering 11 of 18 fumbles in those games; a shift of a couple turnovers could have made the difference in one or two of those games and completely redefined Baylor's turnaround year.  (Among other things, they fumbled five times against Texas but recovered four of them.)

Beyond that, it's hard to imagine the Baylor offense improving too much -- they were already at a pretty high level -- but it's a lot easier to imagine their defense regressing with the loss of Taylor and some key defensive backs.

The key to reaching bowl eligibility again will be a fast start.  The Stephen F. Austin, Rice and Iowa State home games are obviously essential wins, but it would behoove the Bears to knock off Kansas State in Manhattan and get to 4-1 (or 5-0 with an upset over TCU) as well.  Of BU's final seven opponents ... five will likely be ranked in the preseason top 25 (at Texas A&M, at Oklahoma State, Missouri, Oklahoma, Texas).  Yikes.  This is a tough schedule to maneuver, and though we can guarantee Baylor will be all sorts of entertaining -- as long Robert Griffin is on the field, I'm watching -- it's hard to guarantee that they will continue to rise as a program.  Prove me wrong, Hot Tub.